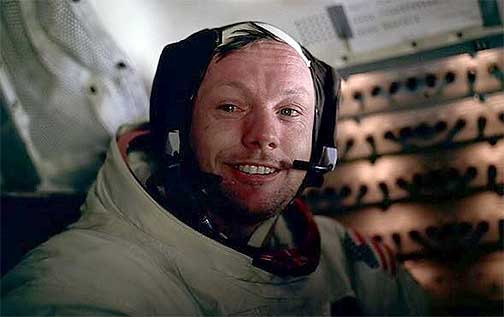 “It’s an interesting place to be. I recommend it.” – Neil Alden Armstrong

Alden – a poem for Neil Armstrong

Then one after one they woke to leave, fading to the background of cosmic lore
To the kingship of having been the first of humankind’s revelation four
Yuri left us first, now Neil departs, Tina and Buzz remain, fitting for a Halfdane
You should mark the middle on your sturdiest horse, lifting back the astral mane

Neil Armstrong, you stood for all of us, as the first human, a fish out of water test
And politicians rarely matter as much as our foremost souls on a quest
Opening to great black pinhole lit up canopy above, past the stellar door
Into the arms of the harsh mistress, that desolate abandonment, to see what’s in store

You are our future’s ancestor, breaking the thin membrane of the surface of dust
There is Collins to be sure, and Glenn and Shepard as well, and acknowledge them we must
But it was you whom we picked to place our collective foot beyond the human realm
It was your sinews we trusted to guide your foot, muscle, bone, ligament, your whelm

“I am a friend, comrades, a friend” said Yuri on his return, as are you Old Friend
Who are we to challenge the vast reaches, our seed, our flesh, our souls to send?
Gone now to be elevated to a constellation I should hope in utter bliss
On the lips of one man, a single moment when the earth foot and the alien soil, kiss

The Gods have you now ranking along with Jason and Odysseus, first to see the unseen
Our cloud, our strongest pitch, our javelin thrust to the sky, our reach, our gaze, so keen
The dust has long settled, and we have yet to comprehend what we have done
Unsure of our own potential, bickering in the reflected light of the sun

As your feet set down, so far from this precious swarming hearth and home
To peer back at the blue marble small gem lit up Terran dome
Did you pray for us silently in the eternal infinite night
That we should – in spite of our differences – rejoice and unite?

Did Yuri pray for that, was he allowed? Did Aldrin, did Tereshkova pray?
Did John, or poor Michael left alone in womb like orbit, did he? Did we stray?
Along some strange mad hunt for the ultra natural trajectory
Did we battle the wrong wars, did we fall back to earth, enslaved by gravity?

To the Stars! To the Moon! Beyond the Blue Event Horizon!
Look out Zeus, look out Ra, Odin, Kukulkan, Gods of Old, Diana, man’s son…
…cometh on wings of rocket fuel, an American sails the Astral, a mare man!
Make a space on Mount Olympus for him, he ranks the equal to none.