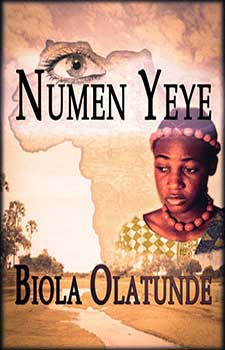 Princess Numen came to the planet earth with a mapped out mission of how to help mankind especially those around her to fight forces of darkness that might want to destroy them. However, once she was born, she had trouble linking to her spiritual world from where she came. She could not understand the sudden insight about happening around her that comes to her inner being at intervals.

However, her grandmother had no liking of her because of her wicked plan which was thwarted by the goddess that she sees as mere slip of a girl. Her several attempts to destroy Numen whose earthly name is “Imole Ife” failed and her hatred for her young granddaughter grew.

Imole Ife who was known to her mother before birth became estranged from her when she was growing up because the woman could not understand the strange daughter that fate had bestowed on her.

On the earth plane, three people had been her mainstay, her maternal grand-mother, Yeye at the shrine and her father. Her rapport with these people had helped her stabilize until she found her true self by discovering her link to their eternal roots. It was only then that she found peace and she could easily tap into the power that she could use whenever she needed to help anyone in distress. Her understanding and insight was so awesome that people began to respect her and see her as the high priestess that she was.

The novel is about intertwining worlds and it teaches about predestination. The novel also her satiric properties as the readers become aware of the ills of polygamy and extended families. It also gently scoffs at Nigerian’s show of religiousity which had not helped in solving our problems. It also encourages female education.
The author has outdone herself. Her understanding of man’s existence and the importance of understanding his purpose in life is portrayed in Imole Ife and her desire to understand her mission in life.
Really, I want to say the readers who know Biola Olatunde and the richness of her prose could not have expected anything less that the dexterity she exhibited in “Numen Yeye”.

Fehintola stayed silent in the other room and cried as she listened to the sounds of passion from the bedroom of her husband. She had stopped attending social outings with her husband because she was afraid of the pitying looks. She could not be angry nor could she make demands so she became a prayer warrior. Fehintola prayed to the Lord to remove the rebuke, and shame the devil that made each pregnancy an agony of nine months wait and a tragedy of birth. She was labeled as the harbinger of sorrow as each time she gave birth, the child never stayed long enough to welcome a younger sibling.

She knew what that meant. She was being punished by a spirit child, or in her language, an abiku, which had taken an interest in her. Some of the births were very painful as the child would wait long enough for love to blossom in her heart and then leave very quietly. The child would have a slight fever, and before she could do anything, the infant would be gone.

Her husband was tired of coming to her bed for she knew he was asking himself what was the point of all the passion if he was going to have to bury another child. Some evenings, Fehintola would stare into space unaware of her surroundings, just wishing she would die, and then shiver that such thoughts should come to her.

One morning, a simply dressed young woman knocked on her door, and gave her a beautiful smile. Fehintola stared at the lady wondering who she wanted to see. The lady identified herself simply as a priestess and an usher in the house of the goddess Numen Yeye.

Shocked and surprised she stared as she was told by the quiet, unassuming young woman to be at the shrine to respond to the summons from Numen Yeye.
Fehintola blinked and shook her head even as she sent her respects through the young virgin to Numen Yeye. It was an honor to be visited by the priestess of Numen Yeye but how was she going to explain that to Ayo? The young woman who simply asked to be addressed as Yeye, smiled. ”It is to ensure that Numen Yeye, when she comes, is given the right surroundings,” she had finished.

“Numen who?”
“You are to be pregnant again and we have decided that this is the final time Numen Yeye would try to cross the bridge into you. If we do not mend the bridge, she will not come and you will remain barren.”
Fehintola was electrified by the information and tears came to her eyes. She was suddenly resolute—she was going to keep the appointment with Numen Yeye.

Ayo was skeptical when she told him of her encounter. He gave her a long look, Fehintola sensed that he was maybe wondering if she was half way insane. The last death had almost unhinged her and she suspected her husband was not sure of trying again.

“Please, Ayo, I understand it is my last chance,” she pleaded in desperation. 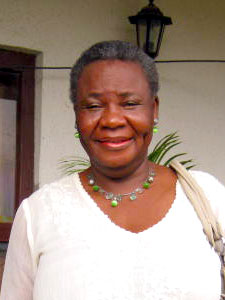 Biola Olatunde is a Nigerian novelist, poet and screenwriter, with a wealth of writing experience.

Her foray into novel writing is one of her later efforts, and her first novel, Blood Contract, was published by IFWG Publishing, and has received critical acclaim.

It is important to make a point about the writing style. Biola Olatunde is an accomplished poet, and her narrative has a strong poetic influence, which is well suited to the subject matter of the novel.

Additionally, she wrote her novel in Nigerian English, and the conversion of it into US English was a long and meticulous project, the aim being to translate, without losing her style and the ‘feel’ of the Nigerian language.

Readers will understand this careful balance the moment they read the first few paragraphs–we make no apology, we are intensely proud of our achievement.

Biola has written more than 200 TV and Radio plays for international orgainsations in Nigeria including 104 episodes on teenage sexuality for UNFPA, democracy and family health for USAID, and was given a distinguished Alumni award by her alma mater University of Ife for her contribution to the legacy of Art.