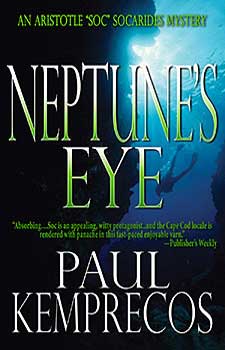 Superstar author, Paul Kemprecos is at is again. Soc is hot on the heels of his next adventure.

Mr. Frederick Walther hires Aristotle “Soc” Socarides to find his daughter Leslie who’s been missing for more than a month. Her employer Doctor Thomas Drake (of Neptune Technologies, Inc.) is suspicious and the one to look at as far as her father’s concerned.

John Flagg, a man whom Soc shares a complicated past with, pops up and has a definite agenda, which Soc’s desperate to learn of and stay away from all the while doing what he was hired for.

From Walther’s butler Winston Prayerly, Jane Drake—Tom’s wife, Sharon Prescott his receptionist at Neptune, Skip Mallowes a resident diver, and everyone else in between, Soc has a boatload (forgive the pun!) of prospects to wade through before he uncovers various truths not to mention Leslie Walther.

This is a rewrite for Kemprecos, or should I say resubmission (published in 1991) to the reading world in the modern format and we are very lucky for his decision to do so.

He was way ahead of his time when he first wrote this book with Flagg’s association with the Civil Operations and Revolutionary Development Support cadre or CORDS unit, to an underwater robot known as a Remote Operated Vehicle (ROV), to an AUV, Autonomous Untethered Vehicle known as Neptune. I have to say I was captivated at every moment.

Of all the books I’ve read, Kemprecos’ “Neptune’s Eye” has kept me the most rapt with the passionate need to turn the page no matter where in the book I was reading.

He made me care about every character even the “unlovable” ones and done so flawlessly. And I’d be remiss if I didn’t give a wink and a nod to Kojak, Soc’s faithful at furry roommate.

When something happens in his stories, as a reader, there is a distinct response.

There isn’t enough paper to review the perfection that is “Neptune’s Eye” and its stellar qualities so I’ll end simply with, “Encore Kemprecos!”

1945
The sound of doom was remarkably prosaic.
It came as a muffled metallic crash, like a firecracker going off inside a distant rubbish bin. In the control room at midship, the commander took his eyes off the dial of the depth gauge he’d been studying and cocked his head to listen. He frowned in puzzlement. The noise was like nothing he had ever heard in years at sea.

A second explosion reverberated through the boat’s pressure hull, louder this time. Even as the echoes faded, another followed. The bearded helmsman and the equally bewhiskered hydroplane operators turned to the commander and watched his lined and weary face intently, waiting for instructions.

There was alarm in their eyes. The commander calmly reached for the microphone hanging from an overhead cable and barked the order.
Close all watertight compartments.

The whole procedure, from the first explosion to the commander’s directions, took about ten seconds. It might just as well have been ten years. As crewmen from one end of the boat to the other raced to follow orders, a deafening blast, louder than any that preceded it, rocked the pressure hull.

The deck lurched violently. The commander was thrown off balance. He wrapped his arms around a vertical conduit pipe attached to the arched bulkhead and kept his footing. The crewmen grabbed onto the controls to keep from being flung from their seats. The boat shuddered and listed toward the stern. The diesels died. Forward motion came to a halt.

Water had entered the engines.
They were sinking.
The commander called for battery power to keep the boat moving.
The control room went dark. Water in the electric motors.

The auxiliary power system came on, bathing the control room in a dim red glow. The commander glanced around at the hellish scene. Incredible. A minute ago they had been peacefully cruising at snorkel depth, recharging their main batteries. All was calm. All was secure. All was routine. All organized. Now this. Within seconds. Pandemonium.

He responded coolly. He had a reputation for a methodical go-by-the-book attitude that bordered on the phlegmatic. It was the reason he had been picked for this important mission. He ordered the crew to dump ballast. Compressed air hissed into the main ballast tanks.

The boat continued to sink stern-first.
They blew water from all the tanks. The added air should have been more than enough to restore buoyancy, but the boat plunged further.

The nose-up angle of descent became sharper. The emergency lights went out. Anguished shouts of panic in the darkness. Thuds and crashes. Bodies and objects smashed into the steel bulkheads.

The commander slid down the pipe and sat on the floor. Crouching in the dark, strangely detached from the bedlam around him, he knew it was over. He wondered briefly about the steel box in his quarters, if its contents were worth the end of his fine new vessel and its young crew.

Water was pouring in from the stern, surging from compartment to compartment, lapping around his feet. Strangely, instead of fear, the commander felt a serenity he had not known since the madness began in his country.

Die decently, the higher-ups had said. What a laugh. As if men could be ordered to go with dignity when they were gagging under tons of seawater. He twisted his mouth in scorn. And moments later, when death finally found him, his lips were still frozen in a rictus of contempt. 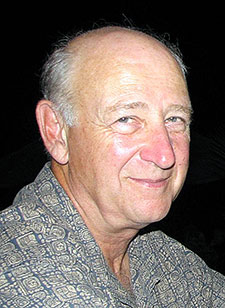 Paul Kemprecos:
My fiction-writing career owes it start to the bad navigation of an 18th century pirate. For it was in 1717 that a ship, the Whydah went aground, reportedly carrying a treasure. In the 1980s, three salvage groups went head-to-head, competing to find the wreck. The controversy over the salvage got hot at times and I thought there might be a book in their story.

I developed my own detective, an ex-cop, diver, fisherman, and PI named Aristotle “Soc” Socarides. He was more philosophical than hard-boiled. Making his first appearance in “Cool Blue Tomb,” the book won the Shamus award for Best Paperback novel. After many years in the newspaper business, I turned to writing fiction and churned out five more books in the series.

Several months after the release of “Bluefin Blues,” Clive called and said a spin-off from the Dirk Pitt series was in the works. It would be called the NUMA Files and he wondered if I would be interested in tackling the job. My wife closed the deal when she said: “What else have you got to do?” The answer was “nothing,” and I took on the writing of “Serpent” which brought into being Kurt Austin and the NUMA Special Assignments Team.

Austin had some carry-over from Soc, and another team member, Paul Trout, had been born on Cape Cod. The book made The New York Times bestseller list, as did every one of seven NUMA Files that followed, including “Polar Shift,” which bumped “The DaVinci Code” for first place.

I continue to write and am working on the e-book release of my Soc series. Christi and I live on Cape Cod where she has her own financial services business. We live in a circa 1865 farmhouse with two cats. We have three children and seven granddaughters.