An often asked question, over the years in Country Music People. Why don’t we in the UK get the major US stars on tour anymore?

The answer is two-fold, both equally important. First, the cost of the tour over here would far out weigh the CDs sold, so no matter what you gained in new fan coverage, you would lose in costs. Secondly, tied in with this is that other than three or four major venues. There are few stadia that could accommodate the likes of Garth Brooks. Those are far between, the Millennium stadium in Cardiff might be able to, stadia like Wembley, Old Trafford or even Hampden Park or Ibrrox Stadium in Glasgow would be over-stretched.

There is nowhere south of Birmingham or North of Manchester that could cope with his entourage. Which brings me to the next part, gone are the days when a singer put his/her guitar in coach and went on tour, GB’s many speakers and show-stopping lights fill up about four lorry loads. UK roads are not like the five-lane US Highways. 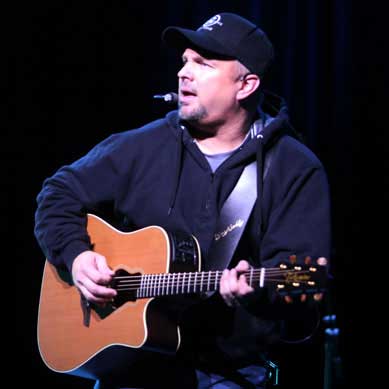 Not being up to date with European capacities for stadia, the ones that come to mind that may be big enough are San Siro in Milan, Olympic stadium in Munich, the two main Spanish ones in Madrid and Barcelona.

Back in the 1970’s when I could get out to shows, I saw many of the then big names. Johnny Cash (twice), the Everly brothers, Roy Orbison, the late Johnny Paycheck, Hank Williams Jnr., Slim Whitman. None of whom had a massive floor show as they were singers. If I want a showman, I would get a ticket for the circus.

A similar incident happened to me, many years ago. When I could sit and watch a show. I went to see US singer Kim Richey, in Bristol. I wanted to see her, most of the crowd went to see UK folk singer Richard Thompson. Kim did her act with a few small speakers, standing on stage and got a standing ovation.
During the interval, I was watching the crew bring in speaker after speaker for Mr. Thompson, I thought he must be good. I never got the chance to find out. When he came on stage, he was making so much noise, I say noise as I could not tell what notes were played.

I was fifteen feet from a wall and was physically ill from the sound waves. It was like being hit in the stomach with a hammer for ten minutes. After four songs, I had to leave I was getting a serious migraine and the hammering had me close to vomiting. There was so much noise he could have played Mahler’s 5th symphony out of tune and off key, nobody would have known.
If I buy a ticket to hear a singer, I expect to hear songs not be bombarded by sound or just see a show. If they are that good, why do the detract from their singing by having such big shows? Back in the 1970’s, the great stars then never needed it.

Probably my biggest mistake was listening to Bob Harris on the radio and not following my usual plan. Normally, I would go to the show and after listening to the singer, get a CD on the way out. On this night, I took Mr. Harris’s advice as he espoused the joys of singer Kathleen Edwards de’but CD (Failer), I got the CD, on the way-BIG MISTAKE.

Here is a young girl trying to make a good impression for her first CD. She made an impression all right, not the one she wanted to though. Her CD was country, the show was more akin to Deep Purple. In the hour or so she was on, she sang only three songs from it. It was unfortunate, being as we were a church social club, there was a wake that night.

But, there is no accounting for her behaviour to everyone. From promoters to crowd, bar staff to wake goers she insulted everyone. The only people saved from her tongue were the band, from their faces I got the impression, they just wanted to disassociate themselves from her. My view is she saved them from insults as she knew she would be with then for the tour. As she left the stage, all she got was total silence.

The following evening of this Canadian double-header was the delightful singer Susie Ungerlieder, she could not be more different, when I told her of Kathleen. She could not apologise enough.