March 17, 2003: The overture echoed through an elaborate theater as I sat, eagerly awaiting a show. 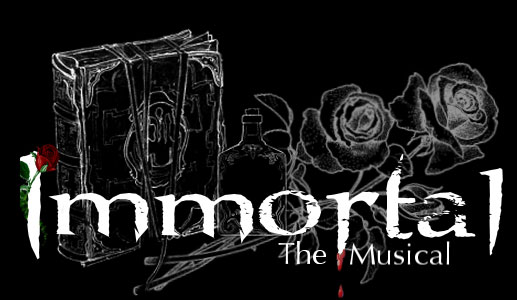 Lights dimmed and velvet curtains parted to reveal a lone figure silhouetted against blue light. His voice echoed over us, the very essence of solitude, of longing as he lamented the curse of immortality.

And then I woke.

I scrambled to my piano (keyboard), fumbling in the early dawn with pen and paper to capture the singular moment.

It worked. In fact, the next week of my life was a whirlwind of midnight wakings and crazy writing sessions.

The story literally fell into my lap, like the pieces of a puzzle. What started as a dream bloomed into a three (now 2.5) hour musical opus.

It was never my life’s ambition to write a musical. Maybe a CD. One day. One distant day. I often wonder, why me?

Why should I be inspired with a musical for which I have NO formal training, NO connections, and NO finances to promote?

The answer is not because I wanted it. I had to.

4.5 years we’ve been bouncing between NYC, upstate New York, and now Florida. After many false starts, we’ve arrived at the cusp. It is time for Immortal the Musical to meet the world.

Jack Eason May 10, 2012 5
My Circle of Friends With the exception of a handful of personal friends who I’ve known for years, most of my…
Publishing