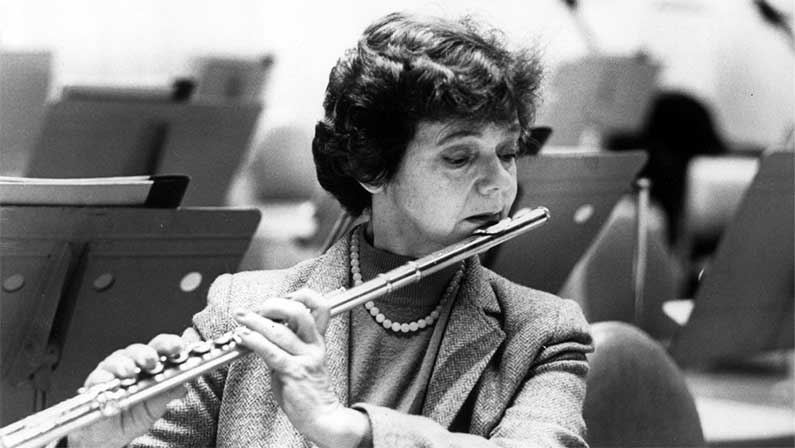 The first woman to hold a principal chair in a major American orchestra, Doriot Anthony Dwyer played the principal flute for the Boston Symphony Orchestra for thirty-eight years.

Leonard Bernstein called her a genius. Considered one of the top orchestral flutists in the world, Doriot appeared on dozens of recordings with world-famous conductors. But getting there wasn’t easy.

She was born in 1922 in Streator, Illinois. Her mother, Edith Anthony, had played flute in the Chicago Women’s Symphony and toured for several seasons on the Chautauqua Redpath circuit. But marriage and four children ended that. Doriot later said, “My mother was a great artist. She used the instrument to sing, and she had a huge, beautiful sound.”

At the age of eight, Doriot began studying flute with her mother. One day she heard a Chicago Symphony performance on the radio. Inspired by principal flutist Ernest Liegl, Doriot made up her mind to become an orchestral flutist, a dream her mother encouraged. Doriot’s father was a cousin of Susan B. Anthony. Doriot’s mother admired the famous suffragette and told Doriot never to put herself down because she was a female.

Precociously talented, Doriot began taking lessons with the flutist who had inspired her, Ernest Liegl, in 1934. Only twelve years old, she rose at dawn to take a four-hour train ride to Chicago, followed by an hour-long elevated train ride to Liegl’s studio. For five years, Doriot made this arduous journey twice a month. Liegl recommended further study, but he had little reason to expect that she would ever win an orchestral position. At that time, few major orchestras hired women, other than harpists.

In 1939, Doriot applied to the Curtis Institute of Music, but she was rejected. That summer she attended the Interlochen Music Camp. Her fine playing drew the attention of Howard Hanson, director of the Eastman School of Music in Rochester, NY. He offered her a scholarship. At Eastman, she got a taste of the gender bias she would later encounter in the music business. During her four years there, she auditioned to play principal flute chair in the school orchestra four times. She never won. However, she did win the second flute position with the National Symphony in Washington in 1943.

In 1943, orchestral conductors were happy to hire women to fill positions vacated by men who were fighting in World War II. Most were forced out when the men returned from the war, but National Symphony conductor Hans Kindler said, “The women had proved themselves not only fully equal to the men but sometimes more imaginative.”

He declined but gave her a pass to the CBS studio to hear the rehearsals and concert broadcasts. Doriot called it a fine learning experience. “They practiced and went over things and I saw the whole thing for an entire year.”

For three weeks, she played in the Paramount Theater jazz band accompanying Frank Sinatra. The pay was good, the level of musicianship high, the flute parts challenging. “Sinatra was really an artist,” she later said. “Very good jazz singers are true artists: they never do the same thing twice.”

Los Angeles and the Hollywood Bowl

In 1946, she played principal flute in an orchestra for a touring ballet troupe. It was gratifying artistically, but the tour folded in Dallas. Seeking better opportunities, Doriot took a train to Los Angeles. Six months later she was playing lucrative jobs in recording studios, primarily because she was a fine sight-reader, a skill she credited to her experience playing new music at Eastman. She auditioned for the second flute chair in the Los Angeles Philharmonic and got the job.

Her big break came when conductor Bruno Walter appointed her principal flute of the Hollywood Bowl Orchestra, a challenging job with a concert almost every night of their 13-week season. Walter then chose her to play the principal flute in a radio orchestra similar to the NBC Symphony. The repertoire was difficult, but it gave her valuable experience as a principal flutist, an experience she would soon need.

Prior to the 1960s, orchestral jobs were rarely publicized. Many section positions were filled by students of the principal player. However, in 1952 the Boston Symphony Orchestra announced auditions to replace retiring principal flutist George Laurent. Doriot quickly sent in an application that she signed “Miss Doriot Anthony” to avoid any confusion about her gender. At that time, applicants were usually male musicians invited by the conductor. But Charles Munch decided to hold a “ladies day” audition.

Doriot later said her invitation to audition for the BSO was “the greatest thrill of my life!”

She went into heavy training. Here was her chance to fulfill her dream of playing principal flute in a major orchestra, and she wanted to play her best. For two months, she practiced for hours every day until she could play the audition music from memory.

Her BSO audition lasted more than three hours. Boston Pops conductor Arthur Fiedler asked her to play the flute solo from Grieg’s Piano Concerto. They couldn’t find the music, so she played it from memory. After a while, she played everything from memory. “What do you want to hear?” she asked. “I’ll just play it.” She later said, “They were knocked out by that.”

Nevertheless, gender issues arose. They asked if she planned to marry and have children. She did but told them it was none of their business. When they asked her to come back in two weeks and audition again, she refused. Two months later the offer came, but it said nothing about money. Told she would get the usual sum, Doriot asked for more and got it. “It’s a lot of money for a little girl,” said the manager.

To which Doriot firmly replied, “It’s a big job.”

No Facilities and Fashion Critics

In 1952, Symphony Hall had no backstage facilities for women. The only other woman in the BSO, a harpist, offered to let Doriot change inside her harp’s hard case. Doriot declined and asked for a proper dressing room. The BSO management assigned one of the backstage rooms reserved for soloists to her.

One critic noted that Doriot dressed unobtrusively in a long-sleeved, floor-length black dress. Another said she “dressed well without aiming at spectacular effect, and her lipstick, though generously applied, is the right shade for her coloring.” [Boston Globe, 12 October 1952]

But Doriot had nothing but praise for her BSO colleagues, who welcomed her warmly. She later said, “I encountered more prejudice in the press than I did in the orchestra.”

During her thirty-eight years with the BSO, Doriot won critical acclaim for her performances under famed BSO conductors Charles Munch, Erich Leinsdorf and Seiji Ozawa, and equally famous guest conductors Georg Solti and Leonard Bernstein. Many of these performances were recorded.

In 1963, the orchestra established the BSO Chamber Players, principal players of the string, woodwind, brass, and percussion sections. Doriot was the only woman. In addition to concerts in Boston, New York City, and at Tanglewood, the group toured widely and recorded for Nonesuch and Deutsche Gramophone. For many years, Doriot taught at New England Conservatory, Boston University, and the Tanglewood Music Center. Many of her students, male and female, won major orchestral positions after graduation.

When Doriot decided to retire, the BSO commissioned Ellen Taafe Zwilich to compose a concerto for her. Doriot gave the premiere performances of Zwilich’s Concerto for Flute and Orchestra in April 1990.

“I love the piece,” Doriot said. “Every note counts, and there are a lot of notes!”

By then, the newspapers had changed their tune. The caption below a photograph of her in the Boston Globe said: “Doriot Anthony Dwyer, a living legend of flute playing.”

She continued to play recitals and to record chamber music for flute and strings for Koch Records. On April 30, 2012, she was inducted into the Rochester Music Hall of Fame. At age 90, she wowed the audience by playing one movement of Darius Milhaud’s Sonatine for Flute & Piano.

Quoting the Music Hall website: “Fifteen hundred people filled the Eastman Theater for the first induction ceremony of the Rochester Music Hall of Fame. It was a historic event, filled with tears, laughter, stories, and most importantly, music.

One highlight of the evening: Ninety-year-old flutist, Doriot Anthony Dwyer, gave a deeply moving performance. She was introduced by Susan Fleet,  a music historian, and musician, who really helped us understand the barriers that Doriot broke down by her sheer talent and determination. There were few dry eyes in the audience after this induction.”

At a time when few women played in major U.S. orchestras, Doriot Anthony Dwyer achieved her goal. Thanks to her prodigious talent, steely determination, and tireless effort, she became one of the top orchestral flutists in the world. At this writing, she still lives in the Boston area.

You can watch Doriot perform with the BSO, conducted by Charles Munch in a 1962 performance: “Danse generale” from Daphnis et Chloe – Suite No. 2  Wait for the end to see Doriot get a solo bow!

Susan lives a life of Music and Mayhem. She took up trumpet at eight and was playing professionally at fifteen.Then she got in touch with her dark side. New Orleans is the setting for her award-winning crime thrillers, ABSOLUTION, DIVA and NATALIE'S REVENGE. Susan has taught at Brown University and Berklee College of Music. Her e-book, WOMEN WHO DARED: Trailblazing 20th Century Musicians features violinist Maud Powell and trumpeter Edna White. She blogs about crime at http://darkdeeds.susanfleet.com/index.html