Those of us of a certain age remember the primitively-done but beloved animated series, Clutch Cargo

(1959). But even some of that boomer demographic don’t recall the outer space adventure show, Space Angel (1962-1964), created by Dik Darley. Produced by the same production company as Clutch, Space Angel employed similar art techniques and film “ technology” as well. 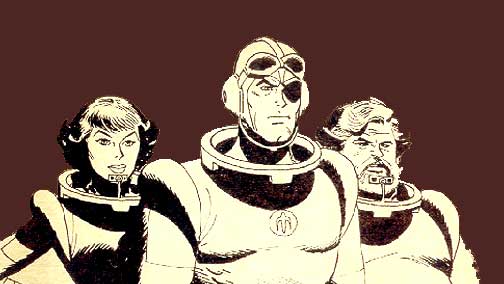 Clutch Cargo and Space Angel Gave Everybody Lip
Because of budget constraints, Cambria Productions created Clutch Cargo utilizing a process they referred to as “Synchro-Vox.” This allowed actual human mouths to be superimposed on still drawings of the show’s characters. The only “animation” was the moving lips! Cardboard cutouts were shuffled around sometimes to give the effect of movement but Clutch was just a still image in search of motion.

The Evening Star: Headquarters for Galactic Law and Order
Space Angel, aka Scott McCloud, was an agent for the EBI (Earth Bureau of Investigation). He and his teammates, Professor Mace, Crystal (Mace’s daughter and potential love interest for Scott) and Taurus, a Scottish mechanic, based their operations out of the space station Evening Star. In very short, five to six-minute episodes (a whole show being 4 or 5 of these), Scott would fight evil and corruption of the interstellar kind.

These short segments actually contained a lot of story elements with each episode ending in a cliff-hanger. The characters were stereotyped but appealing–a lot of friendly bantering was carried on between Scott and Taurus (“You old space goat!”) and Crystal was depicted as an intelligent and daring crew member. Although her flirting skills were strictly out of the forties (“Scott McCloud!”, “Hmmphh!”, “Now, you apologize.”). Hey, even the original Star Trek didn’t always get that right.

The villains were bad, bad, bad and always sinister-looking. One female baddie was obviously modeled after the Egyptian Queen Nefertiti, complete with skyscraper-tall hat! Apparently “Space Angel” was Scott’s code name for the EBI but it was never explained why he wore an eyepatch. He looked very cool though and always saved the day.