“There’s not much to say about acting but this,” James Cagney once said, “Never settle back on your heels. Never relax.

If you relax, the audience relaxes. And always mean everything you say.” That being said; it was a real treat viewing Man of a Thousand Faces. In this film, James Cagney plays Lon Chaney, the true life horror legend. By the way, the movie was smartly cast, written, and shot like it was a film noir film, yet it was a biographic work. In the beginning of the movie, we see a young Lon Chaney coming home, a victim of bullying to a home where his parents were mute.

He then went on to become a Vaudeville star, marrying his first wife, played by Dorothy Malone. To play mime is an art form and James Cagney nailed it. If one thinks of such an actor, his 30’s and 40’s gangster personality manifests. Public Enemy, Angles with Dirty Faces, Roaring 20’s, Yankee Doodle Dandy, White Heat, Kiss Tomorrow Good-bye, and later in his life he returned to star in the movie version of Ragtime. It is hard to imagine such an actor playing Lon Chaney. 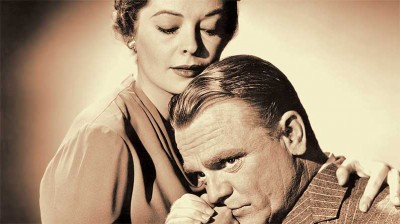 When his first wife meets the parents, sees them communicating in the language of the deaf, she wants to get rid of her unborn son. They argue about that; she keeps it and has the son. Soon they learn the son is healthy, but the first wife want her career in Vaudeville back. I can’t imagine telling a woman she is not to act in Vaudeville! Any hoot, the son grows into a child. Both actor parents see other people. In fact, the first wife came back to catch her husband with Jane Greer, which his character would go on to marry. So the film has drama. A divorce happens, the son lands up in an orphanage.

Chaney then leaves New York, goes to Hollywood, where he finds himself, playing background actors. This is where the real magic of Old Hollywood comes alive. Look at Cagney play Lon Chaney, and through Chaney the character, he becomes other people. How does he do it? At first, he draws a character in a scrap book and then takes his trusty makeup kit, and creates a physical larger than life character from the scrap book picture.  Robert Evens gets introduced and plays a legendary movie producer, Irving Thalberg.

“In order for you to create an outsider,” Thalberg would tell Chaney, “I got to find out what makes an actor tic. So I went into your history and found stuff out about your parents.” Do today’s movie bosses do the same thing, or say the same things to actors? Going back to Thalberg and Chaney. Think of Thalberg, seeing Chaney being raised by mutes, going through a divorce, and the ordeal with his son, and other experiences along the way. The real magic of transformation is the show in itself. Through Chaney, we see the recreation of the Phantom of the Opera, a Vaudevillian clown, a creepy old lady, and Quasimodo from Hunch Back of Notre Dame.

An artist that appreciates the sight of artwork will notice the treasure trove of drawings on Lon Chaney’s wall in the film, and in the art book too. Lon Chaney does get back with his son and marries a second wife, played by Jane Greer. The son grows up, learns his mother is not dead, and leaves home to be with her.

Chaney stars in many more films. Only near his death does the son return to his father. Yes, the movie was remade, but I encourage movie viewers to rediscover this 1957 classic. And to think I only know Lon Chaney JR through countless viewings of Abbott and Costello Meet Frankenstein, all gems from another era.

The Way that Sorrow Moves