Coming of age stories normally are not my preferred genre in books or movies, but I had the chance to see the movie for free on our long flight back from Germany recently.

Hazel Grace Lancaster (played by Shailene Woodley) and Augustus Waters (Ansel Elgort) are no ordinary teenagers who experience first love. They are both cancer patients. Hazel suffers from thyroid cancer that has spread to her lungs. Her constant companion is an oxygen tank. She attends a cancer support group willy-nilly but is depressed about her fate at 17 and lack of social life. 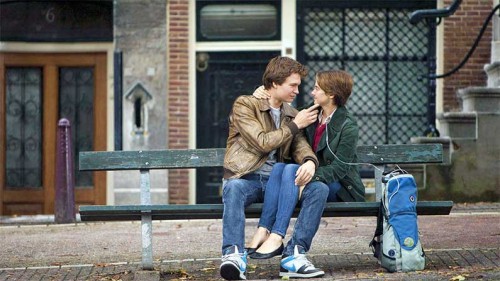 Hazel is just about to quit when Gus appears on the scene. He suffers from osteosarcoma that caused him to lose one leg. He is a cool and debonair character despite his plight and can joke about his prosthetic leg. They are kindred spirits who share an acerbic wit and bond instantly. Their lonely lives change. They fall in love for the first time while coping with their illnesses and looming death. That spark, that energy and the joy they feel take them out of their hole.

Together they go on the biggest trip of their lives; a last adventure facilitated through a charitable foundation. It’s Hazel’s dream trip to Amsterdam to look up the author of a book that impressed them both profoundly. The book was written by the author, Van Houten, who had lost his daughter to cancer. The viewer gets glimpses of beautiful Amsterdam and a romantic setting in a restaurant.

The film becomes even more emotional when they visit the Anne Frank house as Hazel struggles to make it up the stairs. When she does, she and Gus exchange their first kiss. Other tourists in the room applaud. That night they consummate their love. Bliss.

In the end, the inevitable happens. Be warned, the movie aims straight for your tear ducts. Reviews range from calling it a blend of philosophical and witty to melodramatic and sick-lit, “filled with staccato bursts of humor and tragedy.” (Jodi Picoult, author of My Sister’s Keeper). But this is the thing about this story; there is a balance between the joy and the sorrow we feel, the youth and the wisdom, the pain and the pleasure.

The title of the movie is taken from Cassius in Shakespeare’s Julius Caesar: “The fault, dear Brutus, is not in our stars/ But in ourselves.” In a eulogy, Gus says that getting hurt in this world is inevitable, but we do get to choose whom we allow to hurt us.
As a movie, the “hurt” was worth it.