is a favorite for aviation buffs. In fact, it was the first full-length Hollywood movie filmed in Canada, all in color too!

In the opening sequence of the film, a bush pilot traveled around remote spots in Canada, discovering his business prospects were hijacked by an unexpected rival called Brian Maclean, who is played by James Cagney. Other Bush Pilots discover they were also victims of the same man. A group of them then gathered at a Chinese Restaurant, planning revenge. Maclean then arrived to meet one of the bush pilots’ love interest, played by Brenda Marshall,  who came out to greet him when he landed his plane. 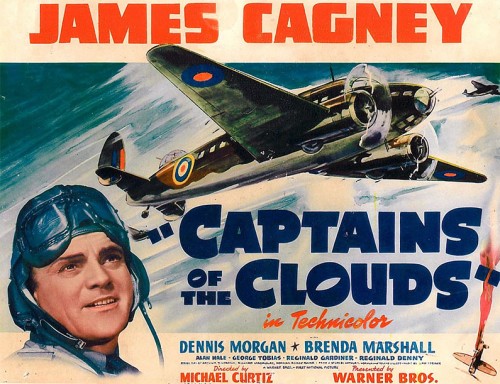 Here she saw firsthand how Maclean dealt with his business prospects, as he delivered packages, usually wheeling and dealing with the locals, interfering with the business of other bush pilots. It doesn’t take long to see Maclean swing a deal, or two, to take a passenger, who is waiting for flyer Johnny Dutton, a rival flyer, and fiancee to Brenda Marshall. Johnny Dutton was played by Dennis Morgan. During this flight, three Bush Pilots, who were flying in formation spot Maclean and try to force him to land. All through this film, movie viewers will get to see scenic locations from Northern Ontario, including vintage aircrafts. In fact, this film is a favorite for aviation buffs, including military historians.

Maclean managed to outmaneuver his rivals to fly to another location, where he landed to return to meet Brenda Marshall. They have a brief argument. In such an unlikely position, Maclean unexpectedly got whacked in the back of the head by a wayward propeller that was still moving behind him, causing him to fall unconscious into the lake. He was then rescued and brought into a nearby cabin where he was nursed back to health by Brenda Marshall. Sparks flew between them. So there was a love triangle. It didn’t take long for her fiance Johnny Dutton and Maclean to meet. They begin a feud, argue, but Maclean collapsed. Johnny Dutton then discovered the severe gash on the back of Maclean’s head. Dutton then flew to Church Town to fetch a Doctor before returning to land at midnight. Everyone lit the remote location with campfires to make the midnight landing a success. Yes, the Doctor saved Maclean in a risky operation.

Meanwhile, Johnny Dutton sat with Brenda Marshall to plan a future airline. In such a lull, Marshall demanded marriage. After Johnny Dutton saved Maclean, a rival flyer by the name of Tiny played by Alex Hale discovered Maclean’s appointment book, listing Port Wilson Mining Operation, a potential business venture.Dutton then flew the Doctor back and once again sparks fly between Maclean and Marshall.Maclean, however, read through Marshall and her supposed marriage aspirations. Johnny Dutton, Tiny, and Maclean then met, but Maclean left abruptly. Tiny then privately challenged Maclean on his relations with Marshall and informed him how Dutton risked his life by fetching a doctor to save his life. Flash forward a year. The three have completed a successful mining operation. The men divide their season’s wages.At a quiet moment, Dutton told the others about his upcoming nuptials but Maclean challenged him on this, saying such a wedding would destroy his planned airline. The men fight.

Next scene. Marshall was with a stable boy, yet another tryst! A flyer then came in. There were more scenes of Northern Ontario, where Maclean and Marshall meet, and he got her to agree to come to Ottawa. Not long later Dutton came and learned of their destination. In Ottawa, Maclean and Marshall arrived at the now Fairmont Chateau Laurier in Ottawa. At this juncture,  Dutton confronted Maclean, learned they were married. Johnny Dutton then walked out, giving away his seasons wages to a Red Cross Worker in the hotel lobby. He then walked outside and witnessed a huge parade of soldiers, passing the front area of Canadian Parliament.Movie viewers get glimpses of the famed War Memorial and Recruitment Posters that were strategically placed all over the downtown portion of the city.

Johnny Dutton then had an epiphany and walked into the Army Recruitment Office. A little while later, Maclean returned to Marshall, they argued, and Cagney then gave his season’s earning to Marshall before he left her for good.Not long later, the Bush Pilots, including Maclean, rendezvous in the same Chinese Restaurant, where they all listened to the legendary Pm Winston Churchill Radio Address. These men then pondered his words and proceeded to fly to a northern military base called Uplands. More vintage aircraft’s and B52’s can be seen. Once the Bush Pilots arrived at Uplands, an official met them, demanded they leave. The Bush Pilots then go to the Royal Canadian Recruitment Center, where they inform the proper authorities about their flying hours and other experiences relevant to flying.

The Bush Pilots then learn about the dangers of blackouts for older fliers and of the rule that no pilots under age 26 pilot a fighter jet. There were more scenes of soldiers marching in formation. According to my research a military base in Trenton Ontario subbed for Uplands, and there were scenes filmed with soldiers marching at the Canadian Exhibition Grounds in Toronto, all in 1941, a real treat for those interested in Canadian Military History. In the film, the Bush Pilots then flew to Uplands to get retraining. At this juncture, Maclean met Johnny Dutton and earned Dutton was his personal flying instructor.Eventually, everyone learned to fly in formation. The instructors then all convened and Maclean got assigned as a staff pilot for Jarvis Airbase. Maclean and Dutton again met, where Maclean learned that infamous Mister Dutton was his boss. Maclean then began to work as a flying instructor. His intuitive approach to flying was challenged. There was a scene of a simulated bomber run for a planned airman. No computers only a machine gun over a projection screen. Maclean then has one pilot under criticism come join him in a sub-plane.

They fly off, but there was an accident in their bombing run with a bomb burst, knocking them from out of the sky and into the water, where they were rescued.Maclean then faced a court-martial for the low flying accident. The court then dismissed him from the service. Maclean and Tiny then met to get drunk with other soldiers. At this point, they learned Billy Bishop, legendary Canadian War Ace from WWI, was to be in the ceremony.

The next scene Billy Bishop was at Uplands, where he gave a speech to the young fliers assembled from around the world. The war ace then gave out the wings, a rare moment in film history too. Yes, Maclean and Tiny get drunk and dive bombed the gathering that was assembled on the tarmac. Without warning, Tiny went unconscious, went into a dive, and crashed. Firetrucks put the fire out while Maclean escaped. At the crash site, everyone assumed another flyer had died. Sometime afterward, Dutton met Brenda Marshall,  and she learned that Maclean lost his pilot license. She then begged Dutton to help Maclean anyway he can. Almost immediately, all the officers were called to an important meeting, where they learned that every bomber and every available pilot must be prepared to fly to England to deliver bombers.

At Gander, the pilots convened again, got organized and briefed for their mission to the UK. Once again, Maclean and Dutton accidentally meet, and Maclean demanded to be allowed to fly the bomber. The men talk privately, and his boss assigned Maclean to fly the Bomber. Like I noted before, this movie is a favorite for aviation buffs and military historians.There were scenic locations and vintage airplanes to take in. Yes, on their way to England, they encountered a lone Luftwaffe

reconnaissance fighter jet. And Maclean saved the day. You’ll enjoy Captain’s of the Clouds. Some of the actual aircrafts used in this film can still be seen on static display and somewhat forgotten at the Guelph Airpark…far…far away from those “glory” years. In fact, there is no marker or signage anywhere near the plane revealing its former fame. This Yale, as it was called, has been hidden away for years (in-between hangars) at the small Air-park.

DianeWylie Apr 22, 2016 0
The Mayan civilization captured the attention of some folks recently with the “end-of-the-world” predictions caused…
Writing