Dolphins are hugely intelligent, social and family sick. We all know it, yet every nature documentary feels the need to underscore this fact.

The same way a Western cannot do without a shootout or Science Fiction without spaceships, a nature film is not complete without superlatives about the most majestic, popular and charismatic animal in the world. 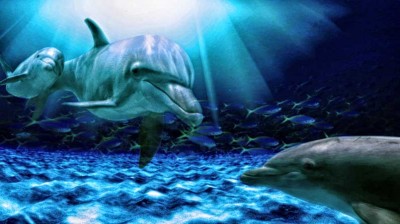 The BBC documentary Dolphins – Spy In The Pod is a cheerful one, because the dolphin never misses an opportunity to have fun. This fact immediately addresses the problem with Dolphins, for whom everything is a party, as they live by the credo that life should not be taken too seriously. That Dolphins aren’t all called Flipper and also have their reprehensible sides, is often covered with the cloak of love. Indeed, few people know that Dolphins are actually quite unethical assholes.

The American biologist Richard C. Connor already reported in the late nineties of the rape culture among Dolphin populations. He showed that male Dolphins regularly sexually harass female Dolphins. Male Dolphins, in their ‘social’ behavior, create alliances to separate a female that cannot escape during an activity that we would call gang-rape. Male Dolphins have unbridled lust, even at the most unusual moments, such as when the female is pregnant. If there are not enough females available, Dolphins incidentally, have no issue with raping other animals, including humans.

Dolphins also attach great importance to power. Every dolphin wants to be the boss of the flock. That position is not gained by making the most beautiful click noises, but through aggression, manipulation and infanticide.

Research into a flock of Dolphins on the north coast of Scotland shows that infanticide – next to fights – are not unique in the battle for the highest social position within the group. As an exercise for this infanticide Dolphins also regularly kill other baby animals, like young Porpoises and Sharks.