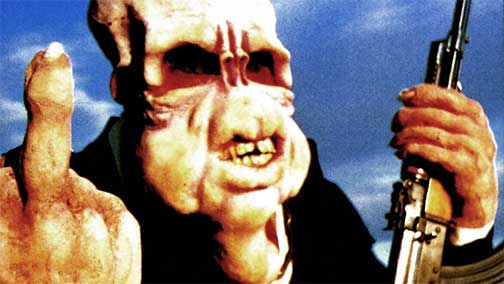 trilogy, and the King Kong remake. An unabashed gore/sci-fi comedy, Bad Taste was made over a four year period by Jackson, members of his family and friends during the evenings and on the weekends.

Shapeshifting aliens have landed on earth in their starship (which looks like an English manor house) and are harvesting humans for their intergalactic fast-food franchises. What some fresh brains? Just lop off the top of some poor Earthling’s head and scoop them out with a spoon!

Dead Alive, Jackson’s revolting third film (1992, again directed and co-written by him), is a zombie splatter comedy with even more blood and guts than its predecessor. Lionel’s mother hasn’t been feeling well and Lionel doesn’t understand why until Mom becomes a full-blown zombie thanks to the bite of a Sumatran Rat-Monkey.

As an added result, anyone then bitten by Mom becomes a zombie, and then anyone bitten by those zombies becomes one and so on and so on, literally ad nauseam

One of the final scenes has more fake blood in it than any other twenty horror films combined with Lionel literally slipping, sliding, and practically swimming in it.

Amanda M. Thrasher Jun 27, 2021 0
I Wished That Was Me Sometimes, the oddest things happen in the neatest way. I rarely think about how I write.…
Publishing