NASCAR is the largest spectator sport in America. It is a sport deeply rooted in founding families; the Frances, the Pettys, the Earnhardts, and the Allisons.

Generations of faithful fans continue to be drawn to its raw power, blistering speed, and the fearless men who drive the “missiles on wheels.” 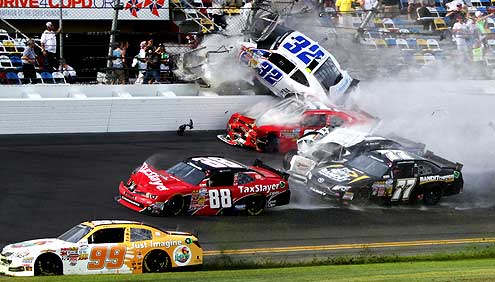 NASCAR is also one of the nation’s fastest-growing sports with an expanding fan base of both men and women. It is quickly becoming as popular with advertisers as the Super Bowl.

It’s no wonder that the sport’s premier event, the Daytona 500, is considered the “Super Bowl of Racing.”

Entrepreneur turned movie producer, Mark Sutcliffe, a friend of NASCAR legend Bobby Allison, now has the hottest ticket in Hollywood with his new movie, Racer’s Heart. A thrilling and emotionally-charged biopic based on Allison’s life that will touch your heart as you discover the incredible true account of one of the greatest drivers in the history of racing.

It’s a classic love story spanning four decades that is set amongst the turbo-charged, “pedal to the metal” world of stock car racing.

In Racer’s Heart, you are introduced to Bobby Allison and his wife, Judy. You meet their four kids (in particular their two boys), Bobby’s parents, his brothers, and his racing rivals. What follows is a remarkable personal chronicle of perseverance, determination, and accomplishment punctuated by unimaginable loss. Some may think auto racing is too dangerous but whether or not you are a fan of the sport is immaterial because you will enjoy this riveting and compelling human drama.

Bobby’s rise to the elite level of his sport is meteoric but he’s somewhat of a “lone wolf” and makes just as many enemies as friends along the way. Judy’s always there to support him, to nurture him, to mend him, and to love him. Once Bobby reaches the top, he has but one single-minded pursuit – win a Driver’s Championship. After a 15-year chase, he finally achieves his dream.

By this time, his children are all adults. He begins to realize that his dream has come at the expense of his wife and family. He may have put bread on his family’s table – but he missed too many family dinners. Bobby continues to race, but he does make an effort to be a better father. He starts by mentoring his younger son, who decides to follow in his father’s and older brother’s footsteps and race NASCAR. That’s when the first of three tragedies tests the strength and conviction of Bobby and Judy’s love for each other and their faith in God.

Racer’s Heart is filled with breathtaking victories and heartbreaking losses. It’s the story of a uniquely-gifted man who crisscrossed the country for decades racing anywhere he could “have it all” only to “lose it all” a few years later. However, at its core, Racer’s Heart is a story of acceptance, redemption, and forgiveness, where true love and true faith are unconditional and unwavering. It’s a gut-wrenchingly personal story with a universal message of hope that will leave you uplifted and inspired.

The sure-to-be Blockbuster is currently in the development stage, and I am thrilled to say I will be first in line at the theater box office when it is released. Mark and his team have written a dynamic script peppered with excitement, speed, action, and drama and he’s already begun to cast the new film.  I am happy to report that Mark is “blown away with my passion for the project.” He plans to involve me in the film, both in front of the camera as an actress, and behind the camera in the production.

Another reason for my excitement is the fact that I, too, once belonged to the NASCAR family when we owned a car, sponsored by Polaroid. I was fortunate enough to have “backstage” access to this exciting sport, and I thoroughly enjoyed meeting and listening to the drivers and crew inside the pits.  When someone tells you “there’s nothing like being in the pits,” – they’re right. The speed and excitement of the racing from that vantage point is so intense it vibrates through you.

I just Interviewed Mark Sutcliffe on his new movie, Racer’s Heart; I wanted to know how he planned on sharing such a personal story with the audience considering his close friendship with Bobby Allison.

Mark said, “It was a hard story to conquer and an even harder script to write, but I knew this story had to be told. The world needs to know what this family went through because with all the fame, came so much pain. It’s a sensitive story of human compassion told through the eyes and ears of those who have lived it where we discover the real truths behind the tears and smiles of a famed sports celebrity.”

Mark attended College and earned a degree in Transportation/Trucking, he said, “I did well, but I knew I could not work for someone else, I needed to release a creative side that was always haunting me in the back of my mind.  I owned several successful businesses, but they did not fulfill my desires.  One day, while golfing,  I met the guys who designed the game Trivial Pursuit (It is a great game). I thought these guys are no different than me, why can’t I do something like this?

Well, I created a few, and after a few years, I had designed and created one of the most popular board games in the world, The CSI Board Game. I went on to create other games and while looking for a spokesperson for my NASCAR DVD Board game, I happened to meet Bobby Allison

. We talked for 15 minutes, and I knew that he was a person that came into my life for a reason…

Getting to know Bobby Allison, his life, his passions, dreams, and tragedies, I concluded that his story needed to be told. About a great American, a man that was at the top, and at the bottom, who came back from it all, a better person, and the best way was a motion picture. I started assembling my team, and today, we are making this production a reality.”

He continued, “I grew up in Suburb near Toronto with a younger brother Tim. Dad had an automotive shop (funny, cause I could not tell you how to open the hood of most cars), and my mom was and still is a very creative person. She has mastered almost every art/craft there has been through the years, and she has taught many. Her latest endeavor is quilting, and she now has this colossal quilting machine in her basement.

I excelled in sports, hockey, golf, and grew up in a strict, yet loving family. One of my greatest inspirations and one of my life mentors was my grandmother, Margaret. She was a rock, a person I could talk to, trust, and gave love unconditionally. I really miss her.”

What makes a good movie to you?  “When I come out of the theater, I want to say, Wow…I want to be a better person / better father / better son / better friend / better Christian after that movie. I want to get a message, the actors have to be real, and it needs to move me in a big way.”

I was surprised at his life and asked him, “When did you become interested in film making?”

“After I met Bobby Allison and got to know the man, his wife Judy (she’s so cute, smart and funny), their family, his life and what they went through. I told myself, this story needs to be told. It needs to get out there to inspire people of all ages.”

I had to know what his favorite movie was of all time, and he said, “Schindler’s List

So tell me, I asked, what makes you so happy?  He told me his daughter, Natalie, in College in Canada and his career. “I am passionate about what I am doing, who I am doing it for (honoring) and who I am doing it with (my great team).”

Last I asked who most inspired you.  He answered, “next to my father, Bobby Allison, is the greatest man I’ve met… ever. Period.”

I still watch NASCAR until this day and look back and remember when I heard the noise, the screams, and watched from the pit.