HOT on the heels of the re-make of ’90s hit 90210, the Fox Network is bringing the UK comedy Absolutely Fabulous 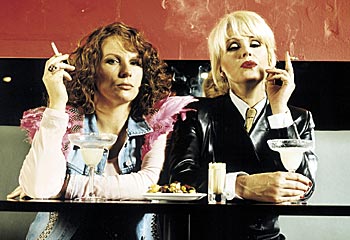 But the question is will this version of the show take, after the failed attempt to translate Aussie hit show Kath And Kim / Supplied.

Absolutely Fabulous, also known as Ab Fab, is a BBC television sitcom created by Jennifer Saunders, based on an original idea by her and Dawn French, and written by Saunders, who plays the leading character.

It also stars Joanna Lumley and Julia Sawalha, along with June Whitfield and Jane Horrocks. The series features Saunders as Edina Monsoon, a heavy-drinking, drug-abusing PR agent who spends her time chasing bizarre fads in a desperate attempt to stay young and “hip.”

Despite being a middle-aged, twice-divorced career woman, Edina is reliant upon the support of her daughter, Saffron, a secondary school pupil (and later university student) whose constant care of her mother has left her a bitter cynic.
Source: Wikipedia