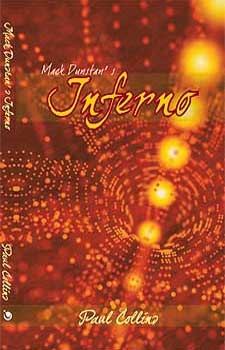 In this book, Mack Dunstan’s Inferno, Paul Collins takes a giant step forward, bravely writing a novel about a Dantesque journey into life after death – the consequences versus rewards of how we will spend our eternal days based on our actions in this life.

No, this is not a religious drama: quite the opposite. Even though Dante’s (and now Paul Collins’) Inferno is based on the concept of sinners going to purgatory and then descending to the various rings of hell depending on the seriousness of their earthly life, here it is a tool to expose the life of one who has passed on and the people he meets as he journeys into the underworld.

Paul Collins is intelligent and informed and his comfort with ancient history is very much in the foreground of this book. But let’s get there first. A man, Mack Dunstan is on his death bed, dying of Alzheimer’s Disease among other things and as he dies he goes through the phases of expurgation as he gradually leaves his corporal being and becomes a spirit that enters the netherland of the afterlife (or continuation of the journey of life as some would prefer).

He departs the sterile hospital bed and the doctors and nurses and evaporates into the light – and beyond. Mack Dunstan is leaving life as a movie star who will always be remembered for major roles in the cinema (The Ten Commandments, Planet of the Apes, Ben-Hur, Soylent Green, etc) but has not been a good man: his activities have included heading the NRA (National Rifle Association) and his pro-gun policies were responsible for many needless deaths – as he discovers when Virgil (70 BC – 19 BC), the classical Roman poet, acts as his guide.

As he descends into the sulfuric flames and burning lakes he encounters the victims of his ‘hobby’ (a fact that suggests that these victims were primarily black or latino and poor ). But Collins also takes this opportunity to insert humor into the novel and this comes through encountering some incongruous fellow travelers in Hades – people including Charles Manson, Jeffrey Dahmer, Ted Bundy, Jack the Ripper, Hugh Heffner, Larry Flynt, Jimmy Swaggert, Pat Robertson, Billy Graham, Marlena Dietrich, Barbra Streisand and on and on.

It doesn’t take much detective work to unveil the true ‘Mack Dunstan’ as at least a takeoff on Charlton Heston. Some readers may have a problem with that – and with other co-habitants on the various circles of the Inferno. But this is freedom of speech at its best.

As in any parody it is the truths that surface that makes a book of this nature powerful, Paul Collins has convictions and he has a legion of gun control advocates covering his back.

This is a sample of where literature should be taking us right now – now that the media is more focused on entertainment topics than matters that matter.

Dunstan felt he was dreaming. He saw his surroundings blurred. A familiar room manifested and he stood in a fog. Where am I now? His eyes attempted to scan his location, but he could see nothing in every direction. The fog dissipated and a figure materialized from the oblivion. It was tall and dressed in white from head to toe. The owlish face bespoke the sense of kindness and wisdom that this entity would impart. It possessed a cherry red face. Its grey hair trailed down to his waste.

A gentle wind pushed his white robe, as a sail would flap in the wind. A warm energy came from this being, almost a regenerative and warm feeling too.

Dunstan realized he felt no pain, radiating a warm face, where he beamed a smile. He looked around, but his vision was still blurred. Although he was in a dreamlike state, Dunstan still felt no pain. He tried to ignore the blurring of the vision.

As time went on, the shock of death and the numbness that followed induced Dunstan to accept the fact that his mind and sense could not be one hundred percent. He felt a flash go off, obvious a nice vision. Several forms stood before him. The specters, all gray and with no features, were all dressed in the color black. Some, however, shaped shifted into a pack of wolves with ferocious faces and long fangs.

The American’s face went tight. An explanation has to be in order. “What’s going on?” His voice again sounded slurred, or drunken. The blurred, grey outline motioned a gesture.

“This is a dream! This has to be a dream!” he hesitated. This doesn’t happen to me. This is not the usual!
“If this is a dream,” it replied. “Then just wake up.”

Dunstan closed his eyes and clenched his teeth. His eyes blurred again.
The human forms scattered about him. Some were in suspended animation, while others went about their business. When the mist disappeared, his vision again went hazy.

“Perhaps I have lost my sanity?” he told the nothingness. “I am going absolutely mad! Do you people like that!” he beckoned to the oblivion.

He felt gripped by a great sense of consternation. Mack looked around searching for anyone, or anything that could release him from this terrible fate.

This has to be a dream! Dunstan gazed around at the swirling fog. Every bone and muscle in his body ached. A particle beam of light shone before him. “Do you seek help?” it asked. “I will guide you if need be.”

The fog diminished and Dunstan stepped forward. On the edge, his breath became forced, as he shook. The old actor tried to grasp the hands of the ghost, but his hands went right through it. These doctors and their medication.

A mist gathered around him and he groaned. Things went blurring again. He wanted to speak to Lydia, but she faded into the oblivion, whence she had come. He looked at the corpselike form, which had shuffled its feet. What’s going on here? Dunstan blinked sporadically.

Suddenly, icy fingers grabbed him, causing him to recoil. He cried out and staggered with it. He saw she had been crying. Her eyes had become swollen lines etched across her old face, as her hair went white. Lydia’s grief had not been kind to her…

Near him a grave and tomb stone manifested. He saw his name and dates etched on it. A wave of apprehension swept over him. Oh my God! “This can’t be true!” He looked at the sea of flowers that decorated the scene.

Mack threw his hands akimbo and stared unblinkingly at the scene, not believing the reality dispensed to him. The form descended down into the grave, covered by blackness. Meanwhile, he entered the casket and stared at the corpse. Its cold face frozen in a tight mask like state.

Who knew how long it had been there, or maybe it had become part of the grand illusion of the other side. Suddenly he slipped out of the coffin, screaming. This is complete utter madness!

A great fog enveloped him, did not let go, and carried him to the surface, where it freed him. The spirit saw green foliage, making him feel like a kid from Michigan Woods again.

Every breath he took, made him feel at ease and alive again. In time, his grave clothes were no more. He had a short sleeved shirt, white slacks, and sandals. 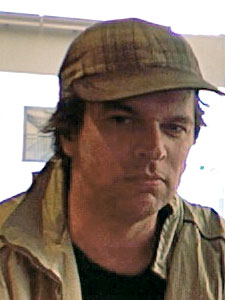 Paul Collins was born in Toronto, Ontario Canada. Collins is a freelance commercial director. In 2002, he directed a documentary about youth violence called Just Talk. Its world premiere was at the Final Cut Short Film Screenings DJ & VJ Sets in the city of Brighton in the fall of 2003. Collins has written Prescience Rendezvous (out of print), King without an Empire, and  Mystery of Everyman’s Way. Mack Dunstan’s Inferno is his next paperback. He has also written several short stories for Angie’s DIARY.

When I took a night time creative writing course at Ryerson University, my instructor was Barbara Gowdy, a noted Canadian author. I remember Ms. Gowdy saying: “For the first assignment, describe a room. One page.” I did just that and found my classmates giving me encouragement. “For the second assignment,” said Ms. Gowdy on another day, “I want you to describe a situation.”

True to form, I wrote about my sister who rebelled against the folks, running away to England on a moments notice. It must have been a shock for the Collins Family in England. That story is now called Sister Act. Yes, I did go on to learn the screenplay format but it was just the simple act of scribbling that I pride myself upon. From 2000 to 2001, I was part of an award winning radio show called the Enterprise Toronto Radio Show. I was sent to cover a news conference at the base of the CN Tower. Right there, I saw Sir Richard Brandson dressed up as a hockey goalie uniform and attractive young woman were shooting pucks into the net.

I scribbled that idea down and called it King without an Empire. I went on to write that paper book. I spent almost a year and a half writing that book. It came out in January 2005. Somewhere, around that time, I went to a bar to celebrate. I walked into the bar with a friend, ordered a drink, pulled out the money, and my friend told the bartender: “His money is no good.”
“Why?” asked the bartender. “Is it fake?!”
“No,” responded my friend, “Paul just got published! Drinks are on me!” The bartender then took us to the back of the bar, where there was another author.

This author who was an accountant by trade, listened to us, and then told me: “Your publisher, Publish America, is a scam. If you want a legitimate publisher, go to www.ralan.com . I searched out the site and when I had Mystery of Everyman’s Way complete, I went through the whole site. I found eTreasures Publishing. The then publisher, Vicky Kennedy, then mentored me on how to write a proper paperback. She told me after every ten pages, end each chapter on a mystery, like a knock, or a phone call. Why? So readers will find the book interesting.

I did just that, got Mystery of Everyman’s Way published . Somewhere, I got Mack Dunstan’s Inferno published. I am just a silly day-dreamer that scribbled my way into online publishing.