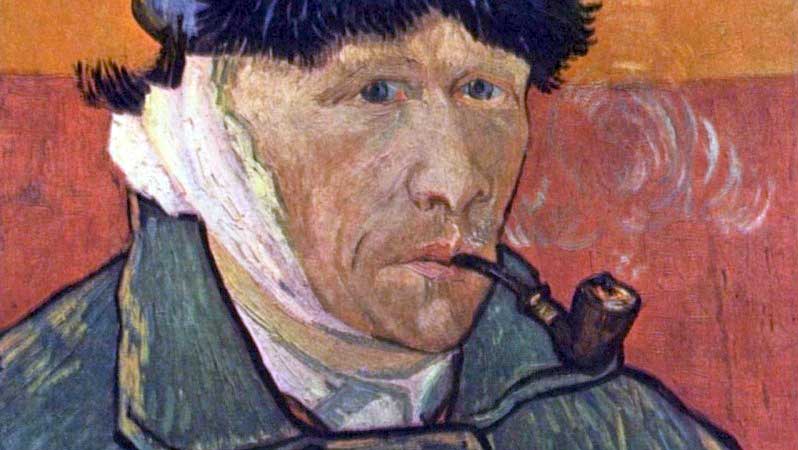 Before Vincent van Gogh cut off his right ear lobe and presented the bloody thing to a prostitute, self-mutilation never before characterized his self-destructive behavior.

In his escalating madness, van Gogh considered his act a trivial event and hoped Gauguin would not tell his benefactor brother, Theo, about it. Of course, Gauguin did tell Theo, and Theo rushed to Vincent.

When you look at this self-portrait, you see simply a man smoking a pipe with artistic devices intended to draw your eye to his facial features, so that you hardly notice the bandage on the left.

Also prominent is the pipe and its smoke that makes an arc around his head and leads the eye out of the picture above the bandage.

Where is the emotion so clearly evident in all the other van Gogh self-portraits? This self-portrait seems more like a caricature of a man, rather than the artist whose self-portraits reveal him through eight stages of his life.

For example, in his last self-portrait, painted in late 1889-1890 in Saint Remy or Auvers, clearly, you see a madman willingly making efforts to control his madness.

In this uncharacteristically unemotional self-portrait, Vincent paints eyes that lack emotion so completely that they appear vacant. Unlike the eyes in all his other self-portraits, these eyes lack the powerful van Gogh gaze.

These eyes don’t seem to want to engage the viewer at all like he didn’t want anyone to be able to read anything in them. Does he simply want us to know what a painter looks like when he slices off his ear lobe in a fit of passionate pique?

How significant are the bright, cheerful oranges that predominate this portrait, when compared to the blues predominating in all his other self-portraits? In this self-portrait, only the hat has a bit of blue with much more of the hat colored in black and dark lavender.

Madness holds many mysteries. When Vincent felt his madness taking over, one observer said he would try to cry, but the tears would not come.