I find fascinating interactions, friendships, and purposeful collaborations between two artists. You probably are familiar with the competitive friendship between Matisse and Picasso. Are you also, like me, curious about the nine-week Studio of the South creative collaboration between Gauguin and van Gogh?

Paul Gauguin (1848-1903) and Vincent van Gogh (1853-1890) were only five years apart in age, yet van Gogh admired Gauguin as a hero and Gauguin saw himself as mentor, to the point of arrogantly attempting to postdate van Gogh’s sunflower paintings to after his arrival at The Yellow House in Arles. To get Gauguin to join him in Arles, van Gogh persisted with Theo, his brother, asking him to give the ill and impoverished Gauguin a monthly allowance, too, stating that he saw Gauguin as the Abbott of the artists’ colony he hoped to establish. Van Gogh asked his friend, fellow artist Emile Bernard to convince Gauguin to come, hoping that Bernard would join them, as well. After much delay on Gauguin’s part, he finally agreed to go to stay with van Gogh at his Studio of the South. 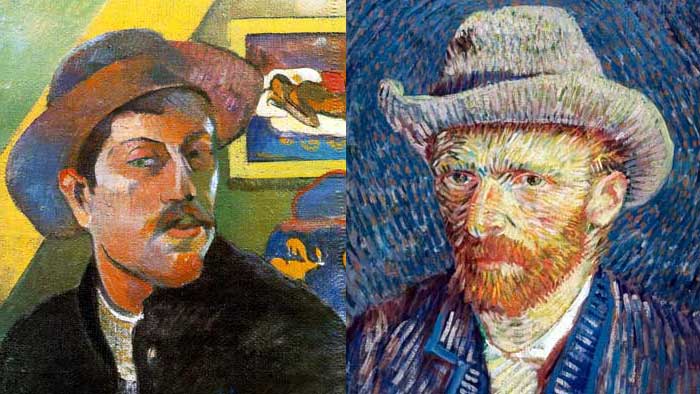 Both had a high interest in the people they painted. Both were troubled painters, living out lives of tortured souls beset by health problems, financial worries and painted to exhaustion in bursts of activity. The Brooder and the Best had difficulties living together. Gauguin called it an incompatibility of temper. Van Gogh described to Theo that his conversations with Gauguin seemed like our nerves were so strained there wasn’t a spark of vital warmth left in us. Gauguin said, during the latter days of my stay, Vincent would become excessively rough and noisy, and then silent.

Van Gogh irritated Gauguin with his sloppiness and lack of attention to finances. Gauguin placed their resources on an organized budget. You can see the differences van Gogh saw in his paintings of the chairs of each, one Spartan and sturdy and the other fancy holding a lit candle. You can see their irritations with each other in their portraits of one another. Some say the cynical, sarcastic Gauguin helped cause the terminal mental deterioration of van Gogh. Gauguin, a complete egotist, who thought little of the pain he cause others, seemed to be unskilled in kindness.

While Gauguin enjoyed feminine companionship most of his life, wife, mistresses and liaisons, van Gogh rarely enjoyed more than anonymous brothel affection. Gauguin is said to have had a savage persona, which he flaunted with eccentric actions, outlandish clothing, his pet monkey and 13-year-old mistress from Ceylon. Not surprisingly, people found van Gogh’s erratic personality and melancholy difficult. Aware, van Gogh expressed thoughts on madness and mental troubles in his correspondence with Theo.

The two avant-garde artists shared total commitment to their art while exhibiting vastly different temperaments and painting styles. It was after van Gogh tossed a glass of absinthe at Gauguin in a cafe and rushed at him at night with a razor that Gauguin wrote to Theo that he was leaving. Van Gogh’s dream of hosting an artist colony seemed to be fizzling with Gauguin’s threat of departure.

After the not carried out razor attack, Gauguin went to sleep at a hotel and van Gogh went back to The Yellow House and cut off part of his ear. Near midnight, he delivered his severed lobe to Rachel at the brothel they frequented. Gauguin was accused by the police of killing van Gogh. On further investigation with Gauguin of the body in The Yellow house, the police discovered van Gogh was not yet dead.

Even though both enjoyed the generosity of family, life burdened them. Both despaired and sought out the ultimate escape through suicide. Van Gogh succeeded in 1890 while Gauguin’s suicide attempt in 1897 failed and he painted on for five more years. The most compelling difference in the lives of the two comes from Gauguin finding a pocket of paradise in Tahiti while van Gogh’s dream surrounding his Yellow House of Light never materialized to bring him the companionship and happiness he so desperately sought.

Interestingly, both allowed their paintings to be influenced by the other’s style while they were together in Arles. Gauguin experimented with thicker paint applied with a palette knife. VanGogh experimented with abstracts and painting out of imagination. Both, not surprisingly, went back to their signature styles afterward, vanGogh quick and spontaneous en plein air and Gauguin studied and thoughtful from sketches often painted in the studio.

See the differences in painting styles of these two artists by looking at their self-portraits and their portraits of each other. Compare Gauguin’s Vision of the Sermon with van Gogh’s Still Life with Bible and Zola’s Joie de vivre, and also the sunflowers both painted. Look at how each painted Madame Ginoux. Van Gogh has her brooding alone while Gauguin has her aware and curious amid her customers in the Cafe.

EXHIBITION RESOURCE: Highlights of the Exhibition Van Gogh and Gauguin The Studio of the South, The Art Institute of Chicago ISBN 0-86559-195-4, about the Exhibit in Regenstein Hall from September 22, 2001 to January 13, 2002.

Just Write For Me…