Chess Champion Tragedies:
Among the general public, there seems to be a common conception of chessplayers, especially the very best, as self-absorbed, anti-social weirdoes many of whom have but a tenuous grip on reality—if that.

However, this view does not, in actuality, square with the record. Most of the strongest international tournament chess players have been socially and psychologically quite well-adjusted, and incidents of insanity are extremely rare.

Perhaps the misconception stems from the few, but celebrated, cases of the former. And Bobby Fischer was far from the first. 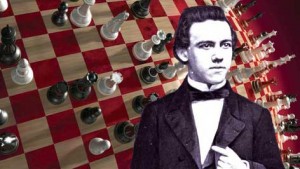 merican Paul Morphy, dubbed “The Pride and Sorrow of Chess,” was perhaps the first. A prodigy never formally even taught the moves of the pieces, he reached Master strength in his teens and by 20 was by far the strongest player in America.

A subsequent whirlwind tour of Europe (then the world’s chess capital) demonstrated that he was also by far the world’s strongest player, though an official title of World Champion was not then yet in use.

He was quiet, withdrawn, but eminently gentlemanly and polite. His background was what we today would call upper-class, and his New Orleans rearing, just before the American Civil War, was one of privilege.

He had earned a law degree before the age of 20 but pursued his meteoric amateur career in chess for two years following since he had not been old enough to practice law professionally in Louisiana at the time he took his degree. All chess players he met spoke of him as singularly genteel and affable, though rather aloof.

But after winning the unofficial title of World Champion, he returned home, gave up chess, and pooh-poohed it as a profession unbefitting a gentleman. However, the outbreak of the Civil War cannot be blamed for his failure to successfully practice law.

Several attempts to establish a practice came to nothing, and the remainder of his life was spent in idleness and increasingly odd behavior patterns, including displaying a paranoiac mania regarding a cousin of his attempting to prevent him from practicing law.

The deep but ill-founded belief that someone unknown to him was trying to poison his food and set all his clothing on fire; long walks down a busy promenade every day, at precisely the same time, meanwhile acknowledging absolutely no one; and arranging women’s shoes in a circular pattern in his sitting room.

Renowned psychoanalyst Ernest Jones, a disciple of Sigmund Freud, later attempted to analyze Morphy’s case in the classic paper “The Problem of Paul Morphy.” Bobby Fischer considered Paul Morphy the greatest of all players—and his own actions 100 years later sadly mirrored many of Morphy’s.

The first official World Champion, the Austrian Wilhelm Steinitz, followed closely on Morphy’s heels. Ironically, he was born a year before the American champion, but they never met in tournament play. Steinitz came to the game rather late in life, and Morphy had already retired.

Steinitz ruled the chess world for almost 28 years and brought the game forward in many respects with his innovative theories regarding positional play. His eventual loss of the world title hit him hard, and within four years this fiercely stubborn and dogmatic man lost grip.

He suffered a series of mental breakdowns and spent his final days impoverished and confined to state mental hospitals and asylums. He developed the notion that he could play blindfolded chess with God and beat Him. When pressed on the matter, he responded memorably, “That’s nothing: I give Him pawn and move odds!”

The relatively recent case of World Champion Bobby Fischer was so highly publicized that little needs to be said. But the parallels with Morphy are so striking that note should be taken: he won the world title and then virtually never played again; paranoid fancies, first concerning Soviet players conspiring against him and later about, among other things, the Jews, took a stranglehold on his life; he never worked after forfeiting his title and proceeded to live a life of idleness and inertia.

Fischer’s death came at age 64, the number of squares on a chessboard. Pure coincidence?

The examples of two near-world champions are also relevant here. The first is Polish Grandmaster Akiba Rubinstein, the world’s most successful tournament player in the years 1911-3. A match was arranged for him to play for the world title, but the outbreak of World War I in 1914 scuttled the plans.

Poverty and privation during the war years took a terrible toll on Rubinstein, and he was not the same player, nor the same man, after the long conflict. His tournament career continued, but increasing schizophrenic tendencies and delusions marred his play and results.

The specific psychiatric designation of his primary condition seems to be anthropophobia, the fear of people and society. He would not look directly at his opponent and often would vacate the main tournament playing area until it was his turn to move.

Further, he was hampered by the delusion that flies buzzed around his head during tournament play. The sad decline of his playing strength in the years following the Great War is marked by his reputation as the strongest player in the history of the game to be vulnerable to the occasional elementary and outrageous game-losing blunder.

Mexico produced its first and only top ten Grandmaster in the early and mid-1920s. Carlos Torre Repetto climbed the international ladder with astonishing alacrity and by 1926, at the tender age of 21, was already considered a potential future World Champion.

In 1925 he had vanquished long-time World Champion Emanuel Lasker in a classic encounter featuring a brilliant Queen sacrifice in a Moscow tournament. He developed and pioneered a now-popular opening variation, the so-called Torre Attack. There seemed no limit to his promise.

But fate had a different agenda. Before the close of 1927, the young man evinced symptoms of severe mental illness. For a period of many weeks, he attempted to subsist on a diet of nothing but pineapple sundaes.

He later took to completely disrobing on both public streets and buses, which resulted in his institutionalization. He was never a factor in the chess world again, although he lived until 1978.
The price of chess genius is sometimes high indeed.