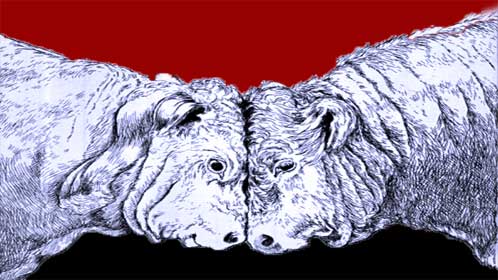 “Stalemate” is probably the most commonly employed and recognizable term in general usage derived from the game of chess.  We hear that, for example, contract negotiations or a military battle has reached a stalemate.

The term denotes to almost everyone an impasse, a deadlock, in which further agreement or progress is currently impossible and the competing sides, therefore, stand equal.  In a game, it would constitute a tie or draw

And so it is in chess.  A stalemate refers to a position in which one player cannot make a legal move, although his or her King is not under direct attack (that would be checkmate, a loss), and the game is declared a draw.

But perhaps the concept of stalemate is not that clear, that unambiguous.  In some other board games, checkers (draughts), for instance, a stalemate is a loss for the player that cannot move.  The thinking is that the player has been seized in a stranglehold, necessitating a form of submission.

Similarly, in contract negotiations, for example, an impasse normally referred to as a stalemate is rarely equally satisfactory for either side, and often occurs because the more powerful faction simply refuses reasonable compromises, and the resultant negotiations deadlock may in fact clearly favor the side doing the stonewalling.

In fact, in chess itself, until stalemate was officially recognized as a draw by international chess organization consensus in the 19th century, the board position was variously considered either a loss for the stalemated side or a situation illegal to put a player into, depending on the regional rules and conventions.

The upshot seems to be that yes, certainly, in today’s chess world a stalemate is a draw—yet the metaphoric extension and application of this chess-specific term is, in reality, best viewed as far from precise and equally satisfactory to both sides of the contest.

Wagons in a City

Jack Eason Nov 26, 2011 3
The Chicken Or The Egg? Most people when buying a book have different ways of deciding what they wish to read.…
Book Review