Spot the Writer in the Crowd

How good are you at guessing what people do merely by looking at them? For instance, could you spot the writer in the queue of people at your local supermarket checkout, or buying something in your neighbourhood convenience store?

How about on the crowded commuter train or bus you use each day? Have you ever thought about what the people you see walking along the street outside your door every day may do for a living?

For the vast majority of the population of any country you care to name, while you may see a highly recognisable and successful writer, signing copies of their latest work in a bookshop near you, most would simply not realise that you probably had a writer of your very own living in your midst. 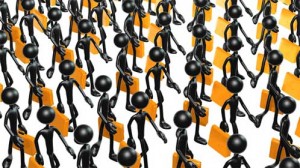 If you were asked to describe what you believe a writer looks like, what would you say? In reality, anyone encountering me on the street would probably do their level best to avoid contact.

The person they would see before them is a dishevelled, bearded, balding old man with a limp, in his mid-sixties, who prefers to wear old jeans and T-shirts – not that I go out much these days. People make completely incorrect assumptions about others. In my case I would be automatically pigeonholed as a sad old loser, judging by the way I look.

Boy would you ever be wrong! Mostly all I want is to be left alone to do what I love – writing. Physical appearance is immaterial to my way of thinking. What’s inside an individual is what counts with me.

I hardly fit the stereotype of what the English public perceives a writer should look like, and that suits me just fine. It means I can get on with that next novel, apart from the odd interruption to my daily work schedule, like the postman, paperboy, or my grocery delivery once a week. Out of the nine thousand plus people living alongside me in the small English market town in which I live, less than ten of them know that I write. It always makes me laugh when people find out that about me. The look on their faces is always priceless – yet another totally misguided assumption of theirs, blown to hell.

The really weird thing is that in the world of ebooks I’m known to thousands across the planet, mostly in the US. If I was to walk past them would they realise who I was – probably not.

Don’t get me wrong, I’m not complaining – far from it. Most of us crave anonymity, and I’m no exception. Just so long as I’m left alone to get on with it, I’ll keep on cranking out a novel, roughly one a year, or every two years depending on the writing flow.

Most writers I know are reclusive by nature. We have to be. How else would we be able to write that book you’re hopefully enjoying at the moment? Unlike most other people, as writers, if we’re serious about what we do, we work an unpaid seven day week. We only get royalties when you buy a copy of one of our books.

So, the next time you’re in town, or taking a walk in your own neighbourhood, don’t just dismiss people out of hand by the way they look. Instead, see if you can spot your local writer.

Adelle Laudan Dec 5, 2010 12
Walk The Sweeter Side It is no secret the publishing industry is going through some pretty major changes. With…
Publishing