Movie Reflects Life in 2012 – Sean Penn starred in a film called “The Assassination of Richard Nixon,” a film by Niels Mueller along with Don Cheadle, Jack Thompson, and Naomi Watts.

Sean portrayed a man looking for the American dream but nothing seemed to move in the right direction. His role, based on a true story about a man named Sam Bicke;  a man as common as John Smith – yet Sam was not comfortable with life, Congress, Government, and his own family.  He blamed the government, detested big cars, the cost of gas, and he drove an older car – made little money, despised his job – after job – after job, and never felt good enough in front of a boss. 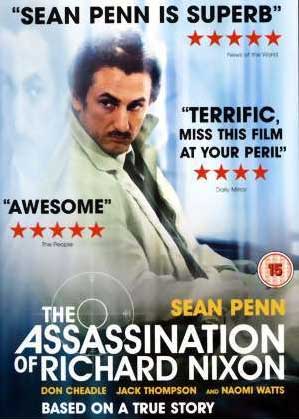 Sean played his part with celebrated success, feeling at home and comfortable as he took over the lifestyle of a dark, disturbed man and slipped into his mind.  Failure showed on Sean’s face, it was bleak, rejected, a secluded person, lonesome and living alone while his family remained in his home he could no longer afford.  One job, then another, finally he shared his moment of success with his family, trying to win them back.  It never worked.  How often today are families faced with foreclosures, the homeless continues to grow in large and small cities alike.  How many feed their families less, hunt days for a job, and hope the next one will be better.  Sean’s part was forty years ago, and it still rings home.

Sean was unable to keep a job that satisfied him – similar to those unemployed today. He never held onto a job – he simply felt he never fit the part.  He never listened to advise concerning his performance, it sounded more like ridicule.  Sam had an old friend who he worked for who continued to drum some common sense into his mind.  He knew he was slipping away.  If you watched this DVD today you would watch Sean, the character who slipped away from daily life, searching, until there was no other place to search. Sean took on what I would compare to the lost of 2012 – the economy collapse since 2008.  Sean played a frustrated and disillusioned character.

To jump ahead to today and the bleakness of day on faces of strangers, you would remember this film.  The colorless day, the uninteresting job, the cheap, inexpensive car, and the frustration and rejection he felt day to day.

Sean, a young man in this film grew older, weaker, and played a familiar role in today’s society.  The tone of his voice and the characters mental frame of mind were extremely important. His outlook on life fell to a low point when he tried to reunite his family but it never panned out.

One night he waited for his wife the entire day – on the front porch of his home where he did not stay, and when he spotted his wife and children arriving home in a fancy car, his own children holding another man’s hand, he rushed to the car to hide from the scene. He felt like a stranger in a familiar world.

He blamed the government as he listened to one press conference after another.  One conference spoke about high gas prices and lines continued to grow at the pump.  Another familiar up and down problem, gas prices – no jobs – foreclosures – families broken during the 11-year war.  The difference during the Nixon years, those rich became richer, and the ultra rich were few, unlike today’s world.  It was the time when the men would be returning from Viet Nam, they had jobs waiting for them, although how legal is another story when their work consisted of making a hammer at the cost of a few hundred dollars each, and a toilet seat, a few thousand dollars.  But, this is for another story, although government planned something ahead of time, how right or wrong, the rich got richer.

Sean played the character of Sam Bicke, a man who simply could not keep up with a normal life or ever be anyone special.  He blamed it all on the Congress for the way he was treated by friends and family. He tried to explain to those around him who never took time to listen, which drove him deeper and deeper into a hostile environment where no one understood.

He felt the world would be better without the government.  The government needed to change and the only way was to kill the government, so he planned a way to do it.  He stopped at his familie’s home, and to their fortunate timing, he found only the family dog.  He spread out on the bed which was once his bed and waited, no one showed.  He went downstairs, played with the dog, then killed the dog in the basement.

He left the city and drove to the (at the time) Washington National Airport, and he waited until he believed the time was right.  He charged down the path to the entrance to the plane, and began killing people.  He wanted to talk to the pilots, and he told them to close the door.  The one stewardess escapes, and the police arrive, he was failing again.  His plan was to blow up Congress, getting rid of Government.  Instead, he kills one of the pilots, and through a small glass plate, the police see him, shoot him, and as he dies he keeps thinking, they will remember me now.

What do we get from this movie?  How important life, living, and sharing is to the normal family.  How love, is important, and equal pay, jobs, friendship, and belief in ones self.  But, most of all, to take it upon yourself to gather together and fight an issue, not alone, it never works.  Fight until you are heard; change takes time, and it switches back and forth, from the good to the bad.  Everyday is different, every person is different, once we know we can survive with a little less, or a little more and still, be appreciated for who we are, the better off the world will be.  We are all people, and we want peace, love, and understanding –  to be known as a good person.  We want to enjoy a family – as it was before all the problems robbed the past.

Fran Lewis Mar 14, 2011 0
Open Season Drug operation gone sour and a partner killed in the crossfire. One detective was plagued with…
Featured