It’s funny how during your lifetime you are positively affected by a moment, an individual, a place, or an event. In my case, it is a combination of all these things aboard a wonderful old passenger ship.

Back in 1970, I had not long since become a civilian again after doing military service in South East Asia. I was in my early twenties and the world was my oyster. And so I decided to cross the world by sea from south to north aboard an old liner, RHMS Ellenis, the flagship of the Greek-owned Chandris Line. 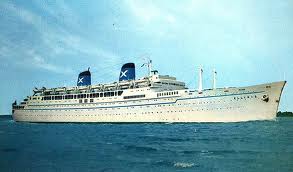 Ellenis started her life in 1931 when her keel was laid in the Fore River shipyard of the Bethlehem Shipbuilding Corporation in the United States.

She was launched on the 12 of July 1932 and christened SS Lurline, taking her place in the ranks of ships operating under the Matson Navigation Companies house flag on her maiden voyage on the 12 of January 1933.

Under her last name RHMS Ellenis, she was finally scrapped in Taiwan in 1987.

She was 632 feet in length, with a beam of 79 feet. She weighed in at 18,163tons and was efficiently run by a crew of 359. Her maximum speed was 22 knots. Originally she had accommodation for 715 passengers, divided up into 475 first class cabins and 240 for tourist class.

Lurline, or Ellenis as I knew her, was built for the Hawaii to Australasia run from the west coast of the United States. Her sister ships were the SS Malolo, SS Mariposa and SS Monteray. As the USAT Lurline, she served as a troopship during World War II.

She was half-way from Honolulu to San Francisco on 7 December 1941, when the Japanese bombed Pearl Harbour. She made her destination safely travelling at maximum speed, and soon returned to Hawaii with her Matson Line sister ships Mariposa and Monterey in a convoy laden with troops and supplies.

She was bought in 1963 by Chandris Lines to replace the SS Brittany, wrecked by fire. She sailed under her new name Ellenis from California to North East England for repairs in the dockyards of North Shields and was refitted with increased accommodation for 1,668 passengers, this time in one class.

Ellenis fast became one of the most important luxury cruise ships on the Australian and New Zealand services. She operated successfully in Oceania until 1980.

In April 1974 while cruising to Japan, she developed major problems in one engine. Fortunately, a surplus engine from her sister ship Homeric (formerly the Mariposa) which was being broken up in Taiwan at the time was available.

When I knew her, Ellenis was in the autumn of her seagoing life. In 1970 she took me north via the Panama Canal and on to New York, before negotiating the Atlantic and the English Channel, eventually docking at Southampton.

The following year on the journey back south to New Zealand, an hour after leaving Southampton, she temporarily ran aground on the western side of the Isle of White. When we woke up the next morning we were in the Bay of Biscay heading south to Las Palmas.

Unfortunately Las Palmas was closed as it was a Sunday.

The run down Africa’s west coast to Capetown largely went without a hitch. Back then South Africa was in the iron grip of apartheid. It was while climbing up the slopes of Table Mountain that I had a close encounter of the venomous snake kind.

My companions mentioned the incident to our taxi driver when he was delivering us back to the docks. I remember his face turning a funny colour when he asked what it looked like.

Apparently I had trodden on the second most venomous snake in all of Africa. Thank goodness for the early hour of the day, the lack of warmth making the snake sluggish, stout leather boots and sheer ignorance. I had actually picked it up, after standing on it, to look at it. A few minutes earlier I had picked up a Scarab-like beetle.

The journey across the Southern Indian Ocean to Perth was awe-inspiring. Ellenis climbed mountainous waves taller than her superstructure in a howling gale. When she was temporarily perched on top of one of the massive walls of water, the old lady shook as her propellers sliced through air instead of water.

The passage to Melbourne and Sydney was largely uneventful. But the crossing of the Tasman Sea back to New Zealand was definitely rough, simply because of its relative shallowness.

The abiding memories of my time aboard Ellenis are the great times, the parties and the girls I met and fell in lust with. It’s true what they say about shipboard romances.

Beside all of the former memories there is one more thing which will always stay with me, the Greek bar waiter who looked after us on the voyage south, who we all took a shine to.

Because he had a permanent grin on his face and he had six perfectly functioning fingers on each hand. Never once in bad weather did he lose the trays of drinks his large hands supported, nor was a drop ever spilled by him. We, on the other hand…

When I walked ashore back in Wellington, I had a grin on my face a mile wide and £10 in my pocket. In short, I had had the time of my life. Sadly you simply don’t get that degree of pleasure these days when travelling by air.