The city from which he derives his surname, Shirazi, is the capital of Fars Province in modern-day Iran, a populous and bustling city known as the home of poets, wine, and flowers. 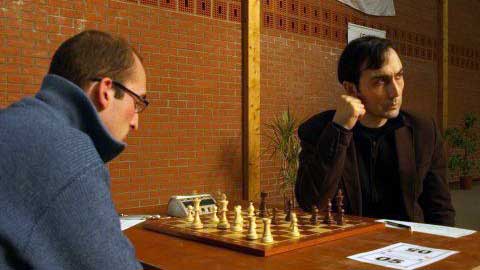 From this far-off and exotic land came young Kamran Shirazi, the inscrutable and aloof young International Master, armed with movie-star good looks and a chess style as individualistic and unorthodox as they come.

He was off to re-discover America—and show the Westerners a thing or two about the game his part of the world had invented some 1,400 years ago.

Both New York City and the greater Los Angeles area were fortunate enough to have, for a number of years from the late 1970s through the mid-1980s, this enigmatic Prince of Darkness in their midst.

Always attired in dark colors, primarily black.  Silent as a tomb both at the chessboard and before and after tournament rounds.

Habitually staring off blankly when not on the move, only to fix a quick and penetrating gaze at the position when his opponent’s move prompted him–and then, seemingly casually, produce winning combinations fraught with the wildest and most stunning tactical displays.

He won the Southern California Open five times and tied for first place in premier tournaments as diverse and far-flung as the World Open in Philadelphia, the National Open in Las Vegas, and the Memorial Day Classic in Santa Monica. His rating rapidly rose to one of the highest in the rolls of the United States Chess Federation.

A lightning-fast speed chess player who often competed for stakes, he was cajoled into making a brief, non-speaking appearance in the movie Searching for Bobby Fischer. His mystique, his charisma, had caught the attention of the film’s principals.

But soon after, as quickly and surprisingly as he had come, he mysteriously vanished from our shores.  He has now seemingly settled in France, still quite an active tournament player, and accepting talented students for private lessons.

For over two decades now, he has characteristically been introduced and addressed as Grandmaster Shirazi, although his true title is a notch below.  It is as if there is something about his presence, his manner, his mien, that demands the more exalted designation.

It is, even grander as if there is something in him of royalty:  the Poet-Lion of the Chessboard, a beautiful and rare black rose, a sphinxlike Prince Charming that will carry away the Princess of your chess position as if by magic.