Well, nowadays the big activity is reclaiming the portion of the patio taken over by plants and ants.  I don’t know if I will take the project as far as it can go, but something was really ‘set off’ when I looked at how some ‘innocent’ plants, just doing their thing, cheerfully overran the boundaries of the patio.

You know how plants are: slow except that if it is Spring or Summer and there is a rain and for 2 or 3 weeks you don’t pay much attention a garden or yard can be overwhelmed with the changes.  Suddenly, they seem fast.  I saw the valiant little tufts of grass out there, and the blur [not caused by going without my eyeglasses actually] of where the patio ends and the yard begins.  When I worked as an assistant gardener many years ago [which was druidry spiritual heaven, heads up OBOD] I got really into all that.  Like most of you I have also seen beautiful images of temples covered or half covered by trees and there roots – plants minding their own business would probably take your house, car and family without a second thought.  Normally, like with small cats, we just think it is funny because it impossible and unthreatening. 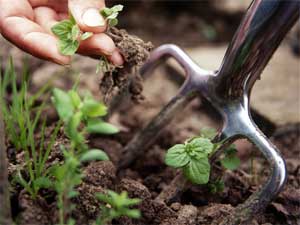 The other nice thing about this, is that my being out there working on that has caused at least a few interactions with neighbors.  Today, for all 20 or 30 seconds if that, the interaction lasted, I admitted to a woman German neighbor who lives in a farm house more than one hundred years old…only part of which is habitable right now and there is a small tree literally growing out of the chimney…that what really happened is that I am a human who noticed that other humans built a patio and so I am beating back the plants and rediscovering the patio as it is now.

I have moved a lot of sand and admitted to the man from Kazahkstan days ago that the ants really make good use of the sand humans lay down on top of the ‘regular’ soil for the original setting in the bricks [of course it is brick, this is Germany] and as I pulled up plants and devastated numerous ant colonies I came up with lots of sand.  In fact, I was out there with a little plastic bucket.

All the birds who live around here noticed.

You know sometimes, but not always, we forget that the animals and plants are also here and notice a bunch of stuff that humans …maybe ignore.  Some human is exhibiting territorial behavior.  If you are small and docile and want to feel intimidating just spend a week paying attention to how animals react to you when you move through.

How Do You Develop and Differentiate Your Characters?

Using the Internet for Work and Pleasure