I was having a chat on Facebook on the last night of 2011 with Brian, an old mate of mine from the many happy years I spent, living in Hamilton, New Zealand, who now resides in Canada. Both he and I worked at the University of Waikato, located in Hamilton, at the time.

Like good mates do we were reminiscing about this and that, recalling fond memories of our lives down at the bottom of the world in New Zealand, when he suddenly brought up the subject of a wonderful weekend we spent together, so many years ago.

Together with a whole lot of other friends, one weekend we all travelled by small homemade boats down one of New Zealand’s major rivers, the Waikato, from Hamilton to where it empties out into the Tasman Sea on the North Island of New Zealand’s west coast at Port Waikato – a trip of some seventy odd miles. 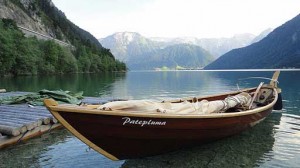 Several months earlier I had gone halves with another mate in a set of plans for an Acorn Skiff which we duly bought from America. I can’t remember the exact dimensions now, but I think she was roughly 11 foot 9 inches, with a 4 foot beam and sprit rigged with two set of oars. When empty she practically floated in less than 2 inches of water.

She was of clinker construction, having nine strakes (planks) per side. First I had to build a rigid jig to construct her on before I could begin building her proper. For her strakes, I used 6mm Kauri marine ply. I had some Kwela (a heavy New Guinea hardwood) left over from a previous boat build, which I used for Acorn’s rudder and centreboard as well as for the many bits of trim. When Kwela is varnished or epoxied it dries a dark wine red colour. With her pure white painted hull and the contrasting richness of the Kwela, my Acorn was truly a thing of beauty.

Came the Saturday morning of the long trip down the Waikato river. Brian and I loaded ourselves, a tent and some food aboard for the halfway camp down river that night, and together with all the rest of the boats off we went.

That first leg through a narrow gorge at the northernmost limit of Hamilton then on through Ngaruawahia, where the Māori queen at the time lived, is idyllic. From then on the river begins to broaden out. Passing Taupiri Mountain, sacred to all Māori where countless generations are buried, the river grows even wider and shallower as it heads through the coal mining town of Huntly before passing west of Te Kauwhata. From then on the river rolls on through a high sided broad gorge which always reminds me of one of the manmade cuts through the jungle surrounding the Panama Canal.

After the gorge the river arrives at the beginnings of the mangrove swamps at Tuakau, where the Waikato twists its way lazily through countless channels lined with thick mangrove, past white baiter’s shacks, towards our final destination at Port Waikato and its black sands.

For the first part of the journey from Hamilton to Ngaruawahia, Brian and I idly rowed, mainly to keep Acorn’s bow pointing in the right direction while the current did the rest, conjuring up in my mind visions of Ratty and Mole.

Once we were into the broader and shallower reaches, things rapidly changed. The wind increased and for the first time we ran out of water on one of the many hidden stony shoals, feeling Acorn’s centreboard bumping along. To ease her way I had to rapidly raise it. At that point we gratefully accepted a tow from one of the other boats until the wind dropped just past Taupiri. With the centreboard removed, and at the pace we were being towed, water was forced up through the centreboard casing at an alarming rate, which we quickly stemmed by stuffing a towel into. With the wind now at an acceptable level once more, we were once again on our own for a while, having dropped our tow line.

Then a scene any comedy writer worth their salt would love to have written, unfolded. I can’t for the life of me remember whether we were being towed, or whether or not we had raised the mast and spritsail. But I do remember being at the tiller, with Brian sitting amidships blissfully happy, while I concentrated on where the channel was beyond Acorn’s bow.

To roughly quote Brian: “From where he stood in the stern, Captain Jack suddenly took a few enormous strides forward, standing on me in the process before finding himself in the bow with a look of complete bewilderment on his face.”

We had run aground once again mid-stream; this time grinding to a shuddering halt, in danger of capsize as the river pushed Acorn relentlessly from behind. A lot of the other boat’s crew almost did the same thing as they laughed uncontrollably at the spectacle as it unfolded before their eyes. After that hair raising hilarious episode we shipped the rudder, tiller and centreboard and rowed for the rest of the journey.

Until Brian reminded me, I had completely forgotten all about that magical weekend drifting, rowing and being towed down the Waikato river. Thinking about the trip while writing this, my one abiding memory is just how physically weak the pair of us were at journeys end. When Acorn’s bow finally touched black sand, neither of us had any strength left in our arms to lift ourselves out. We had to roll our bodies over her gunwale onto the black sand. For two days we had used our arm’s muscles to row, completely changing their normal use.

One last thought. During her construction I religiously followed the plans, making templates for each and every part of her out of scrap, which, when I was satisfied, I offered up to the ply and Kwela. When she was finished I measured her and found to my great delight that I was within a tolerance of 1/8 of an inch when comparing her vital statistics to the plans.

For me, building Acorn was a true labour of love.

Amanda M. Thrasher Jul 3, 2010 3
Book Signings and Fairies You Just Can’t Beat That! Like most parents, summer is here and I have lost track…
Publishing