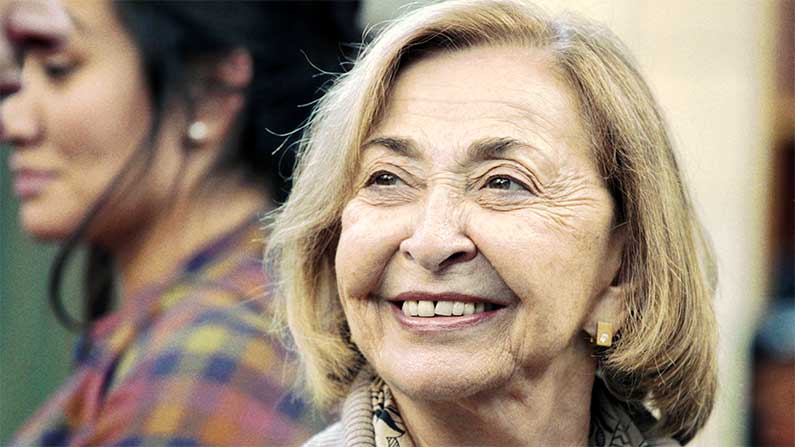 The First Lady of Israeli Theatre, 85 years young Lia Koenig, was in Amsterdam for the yearly Israeli theatre event SPOT ON.

Another visiting Israeli theatre maker will be Roy Horovitz, an actor, director, and dramaturge. He will perform an Israeli monodrama in English; My First Sony by Benny Barbash.

There will be a family theatre workshop, a screening of a documentary about Lia Koenig’s Loves, by Tali Ohayon, reception, dinner, and closing party.

There will be a panel discussion on Politics of Stage, comparing how theatre-makers in Israel and Holland reflect in their works the political situations in their countries. Among the participants of the panel will be Arjan Barel, Jair Stranders, and Victor Mentink.

The Speed Dating collaboration project between Dutch and Israeli theatre-makers will be launched by a virtual cocktail party, simultaneously at the Doelenzaal in Amsterdam and at Jaffa theatre in Tel Aviv, linked via Skype.

Born in Poland, her parents were famous actors. During WWII, they escaped to Russia and after the war settled in Rumania, where Lia Koenig studied acting at the Arts Academy of Bucharest.

​For her role of Anne Frank, in The Diary of Anne Frank (1957), she won an award from the Romanian Ministry of Culture.

In 1961, Lia Koenig emigrated to Israel with her husband, Zvi Stolper, a renowned actor, poet, and playwright. Before she mastered the Hebrew language, she was snatched by the Habima Theatre and played Eva in Brecht’s Mr. Puntila and His Man Matti (1962). That same year she won the Joseph Klausner Prize for her role as Eve in Aaron Megged’s Genesis.

However, Koenig did not immediately become one of the Habima stars. She was a virtuoso actor with a charismatic, dramatic presence and a highly skilled performance range, which could quickly shift from cabaret to serious, realistic embodiments of a large variety of characters.

This very dense theatrical texture made it difficult for her to fit the stereotypical typecasting that was popular in the realistic wave of the 1960s in Israeli theatre. As a result, she was mostly offered minor roles in insignificant plays.

At the same time, she established her position as the first lady of the Israeli Yiddish Theatre. Her husband, a Yiddish writer and theatre director, translated and adapted plays into Yiddish to suit her performing abilities, for example in a dramatic collage about the myth of the Garden of Eden. The large Yiddish theatre audience in Israel was thrilled to see Koenig perform in Yiddish.

During the 1960s, she and Stolper went on annual international tours with this material. In 1968–1969, they performed for a year and a half in South America. In her activities in the framework of Yiddish theatre, Koenig continued to develop the refined theatricality of her acting. She enjoyed performing in this language and often expressed her disappointment at the lack of a good Yiddish repertory theatre in Israel.

During the 1970s the Habima director David Levin, who was interested in modern European drama, was enchanted by Koenig’s unique acting abilities. He cast her as the old lady in Eugene Ionesco’s The Chairs (1970) and gave her the title role in Brecht’s Mother Courage (1975). These two highly poetic, complex and grotesque roles enabled Koenig to display her virtuosity as a mature actress.

The theatre critics praised her acting and criticized the management of Habima for not allowing her to perform more frequently. These roles were a turning point in her career and from that point on she was considered one of the leading actresses of Habima. More leading roles followed: Naomi in Allen Ginsberg’s Kaddish (1976), Tsirel Horwitz in A Simple Story after S. Y. Agnon (1979) and Leitche the shopkeeper in Hillel Mittelpunkt’s The Shop (1982).

Koenig was never identified with one single role, although she has been associated with roles of charismatic elderly women from a relatively early stage in her career. In 1999, Hillel Mittelpunkt wrote The Tourist’s Guide to Warsaw, whose leading character, Magda, was written especially for Koenig and was based upon her vital personality and dramatic capability. In 1998, she was widowed after more than fifty years of marriage.

The couple had no children. In 1986, she won the Israel Prize, and in 1999, she was awarded the Israel Theatre Prize for her life’s work.

​Lia Koenig was in The Netherlands from September 9 until September 15.​

Do Come and Lie to Me If Needed