It was a cold, wet, and miserable night in Toronto, yet a good crowd gathered to take part in a special ghost edition tour of the historic Elgin and Winter Garden Theater Center.

On this occasion, we were there to learn about the history and restoration of the complex and to hear the tales of the alleged ghosts and spirits that are said to inhabit the building. 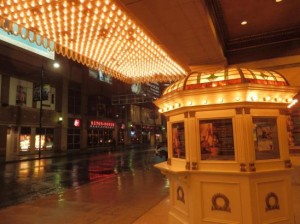 The organizers did not necessarily plan a spooky tour, but some of the stories were intended to send a chill up our spines. At exactly 7:30 pm, our guide Derek led the crowd into the main floor theater location. When we sat down, he began his talk.

This theater was built by Marcus Lowe, an American financier. At one time, he owned 112 theaters that continued to offer a mix of vaudeville and movies.  By 1920 Loew was the dominant movie theater owner in New York and had expanded into Canada.

As a successful businessman, Lowe bought a piece of property near Yonge and queen in Toronto. Under his direction, he built a legendary theater complex.

Somewhere along the way, Marcus Loew,  Louis B. Mayer, and Irving Thalberg all teamed up to start MGM, which was at its time a premier studio in Hollywood.   Sadly, Marcus Loew died on September 5, 1927 at only age 57, leaving a $30 million estate to his wife Caroline and their sons.

Then came Cats The Musical. They painted the theater beige. After restoration, they had lounges and washrooms put in. In the main floor, it once housed 2000 seats but now only 1,561 remain. Why? More leg space and comfort for its patrons, all to simulate the comfort you feel in your living room, allowing your comfort to last a three-hour show. The whole theater has been restored to the way it was.

The lamps are gone. 250 volunteers helped restore the theater, but only 100 volunteers remain. They are always looking for volunteers. Volunteers are always welcome.  All the walls are covered by fabric, much like what you will find in the TV show Coronation Street. They restored everything to match old photographs. Everything is the way it should be.  The only thing missing is the original chandelier. They are looking for it. The only thing fake is the ceiling that hangs in the main floor theater.

During the three-year restoration, crews discovered three spirits. In the main floor box is one. “There is one spirit dressed in black,” said Derek the tour guide, “He appears five seconds which is a long time for them, and is gone.” Many people have come and used Ouija boards to contact the departed.  At that moment, Derek recalled a conversation he had with one volunteer.

“I’ve just seen a ghost, one volunteer told me,” he said. “It was there ten seconds and it was gone.” On another occasion, one volunteer had a heart attack, died, and he is now said to be part of this group of ghosts. “So I must say,” Derek exclaimed, “hello, Ken, wherever you might be. I know I will be corrected on that one. I just know it!” he said with a smile.

There is also a lady in white, and the Lavender Lady, who appear only at rehearsals.  When the restorations happened, the crews were amazed at what they saw. There other members in the volunteers in the Garden Theater, who all saw something. “First time I saw the man in black suit and he was a tall man too,” continued Derek, getting slightly animated,  “When it happens once, twice, again, again…repeats itself over and over again, it is something else,” he added.

When Derek ended his talk, we moved up to almost the second floor.  Here Linda began a talk. She said the theater was at one time oil lit before electricity came. “In the past,” she began with a confident stride, “Edwardian women who had money would dress in their Edwardian best—they would wear their money!” Linda pointed to the elevators. “All the elevators were in their original condition.

In restoration, they made them computer controlled, some have had Plexiglas installed on them with holes drilled into it, but the elevators are still haunted.” The elevators hold 20 people. If it has more, it won’t move. “Most people won’t ride in the middle elevators—you press 4, it will stop at 2,” she added with a laugh. “That ghost Sam plays practical jokes.

Yes, it is computer coded and driven with all the bells and whistles, yet when the elevators stops, you have to talk to it’s sometimes, and coax it to continue. When it is stuck sometimes, I tell Sam I have 20 kids waiting down below. No more delays please!”

They are open for corporate events, film, and TV shoots, including commercials. The 2002 Academy Awarding winning movie Chicago was filmed here. As a matter of fact, you will find a fully restored, vintage elevator that was painted for the film Amelia starring Hillary Swank and Richard Geer.  What else was shot at this center? The TV shows Lost Girls, Flash Point, and the TV show Copper.  Back in the fall of 2003 Lindsay Lohan came to the Winter Garden to film Confessions of a Teenage Drama Queen.

It was said that Amelia Earhart’s sister lived in Toronto and Amelia came to visit and they would come to this theater.  As we continued to walk up an escalator, Linda the volunteer would continue to talk. “I have more ghost stories for you,” she chimed with enthusiasm, “I love anything that is out of the ordinary. Imagine the Edwardian Lady would appear on a staircase here.

They used to travel seven floors to get to the top. Why? In those days, there were no escalators. The elevator would break down, so why do that when you can walk seven flights up.

“ Linda would recollect her ghostly encounter of being watched. “On one tour, I was with a group of people. They were from the paranormal society and it was a private tour. So they had their eyes open to ANYTHING! Do you feel anything? One of them would ask me. Anything? Or see anything? Right there and then I felt like a force field prevented me from moving forward.

Only afterward someone tell me a Lady in White went through me. Why? Because they wish, as I was told, to pick up your energy.  As a rule, we never talk about ghosts, unless asked. Why? Because some people are not comfortable. For example, after a show, the manager and his assistant do a clean sweep. They walk through and one of them hears their name called.”

This caused a stir of excitement to travel through the gathering.  We made it to almost the second floor.  Where are we now? “This is not quite the first, nor the second floor. We are in between floors. This used to be a roof or a storage area, but has since been redesigned into a lounge area-and we call it the Cascade Lounge!”

Thus during restoration, they created such a network because in the past, in the times of Cats The Musical, theater patrons had to exit the premises and go to a nearby restaurant to go to the washroom or eat food. Such a lounge is much like a trendy café, or nightclub.  “We have a total of five cascade lounges, all where refreshments or washrooms can be found.”  In such locations, they had theater backgrounds decorated the scenery.

On one floor, they had an Egyptian-style tapestry that decorated the wall. On another, they had a background of the New York skyline.  “Remember,” she would continue, “in those days, in Vaudeville actors, or anyone who was involved in public speaking, they would have cocaine lozenges. Cocaine lozenges were legal and popular. This is where the tour guide would maintain the spooky theme of the night.

“Just imagine a cashier counting money at the end of the night and this worker hears her name being called in an empty theater!” Boo! “They would drop the money and run for help!”

We now made it to the fourth floor. Outside the elevator, Linda recalled the frigid cold of a ghostly presence. “For some reason, it even smelled like a horse barn when there was no horse in the area.” Such logic would send a ripple of whispers throughout the gathering.

When we made it to the Winter Garden theater, another volunteer took charge, after everyone had sat. This level used to have a show every night at 8:15 pm but in 1930 it was stopped.  The second level of theater was shuttered and its entrance was covered up by a fake ceiling.  When Cats began, the restoration of the Winter Garden commenced.

They discovered 8,000 breached tree branches in the ceiling. This had to be removed. The restoration members then were sent to Caledon, where they fetched 5,000 branches, not 8,000 as before. It was then prepared with the right preservatives and oils. Once it was all put into its rightful place, new technology was installed, including air conditioners with lighting and a state-of-the-art sound system.  In 1950, 1,462 seats were in place, but now under a thousand remain.  As a matter of fact, all the seats at the Winter Garden are replicas that are painted in the garden themes.

Originally, it had cheap water-soluble paints. They used raw bread dough, affixed it, rolled it over each painted surface and cleared every square centimeter was cleaned and repainted. “80% of the paint is original.” They have the original fire curtains, including the orchestra pit. The orchestra pit is never used, or rarely used at all. The actors and musicians are put on the stage.  All the lanterns were replaced because of the theft of lanterns. It is said, one of the seats in this theater came from the Biograph Theater in Chicago.

“So one of the seats in here,” he said in a cryptic type way, “could be the seat where John Dillinger sat the night he died in a police shooting.”

If that is not spooky enough, it is said, a saxophone player took a shortcut off the stage, fell, breaking his neck. When they were renovating the location, workers would sense a presence. Eventually, they had a séance, a spiritualist got a uwegie board, and they came up with a name for the culprit. That ghost came to be called Sam and he is known as a practical joker.

He is seen as once a person who was fond of drinking and merriment but is friendly. Another ghost is said to be a woman. She is seen to watch set-ups, or rehearsals. When she is approached as if she were an intruder, she disappears, and the smell of lavender is in the air.  They call her the Lavender Lady. She is like trapped energy in a form.

An usher had a weird story. There was a standup comedian performing a show and the usher felt a cold draft. She put down the flashlight and it started to flash on and off repeatedly.  “Lots of energy in here,” continued the tour guide.  “Jessica Tandy was in a movie that filmed right here in the Winter Garden Theater too.”

What else was shot at this center? The TV shows Lost Girls, Flash Point, and Copper.  Back in the fall of 2003 Lindsay Lohan came to the Winter Garden to film Confessions of a Teenage Drama Queen.  And of course… Richard Geer inAmelia which also stars Hillary Swank.  So look out for more tours!