I have one specific game I love to bits. It is – Battlefield Bad Company. I’ve nearly worn the disc out playing it.

The game is set in a future war between the Russian Federation and the United States. It concerns a four man squad from “B” Company of the 222nd Army battalion, more commonly known as “Bad Company”, composed of troublemakers the US army doesn’t necessarily want. Along the way you encounter a group of mercenaries under the control of a sinister character called the Legionnaire, who pays his men with gold bars.

You take the part of Private Preston Marlowe. Why you are here isn’t explained, but you must have done something pretty bad to wind up in Bad Company. 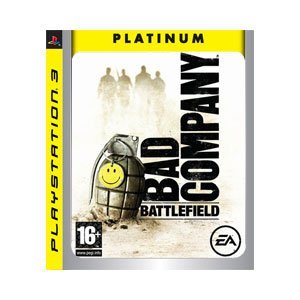 The rest of the squad consists of Private Terrence Sweetwater aka Sweets, who just doesn’t know when to shut up. Either he is constantly whining which winds everyone up, or he is boring you to death with useless facts.

Next we have my personal favourite character – Private George Gordon Haggard Jr., aka Haggard or Haggs, a pyromaniac who is always getting the squad into scrapes. Haggs is the guy who ‘blows stuff up’ within Bad Company. His passion for explosions is legendary. The two other loves of his life are the Dallas Cowboys Cheerleaders and gold. Haggs constantly argues with Sweets. Haggs is definitely the source of the comedy within the squad. At one point in the game he inadvertently invades another country in his search for the mercenaries gold bars, making it necessary for the rest of the squad to go after him. Haggard is a ‘good old boy’ in the finest traditions. He is the least intelligent member of the group, but the most likeable. He comes up with the funniest lines. Haggs has a secret desire to own a monster truck like ‘Truckasaurus Rex’. 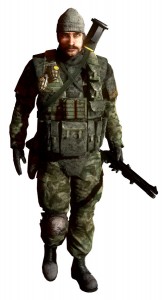 Lastly we have Sergeant Samuel D. Redford aka sarg, or Redford, who is the long suffering leader of the squad. Redford foolishly volunteered for his position, in exchange for shortening his term of service and has only three days left to serve.

I’ve played the game in all three levels of expertise – easy, normal and insane. Each time I play it, thanks to the excellence of the maps, I choose a different path to take. In one specific map you are on your own while you try to find the rest of your squad who are holed up in a monastery high up in the hills.

I also have the follow up game – Battlefield Bad Company 2, in which the guys have to battle against seemingly endless numbers of bad guys. The shame of it is that in the second game, Haggs has lost his sense of humour while the rest of the team are the same as they were in the original game.

I hope and pray that the game’s originators – Dice – produce a third game for the squad and that they give Haggs back his sense of humour.