In 1968 British International Master David Levy famously made a bold bet that no computer chess program would be able to beat him ten years from then, although the new field of chess programming was burgeoning and chessplaying computers were getting stronger by the month, never mind the year.

That turned out to be a classic understatement.  By the late 1980s chess hardware and software had developed to a point where even strong Grandmasters, Levy’s chess superiors, were having trouble besting the latest generation of chess computer.  It was now admitted by most that it was just a matter of time before human players would be forced to concede chessplaying superiority to the mere machine. 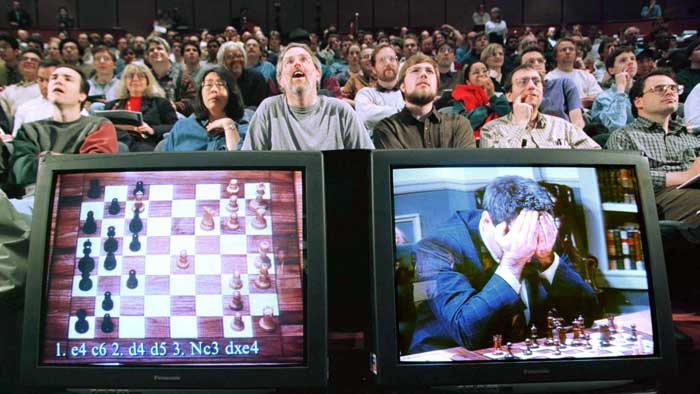 The inevitable arrived in the ‘90s, when IBM’s Deep Blue defeated World Champion Garry Kasparov in a short match.  It was now clear that the best of the chess programs, programmed by top players and computer experts, and capable of analyzing literally millions of positions per second, had secured dominance.  The impressively sturdy egos of our finest players were taking an ignominious beating.

And it has remained that way to this writing, some 15 years later.  No gaming sports book will post odds in favor of a leading Grandmaster when facing a world-class chess computer program in a match.  Past experience, as well as technological development, will prevent it.  The dedicated computer chip is favored to triumph over the human brain.  A series of microprocessors, usually working in a so-called “brute force” search mode, will win despite the talent, judgment, and experience of the best our race has to offer.  Program names like Rybka, Cray Blitz, and Shredder are on the awing lips of young players who know increasingly little about our carbon-based legends like Lasker, Capablanca, Fischer, and Karpov.

Traditionally, in tournament chess there have been ethical standards to be strictly observed.  The most obvious would be that a player may not consult with any other player or consult any chess book or other chess reference during the playing of a rated game.  However, the most sophisticated chess computers have programmed into them thousands of played games as well as mountains of analysis regarding specific opening variations.  Further, they are supplied with endgame “tablebase,” a computerized and precalculated exhaustive analysis of certain difficult-to-play denouements.  In actuality, they are continuously “consulting.”

Formal chess matches are always played with a time limit.  Each combatant has only a certain amount of total time in which to play a set number of moves.  Exceeding that time limit results in a time forfeit, and loss of the game, regardless of the position on the board.  In games even between the best players, time forfeits sometimes occur, as do furious “time scrambles” as the time control nears, in which uncharacteristic blunders are made throwing away perfectly reasonable positions with good chances.  However, computer programs are set to distribute their time prudently in all board situations, and they cannot exceed the time limit or be subject to harrowing time pressure near the control.  They cannot fall victim to the human frailties of confusion, disorientation, or a sudden lapse in confidence.