Chess Myths among the Masses

That chess is probably the most complicated and challenging game in the world is accepted.

That years of study and practice are usually required to achieve Master status is a given.  Yet the common view of many realities of chess has been distorted and sensationalized by many outsiders to the chess world, particularly journalists hammering out a story they believe will not only capture reading interest, but serve to astonish. 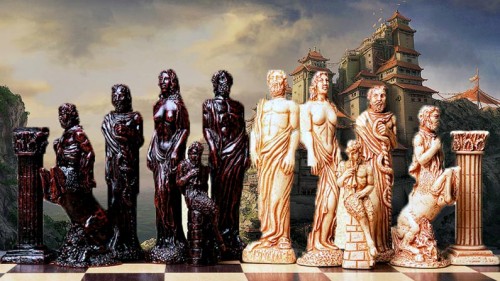 A recent case in point was a 60 Minutes interview with and story on Magnus Carlsen, the youthful current World Champion.  It was titled “The Mozart of Chess” (although there have been several younger geniuses in chess history), and one noteworthy feature was the oohing and ahhing by the reporter over the champion’s playing 10 games simultaneously blindfolded.  An impressive accomplishment, it is true—yet no mention was made that the record for simultaneous blindfold play is 50 games and upwards, and that virtually any of the top five players in the world at any given time could accomplish the ten-game blindfold feat, if interested in doing so.

Another common misconception is that great chess players, even “mere” Masters, customarily think many moves ahead in any given position.  This is rarely the case.  However, they are capable of doing so in certain lengthy forced variations.  Still, the common chess position, even a complicated one, does not admit of the player even needing to try to look far ahead; the key, among Masters and Grandmasters, is evaluating, more than farsightedly visualizing, and they possess fine and rare judgment of positions to occur soon, and do not often overlook opponents’ counter-shots, which lesser players do on a regular basis.

“I’ll bet he could beat me in five moves.”  We hear this regarding the skills of not only world-class chess players, but even Masters and Experts (a lower, but still impressive, level).  Not even close.  A strong and seasoned player does not go King-hunting early in the game, but attempts to develop pieces, control the center, and keep his or her own King safe.  There would be no five-move debacle.  However, after five or ten moves, it is likely that the much superior player would have a clear advantage, based on elements worlds more subtle than a blatant checkmate.  The game itself, however, would be far from over in terms of total moves.

One more common misbelief—though certainly not the last—is that the greatest chess players have been, almost to a man, social misfits, outcasts, and/or downright nuts.  This view certainly proliferated because of the antics and shenanigans of American World Chess Champion Bobby Fischer, champion from 1972 to 1975, an enfant terrible and almost certifiable madman by many standards.  But, while many of the greatest players have shared the monomaniacal devotion to chess that Fischer demonstrated, most have been professional gentlemen that one would value entertaining at the most formal and elegant gathering.

The chess world is a fascinating and intriguing one, and one well-stocked with some astoundingly strong players and remarkable exploits—but one does not need to distort things to outsiders or to exaggerate skills and accomplishments in order to appreciate and wonder at the actual marvels of this all too little-known sphere of human endeavor.