The American game of checkers, in England and elsewhere known as draughts, has proven an easy one to ridicule. Chess players scoff at its relative simplicity.

Television and movies depict it as a harmless and virtually mindless pastime for elderly gentlemen to while away the hours. Children are furnished with brittle checkerboards and cheap plastic pieces to keep them busy and entertained in much the same fashion they would be with Candy Land or Chutes and Ladders. 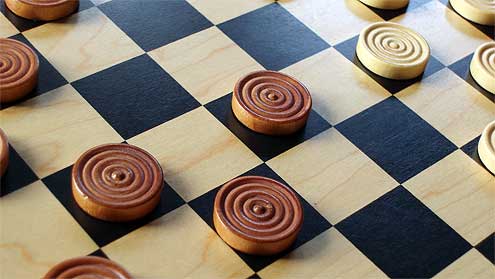 Chess players commonly point to the fact that all the pieces in checkers move in the same manner, so the number of possible positions and strategies are dwarfed by their own game. Furthermore, the more knowledgeable ones adduce the indisputable fact that checkers has been “played out” since about 1930 so that all games between strong checker Masters must end in draws. Consequent to that reality, many checker tournaments since that period have featured opening moves, not the very strongest, drawn by lot, and the participants must begin from a resulting position that they would not have created if left to their own devices in the debut.

So it is true that checkers is not the Royal Game of chess, and it also pales in comparison with the monumentally intricate Japanese board game of Go. But is it child’s play?
The highly respected Russian chess magazine 64, published since 1924 monthly as a magazine and in various periods as a weekly magazine or newspaper, obviously thinks not.

A draughts column along with articles on the game and challenging checker problems have been a staple of the publication since its outset. The World Mind Sports Olympiad, administered through the international Mind Sports Organization, has included draughts along with chess, Go, contract bridge, and other worthy mental-skill games since its first competition in London in 1997.

The relation of a personal anecdote should cinch the matter. Decades ago, as a young and cocky Expert chess player, I frequented the chess tables at Santa Monica Beach near the pier and directly across from famed Muscle Beach

. Players of nearly all strengths stopped by now and then, and it was common to play speed chess for stakes. The inlaid 64-square boards were also acceptable for checkers, so occasionally one would find a group of draughts players competing and kibitzing. One weekend afternoon I noticed such a group and walked up to watch the proceedings. I started thinking. Here I was a strong chess player, skilled in both tactics and positional play, I knew well the rules of checkers and had indulged in play at various times, and I could not fathom how any of these old coots could defeat me.

I would show them how the practitioner of a real game of skill could dust them off without too much trouble.
I ascertained which was the strongest player and soon was cordially invited to sit down and play if I liked. I accepted with a carnivorous attitude I attempted to mask.
But the upshot has left me shaking my head to this day. Not only did I lose each of the three quick games played, but by the time six or seven moves had been played on each side in every game, I found myself a checker or two down, having fallen unsuspecting victim to a tactical trap. The remainder of each game was a mere matter of technique, in which I was given no chance.

I learned before taking my sheepish departure that this player was “pretty good, but not an Expert.” As in chess. Expert is below Master.
Checkers, finally, is not chess or Go—but studied and played seriously it is definitely a worthy game of subtle strategy and sparkling tactics.
And it is most definitely not just for kids