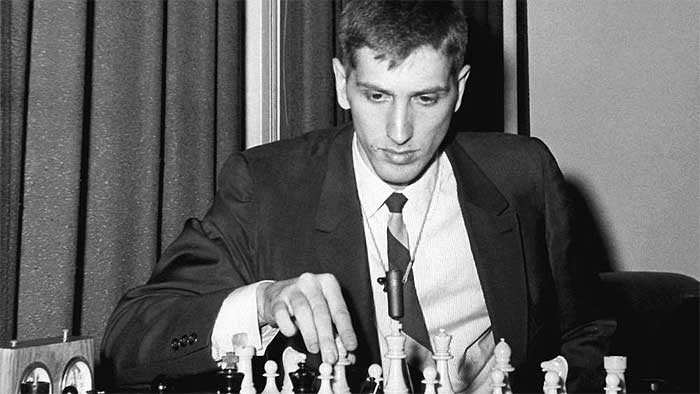 It seems only natural, in retrospect, that future World Chess Champion Bobby Fischer’s 1964 national simultaneous exhibition tour would have a stop in the L.A. area, but the particular venue, as well as the smooth and successful organization, were a testament to the vision and skills of chess patron Jacqueline Piatigorsky.

The historic hotel (today having been transformed into the senior home Hollywood Knickerbocker Apartments) sits just off Hollywood Boulevard across the street and only a few blocks east of what was Grauman’s Chinese Theater, still home of the footprints of the stars. The hotel has a long and rich history of catering to the elite of the show biz world. It was built in 1923 in Spanish Colonial style, and immediately became a meeting place of the stars.

Rudolph Valentino was a regular at its bar, and on Halloween of 1936, the widow of Harry Houdini held a séance on its roof in hopes of contacting her lost legendary husband. Over the years, its guests have formed a Who’s Who of Hollywood, from Marilyn Monroe to Joe DiMaggio to Elvis Presley, and on and on. Still today, walking into the lobby is like walking into a time machine the takes one back decades into the golden age of American cinema.

Mrs. Piatigorsky, an accomplished chess player herself, was in a phase of very active chess sponsorship and philanthropy and was fresh from her and her husband’s noteworthy success in organizing the 1963 First Piatigorsky Cup international tournament.

(It might be remembered that Gregor, her husband, was an internationally acclaimed cellist and she a member of the distinguished and nearly unimaginably wealthy Rothschild family, the European banking and finance dynasty.) She was the driving force behind the Hollywood simul and was an active participant in every stage of its preparation and organization.

On April 12, Fischer would play 50 opponents, and the fee for participation was reasonable. Grandmaster Isaac Kashdan served as Director and Arbiter, as he had several months earlier in the first Cup tourney (which was, incidentally, held at an equally distinguished and historic site, the Los Angeles Ambassador Hotel). Mrs. Piatigorsky, with her customary energy and attention to detail, was at the site early in the morning the day of the exhibition.

Everything was to go as planned and scheduled—which it did.

As the hour of the display drew closer, the converted ballroom filled with participants and quite a number of spectators jostling for good views of the coming action. Fischer arrived on time, and without a hitch—in contrast to scores of controversial incidents in later years, and a few already in his callow youth—and met with Gregor and Jacqueline as well as GM Kashdan and several others involved in the organizational preparations.

When all 50 boards were accounted for, Kashdan walked to the middle of the large rectangular playing area and made his comments. He graciously thanked the organizers, Fischer himself, and then reviewed the simple rules of simultaneous play etiquette and decorum. He introduced the young Grandmaster, and the display began.

A few points of interest there were in the composition of both the aggregate of participants as well as the large group of spectators. First, there were more young players facing Fischer than one might expect. At least 8 or 10 of the boards were occupied by youthful combatants not over the age or 16 or 17, and several obviously younger.

The explanation is again tied to Mrs. Piatigorsky, this time in her role as patron and “manager” of the Herman Steiner Chess Club, at that time, and of its Steiner Juniors section. Several of the boys were members of this organization, and were already tournament-tested and improving rapidly. (This fact was to be demonstrated with startling clarity a few hours later when the final tally was made.)

The audience featured a Who’s Who of local Masters, perhaps not surprisingly. For one thing, simultaneous exhibition etiquette prohibits Masters from competing, and for another, an event of this high level of interest and excitement was rare indeed in the world of Southern California chess.

No, there was no analysis room, no demonstration boards set up anywhere for review by strong players of interesting ongoing games: the local Masters were present as chess fans only. (Selecting several and arranging a clock exhibition by Fischer would have created quite an interesting scenario itself—and given the playing strength of many of them it is unlikely the young lion would have emerged unscathed.)

The hours passed, and opponent after opponent fell, but several of the youngsters continued to hold their own surprisingly well. Fischer’s final result was notable in more than one way. First, the only three to score against him were members of the Steiner Juniors: Donn Rogosin, the lone win; and Nicholas Enequist and Andy Sacks draw.

The exhibition had apparently gone without incident, without controversy, without the type of distractions that came to characterize so many of Fischer’s playing engagements in later years. However, there were two rather quiet occurrences that foretold much about the future.

In my game, I was able to force a perpetual check; it was then a dead draw. There was no reasonable way for Fischer to avoid repeating moves. When I checked for the first time, I quietly and respectfully offered a draw. He looked at the board, made no expression or reaction to my offer, moved his King, and walked on. On the next check I refrained from speaking.

On the third, I had the youthful assertiveness to vocalize “Draw?” again. He looked at the board only, remained stock still for a few seconds, and then used both hands to scatter the pieces. He walked to the next board without glancing at me or showing any attention to anything but the position on that subsequent board. He was visibly peeved but within himself.

On my very left at this point, the space was open. Earlier it had been occupied by Donn Rogosin, my fellow Steiner Junior, and my friend. Against him, Fischer had made a fine and creative Queen sacrifice early in a Sicilian Defense, Sozin variation—but had blundered horribly about 10 moves later and had lost.

The young Grandmaster’s reaction at that time had been quite similar to his behavior when my game ended: not a word, but extreme frustration and anger at himself unmistakably evident. And no graciousness, no offer of a handshake, nothing but directly on to the next board.

However, the most intriguing and foretelling detail of the display was less obvious still. No spectator could have noticed it, and Donn and I learned of it only well after the day of the séance. It was communicated to me by Isaac Kashdan months later at a chance meeting I had with him visiting a local tournament.

He revealed that in a little chat initiated by Fischer, just the two of them, and just minutes after the very last game concluded that April 12 (some six hours after the exhibition had begun), Bobby asked him if he (Kashdan) had noticed “those two kids,” as he put it, discussing our games in progress or consulting in any unethical way during play. Fischer himself had not noticed it, he was quick to point out, but he was just wondering…

Incredible! And that was obviously the way Kashdan viewed it as well, as he offered the information to me. There was a sadness and a shaking of the head by the kindly and worldly-wise old man. It was an early manifestation of the P-word, which would progressively take and hold Fischer in its clutches for the remainder of his life.

You: A Face Of Destiny