The Deadliest Flu in History (3)

As mentioned in Part one and two, Camp Devens had its’ outbreak of measles and pneumonia, and the camp and medical officials issued high rating, everything was clean.  Also, this camp sat so close to Boston, scientists began to use the camp for scientific studies including streptococci, and additional research on pneumonia, questioning why the mortality rate was higher regarding to race.  It was late summer at Camp Devens when Major Sellards began an experiment-using monkey’s first, and next men, regarding the measles in search of a vaccine. 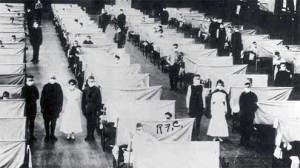 Camp Devens could hold forty-five thousand men and by September 6th the total was thirty-six thousand on the grounds.  The hospital, which was on the site would hold one thousand two hundred patients and they had admitted eighty-four patients.  There was never a thought of any emergency that the specialists at the camp could not control, having the best doctors and scientists on site.

Where did the problem begin, and how did it get out of control?  A report issued by the Boston Public Health Department, which stated a sudden increase in pneumonia at Camp Devens.  This report came before the harbor incident mentioned in part two.  No one knew if pneumonia came from the Navy Commonwealth Pier.

The first alert was noted at Camp Devens on September 1st when four men were diagnosed with pneumonia.  Remember this is five days before eighty-four men were in hospital.  Not one doctor or specialist believed they were looking at influenza.  Then, another patient arrived at the hospital with different symptoms, one that brought alarm to all personnel, he would scream if someone touched him;  he was diagnosed with meningitis, and the following day twelve more men were diagnosed with meningitis.   The doctors at the camp remembered a small outbreak of meningitis four months prior, involving four men, and one hundred and seventy-nine men then placed in quarantine.  It would take two days after the recent outbreak of meningitis to admit case after case diagnosed with the influenza virus.

On September 24th three hundred and forty-two men were diagnosed with pneumonia.  So Camp Devens was battling meningitis, influenza, and pneumonia.  On a daily basis, hundreds of men began coming to the hospital and additional medical personnel had been requested to report to the camp immediately.  Within a couple of days both men and medical men were dead.  There was no controlling this disease, something without a name.  An officer at the camp requested Red Cross be sent in but was told they were managing citizens and could send only ten or so people to help.  Within two days after the help arrived from the Red Cross, eight of them were dead.

I found it interesting how the medical reports were written, this is only one sample;  “No ordinary influenza, rapidly develops pneumonia two hours later mahogany spots on cheek bones, few hours later cyanosis extending from their ears and spreading all over face.  Hard to distinguish white men from black men.”

The thought of cyanosis at Camp Devens, the doctor continued writing notes, “only a few hours and death comes.”  The doctor ended this report, “dropping like flies.”  At the time the average was one hundred men died every day.

If you ever read about this flu, you knew about the blood which would exit from the bodies, and how quickly the hospital filled to capacity despite the fact one hundred were dying each day.  When they ran out of rooms, people were laying up against the walls in hallways.  The worst part, no one had any cure for this disease.  The officers called in the best doctors who worked on several recent outbreaks of different diseases for a vaccine, but the best doctor, Dr. Avery from the Rockefeller Institute was asked if he could perform some testing.  Doctor Avery knew any prevention had to be found in the lab.

Few diseases are as infectious as influenza and isolation were believed the way to control any outbreak.  At this point at Camp Devens, they knew to keep those men at camp and isolate them from the sick, but at the same time, outbreaks of the same symptoms were happening at other camps.

On September 4th in a New Orleans Hospital, the first case of influenza was reported, in one day forty-two additional cases with the same symptoms as those at Camp Devon.

On September 7th three hundred sailors from Boston arrived in PA. Navy Yard.  This would be the largest group of men to depart to destinations around the world.

On September 8th the same disease was reported in Newport Naval Base in R.I.   The world was infected and the death rate more than doubled that of the Bubonic Plague in 1900.