But why? The “stinking” part is obvious, but why “rose?” Garlic is an allium that is part of the Liliaceae family. Garlic is closer to a lily than a rose. So what is the origin of the name? 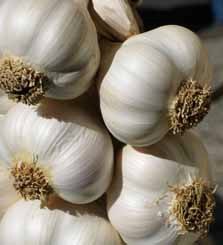 Then there is the white-skinned, sweet-flavored elephant garlic, which is not a true garlic, but a relative of the leek.