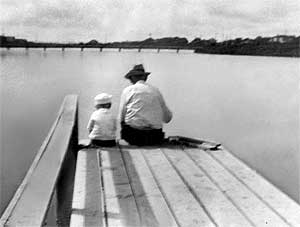 After Edgar Cayce realized in 1901 that he could give medical readings, he proceeded with much reticence and caution because he truly did not understand how he was able to diagnose medical problems he had never heard of, after going into a self-directed hypnotic trance.

His primary concern was that he might harm or cause the death of some innocent person. Most of his earliest readings were for family members, friends, or residents of Edgar’s hometown of Hopkinsville, Kentucky, who had caught wind of his unusual, unexplained abilities.

Approximately twenty-one months after Edgar had given his first psychic reading for his lost voice, he was put in contact with a well-to-do Hopkinsville resident by the name of Charles H. Dietrich, whose almost-six-year-old daughter Aime had regressed from being a bright two-year-old into a yet-undiagnosable state of arrested mental development and constant convulsions.

With the assistance of Al Layne, a Hopkinsville amateur hypnotist and unlicensed osteopath at the time, initial reading and a few follow-up readings for fine-tuning were given to diagnose the cause of and remedy for Aime’s unexplained condition.

The notes from these readings were retained by the Dietrich family but at some point in time they were lost or thrown out. Years later, after Edgar began retaining copies of his readings, he asked Charles Dietrich for a letter for his files outlining Aime’s medical problems and their resolution, and the grateful Charles responded with a detailed sworn affidavit, which has been carefully tucked away in the Edgar Cayce files since 1910.

Edgar Cayce Jr. [Letterhead] [DS: Edgar’s father’s name was Leslie, so he was not truly Jr.  Leslie had a brother named Edgar, and when the local post office got tired of delivering mail to the wrong Edgar, Edgar inherited the Jr. notation to keep the post office happy.] Psychic Diagnostician
Hopkinsville, Ky.

This went on for two years, or until she was four years old. At this time, she was taken to Dr. Linthicum in Evansville, Indiana, and Dr. Walker, also of Evansville, was consultant physician. They said a very peculiar type of nervousness was all that ailed her and proceeded to treat her accordingly, but after several months of treatment, with no results, the treatment was stopped.

In a few months, Dr. Oldham [D.O.] of Hopkinsville, Ky. was consulted and he treated her for three months, without results. Later he took her for four months more treatment, making seven months in all, but without results. She was now six years old and getting worse, had as many as twenty convulsions in one day, her mind was a blank, all reasoning power was entirely gone.

March 1st, 1902, she was taken to Dr. Hoppe of Cincinnati, O., who made a most thorough examination. He pronounced her a perfect specimen physically, except for the brain affection, concerning which he stated that only nine cases of this particular type were reported in Medical Records, and every one of these had proved fatal.

He told us that nothing could be done, except to give her good care, as her case was hopeless and she would die soon in one of these attacks. At this period our attention was called to Mr. Edgar Cayce, who was asked to diagnose the case. By auto-suggestion, he went into sleep or trance and diagnosed her case as one of congestion at the base of the brain, stating also minor details.

He outlined to Dr. A. C. Layne [Al C. Layne, D.O.], now of Griffin, Ga., how to proceed to cure her. Dr. Layne treated her accordingly, every day for three weeks, using Mr. Cayce occasionally to follow up the treatment, as results developed. Her mind began to clear up about the eighth day and within three months she was in perfect health, and is so to this day. This case can be verified by many of the best citizens of Hopkinsville, Ky. And further deponent, saith not.

Doug Simpson is a retired high school teacher who has turned his talents to writing. His first novel, a spiritual mystery titled Soul Awakening, was published in the United States in October of 2011, by Booklocker. It was reissued in October of 2012 by 5 Prince Publishing as Soul Awakening, Book I of the Dacque Chronicles. For further details visit them at . It is available in print and eBook format through most bookstores around the world.

Soul Rescue, Book II of the Dacque Chronicles will be published in November of 2012. His magazine and website articles have been published in 2010 to 2012 in Australia, Canada, France, India, South Africa, the United Kingdom, and the United States. His articles can be accessed through his website at http://dousimp.mnsi.net.

LV Gaudet Apr 22, 2011 3
Twilight - Review For my second book review attempt, I chose another series by a well heard of and much loved…
Publishing