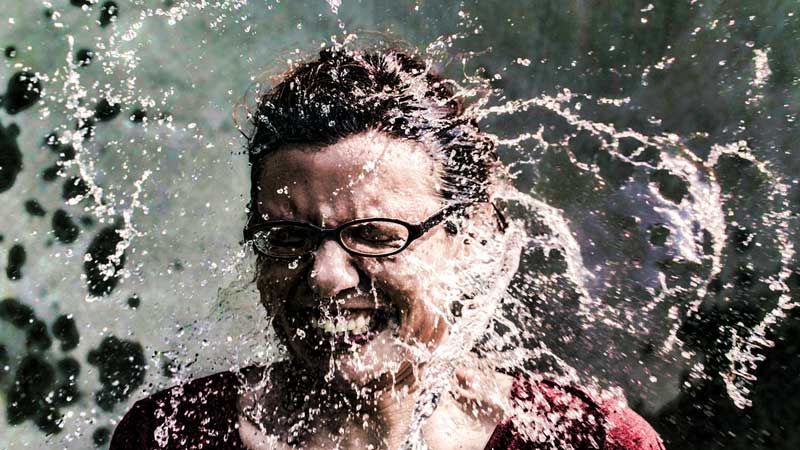 When I finish an article in a series, I have an idea where I am going for the next installment.  I listed the next installment which would be this article as A Splash In The Night.  Am I at an impasse with nothing to write?  Oh no.  That would be simple; I’d just close my laptop and disconnect.

I need a disconnect for all the avenues this title wants me to run down.

The Columbus Day weekend is not only my birthday and a milestone one to boot, I  traveled back to spend the weekend in the house that I called home in those years I am recounting in this series.  While it was not  30 degrees below zero {I left out the below zero in my last installment}, it still was 20 degrees less than I am living in on Long Island, New York.

The house had major renovations over the past 38 years still has its bedrooms on the second floor and its bathrooms on the first.

Ironically the large bath that I lived with is turned into a ‘sun porch’, a bit of a misnomer since it snows nine months, rains two and a half, and if you’re lucky enough to be in the area when the two weeks of pure delight occur, the sun shines.  The grass is always green and lush, just underwater.

Okay, that is a slight exaggeration.  The snow, rain and the beauty of the area are the truth.

Now there is a small half bath off the kitchen and the room that was our dining room is now the major bath with a sunken tub with Jacuzzi;  again, a room to dance in.  The large bath is located at the bottom of the stairway to the upper floor.

The stairwell is still as steep as remembered.  During the winters we would sometimes shut off the upstairs and rearrange so the bedrooms would be on the main floor but that was only in the most bitter of the cold snap.  There were no closets on the lower floor save the pantry so having our clothing in boxes was needed but not favored.

During the time we enjoyed using the bedrooms and even if the cold was still in single digits but at least above zero, nightly trips to the bathroom were avoided as much as possible.

For all you who sleep through the night without visits to the bathroom, I salute you!  For all my fellow travelers who stumble, fall, stub toes and feet or merely rush to answer nature’s nightly call, hello friend!

I have always had what the media calls an overactive bladder.  I was the only child I know that brought extra ’undies’ to school; not, I suppose, a topic the young can easily discuss without embarrassment though, so there may have been other closet pantie carriers.

So, living in a home with beds on one floor and baths on another connected by stairs that rival a down hill slalom was a real – I’m at a  loss for words in a description, horrific comes to mind, closely followed by frigid experience.

I had thought to possibly use a ‘thunder jug’ which is what ancestors did when not wanting to go to the ‘out house’ but that meant carting a porcelain jug filled with liquid down those self-same stairs in the morning; and, yes, I did mention cold.  The lips of those jugs rival a do-nut shaped cushion filled with ice cubes.  A shivering prospect.

Too, making it to the actual bathroom in the night was another delight.  Picture yourself:   nimble of foot, swift moving, able to see {a little} in the dark as you speed around a bed, skitter down the steep stair, swivel around the newel, rush down the hallway veering sharply to the right through the maze of the kitchen, arriving at your destination, only to land in icy cold water!

Did you leave a bucket of water lying about?  NO!  Only a husband who leaves a bathroom seat in the upright position, a true salute to manhood.
I hear you ladies.  Put covers on the lid.  That makes it impossible for the lid to remain open but also leaves the male sex in danger of Bobbittism.

The problem of the upright open lid seems to be a bane to many women.  Nagging is not an answer because the male of the human species has a tune-out gene.  Or as I see it a – drone petrol suppressor.

I found that to have cooperation I needed not only vigilance but humor.  The only time an open lid is a problem is when one is not totally aware as in half asleep or in urgency or heaven forbid, both.

I bought nail polish in different hues including blues and greens along with the pinks and reds.  I removed the toilet seat and drew flowers and stems and leaves along the outer edge;  under that, I printed in RED capital letters PUT ME DOWN!!  IF YOU ARE READING THIS, IT MEANS YOU!!!

Other than a stray ‘dissing’ remark, all four found this to be amusing but more importantly was a constant reminder to follow through so there would not be any more mom falling through to a splash in the night.