Jacqueline Rebecca Louise de Rothschild. The name itself is filled with stateliness and grace.
We in the greater Los Angeles area in the 1960s and early ‘70s knew her as Jacqueline Piatigorsky

She ably administered the affairs of the venerable Herman Steiner Chess Club, organized events for local players, sponsored international chess tournaments that attracted some of the world’s finest players (including then-current World Champion Tigran Petrosian and later-chess king Bobby Fischer), and was one of the first American organizers to promote programs in youth chess. 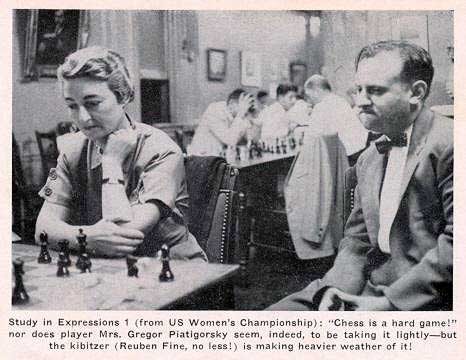 Piatigorsky? Yes, indeed. She was at the time married to the world-renowned cellist Gregor Piatigorsky, a happy, fulfilling, and productive partnership that lasted from their marriage in 1937 to his death in 1976.

Many of us junior players realized that we were in the presence of special people—but just how special few of us imagined.

Jacqueline Rothschild, daughter of enormously wealthy and influential banker Edouard Alphonse de Rothschild, was born in Paris, France, in November of 1911, she being one of a number of heirs to the House of Rothschild, the European banking, and finance dynasty began in the late 18th century.

She and Gregor emigrated to America in the late 1930s, fleeing the Nazi occupation of France. They moved to New York, later lived in Philadelphia a few years, and finally settled in Southern California in 1949.

As a naturalized American citizen, Mrs. Piatigorsky first became an outstanding tennis player, competing at the national level, and then developed an intense interest in rated tournament chess play, rising to one of the top American female players in the 1950s and representing the United States in the first Women’s Chess Olympiad, in 1957.

In the early 1960s, her chess playing strength increased, and she was often ranked in the top ten American female players, on one occasion as high as number two in the nation.

It was to the great good fortune of the L.A. chess community (and by extension the American chess community at large) that her energy, industriousness, and extensive skills were directed to chess organization and patronage beginning in this latter period. Further, and perhaps surprisingly, the endeavors were accomplished with a personal and hands-on approach that belied her aristocratic and privileged background.

Both she and Gregor were highly visible and hardworking participants in many of their philanthropic chess enterprises.

Yet an always-active and artistic temperament cannot allow itself to become focused too long on only one creative outlet, manifested in only one direction.

In the early 1970s, when much already had been done both in and for chess, Mrs. P. (as we familiarly and fondly referred to her—but never to her face) was seized by another passion, that of sculpting. She and Gregor gradually phased out of the chess world, and The Grand Lady concentrated her efforts on mastering the art of sculpture.

It was no surprise to anyone who knew her that she did, in fact, come to excel in this most painstaking and arduous of artistic expression. The first one-artist exhibition of her work was in 1976 (the year of her husband’s death), and it was met with critical acclaim.

She has tirelessly pursued this artistic medium now for approximately 40 years, creating one after another splendid sculpture, some literally months in the making—and several notable pieces in obvious homage to her dearly beloved deceased life partner, Gregor.

As this is being written, and as the Grand Lady productively lives her hundredth year, she still works nearly every day in the converted garage that serves as her studio, in the Los Angeles home on Bundy Drive (yes, that Bundy Drive) designed for her and Gregor by Frank Lloyd Wright, Jr.

But again, that protean creative impulse that first led her to sculpt has sprouted additional branches in these past 40 years, and she has found time to publish two books of her memoirs as well as create an endowment for the New England Conservatory of Music to provide the “New England Conservatory/Piatigorsky Artist Award,” which bestows upon the recipient a cash prize as well as a series of concert engagements.

The truly creative can never rest. And for the best of them, sometimes even one century of achievement is not enough.

One Capsule in the Forest

Prev Next
13 Comments
Leave A Reply
Cancel Reply
Connect with:
Login with Google