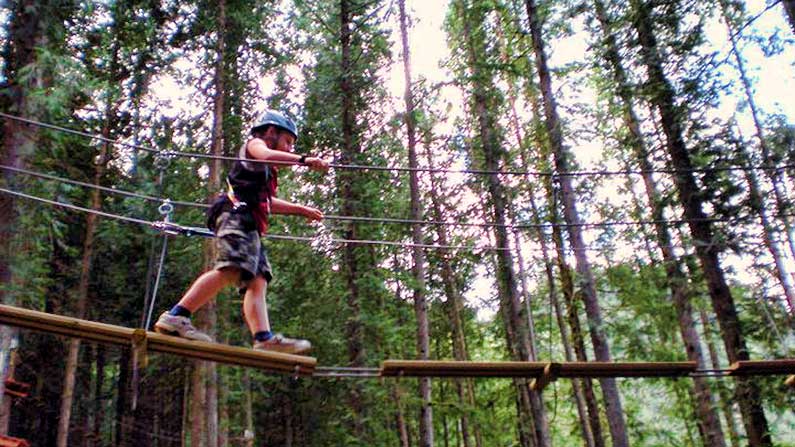 If you had three weeks on the road to create memories for a lifetime, what would you do? – My answer? Almost everything!

Three kids and I, a tent, and an over-packed small car leave Edmonton, Alberta, heading west to Jasper National Park along the Yellowhead Highway on July 2, 2008, following a night of fireworks celebrating Canada Day.

Cabins tucked into the mountainside, Miette Hot Springs mineral water, and buffalo burgers are only the beginning. The Jasper SkyTram, making its seven-minute climb up Whistler Mountain past the tree line, mesmerizes my son, Michael, age nine. He and I hike up, nearly reaching the summit, and I take a picture of him at the snow line, ankle-deep in the white stuff, wearing his shorts.

In Jasper National Park, elk, bighorn sheep, mountain goats, and even black bears wander freely. Bighorn sheep strut across the highway, weaving in and out of traffic without concern. Black bears, more timid, return to the shelter of trees when tourists stop to gaze.

Heading south to Banff along the Icefields Parkway, we stop at the powerful Athabasca Falls, where unusually high water crests over the concrete viewing platforms.

It’s all uphill from there to the snow line, home of the receding Athabasca Glacier. Misty clouds descend from the mountain peaks, threatening rain and fading out the view. We don jackets and hoods in the numbing wind, and snap some pictures before the fog and rain claim the glacier.

In Three Valley Gap, British Columbia, we find affordable six-minute helicopter rides. Did we plan this? Are you kidding? This is an adventure trip. If an unforeseen opportunity jumps out at us from the side of the highway, we don’t turn it down. How many people can say they flew in a helicopter over Three Valley Lake? After the helicopter rides, we’re up close and personal with said body of water as we weave around in a motorboat, driven at top speed by an expert who can tilt the vessel perpendicular to the lake surface.

Between Revelstoke and Sicamous, Michael, tethered by a safety rope, conquers an obstacle course in the trees at Sky Trek, and we put all doubts to rest when we discover that the Tooth Fairy lives in the nearby Enchanted Forest. This area of the Monashee Mountains has a truly enchanted look and feel—the perfect setting for Doris Needham’s lovingly constructed storybook characters and sets to populate.

We descend from the lush coolness of the mountains into the Okanagan Valley, British Columbia’s furnace. The landscape transforms into brown grass with sparser trees. Lake Okanagan, unlike the green, glassy lakes of mountain glaciers, is a spectacle of indigo blue with tufts of whitecaps.

Inspiration for a writer

Paula, 17, finds her muse on the Fintry Queen ferry in Kelowna. Hence, we take a second tour, this one with live music. The Cricket, thus nicknamed for his rapid guitar playing, serenades Terra, 11, at our table.

We stop in The Okanagan Heritage Museum, home to an authentic iron lung once used in polio treatment, enjoy a hayride through an orchard of apples, cherries, and peaches, and finish the day bull-riding Ogopogo, the famed lake monster, on the beach of Okanagan Lake.

We leave through the valley’s desert south at Osoyoos, five kilometers from the Canadian-American border strung behind the peach orchards. Following Highway 3, we wind farther north along the Selkirk Loop, and cross Kootenay Lake in 40 minutes by car ferry from Balfour.

By nightfall, we’re in Creston at the Mountainview Inn, snug and cozy in the dense B.C. mountains. Next door, the Retro Café’s quaint tables of slate add ambiance as the kids reminisce with Rupert the Bear books by candlelight.

After a few unscheduled stops to swim at Lockhart Beach Provincial Park and Tie Lake the next day, the temperature plummets as we approach Sparwood, home of the world’s largest truck, Titan, once used in mining operations and sporting a wheel diameter twice the height of a person.

The Frank Slide gives testament to the 1903, 4:10 a.m. disaster that claimed over 70 lives. Half a mountainside of angular boulders tumbled into the Crowsnest Pass, Alberta, where information signs now stand like grave markers to safeguard the memories of the dead.

Beyond, the mountains collapse into foothills en route to the Cowboy Trail, or Highway 22, where signs warn drivers to fill their gas tanks before attempting the drive.

Three-armed windmills near Lundbreck Falls perch atop rolling hilltops, white doves against blue-black clouds. We return to Highway 3 and head east to spend a day at the Head-Smashed-In Buffalo Jump Interpretive Centre, where we relive the successful hunt planned by a young Blackfoot man coming of age thousands of years ago. The original jump is still there, a five-minute walk from the museum through coyote territory.

Coming out of warp, we dock at the Star Trek station in Vulcan to purchase Spock ears and phasers. In Drumheller, we check the view through the mouth of the World’s Largest Dinosaur and study some hoodoos on the Badlands Interpretive Trail before exploring the Royal Tyrrell Museum and, the next day, the Calgary Zoo.

What would a trip be without camping? We unfurl our tent at Brewers Campground and bake on the beach of Gull Lake for a day, and then surrender to the cold dampness of night amidst darting bats and mournful coyote howls prior to visiting Sylvan Lake in the morning.

An hour and a half from Edmonton, we spend our last night in Red Deer, where another show of fireworks, as if celebrating our homecoming, brings our trip full circle.

Land, water, air; heat and snow; mountain and prairie; city and country; people and animals—all were encapsulated in one non-stop action-adventure tour.

There were a few things we couldn’t fit in. We didn’t take an airplane, we didn’t travel around the world, and we didn’t skydive.

That will be next time.