My guest today is Louis K. Lowy, a new author whose delightfully funny and wacky sci-fi comedy, “Die Laughing”, is coming out this month in eBook versions, and in August for the dead tree version. It’s witty and nostalgic. The action can be brutal at times but is handled with a light comedic touch. A brilliant first novel. If you want something fun and exciting, check out “Die Laughing.” 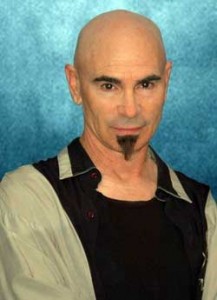 EL: I loved your book and especially Sam E.’s humor and his comic asides. It really spices up the book and created a light, irreverent tone. How did you come up with so many brilliant lines? Are you a stand-up comedian as well as a writer?

LKL: Thank you, Elizabeth, for the extremely kind words. Growing up, I hung around friends who were very witty. To keep up, I developed a knack for one-liners on almost everyone and everything. Being in our teens we thought we were quite clever, but in retrospect, we were just hiding our insecurities. I was channeling that with Sam. Being a stand-up, he’s great at the quips, but as my friends and I, it was a subconscious way to hide his insecurity.

As far as the actual jokes with punch lines, most of them were re-tooled from joke books, or from what I heard throughout my life. A couple I invented. The real difficulty was altering them so they’d be unique to the situation I was writing about. I also wanted to make sure the jokes weren’t attributed to anyone. In other words, I wanted them to be the timeless kind that would have been around in 1956 when the story takes place, and that Sam would – like I did – have taken them and made them exclusively his.

Me, a stand-up comic? Only in my mind. It takes a lot of nerve to go on stage and do what those people do. I’m way too self-conscious for that.

EL: Your book is set in the 1950s and contains many references to icons of that era. Why did you decide to pick this particular period?

LKL: That’s a great question, one I’ve asked myself many times. I think it’s a combination of things starting with my passion for 1950’s sci-fi and horror movies. I grew up watching them before the days of 24 hour TV and DVDs. When one of them came on you had to stick by the TV at the time of broadcast or miss it. I can remember on Saturday’s staying up until 4 or 5 in the morning watching all night monster film marathons and then going off to deliver the Sunday newspaper.

Another thing that attracted me to the 1950’s was, contrary to how most of us think of the era, that it was a very volatile time. It was a watershed decade. McCarthy had his witch hunts going, Little Rock was to become a defining moment in race relations, Rock ‘N Roll was being born and Elvis Presley and the music was considered dangerous to society, and television was starting to change our viewing habits.

Another powerful influence was that the 1950’s was my parent’s era. They were young, vibrant kids in their twenties. I look at pictures of them at that time and I’ve often wondered what was going on inside them during that period. To get back to your question, it was an emotional attachment as well as a curiosity about that period which attracted me to it.

EL: Of all the characters referred to in the book, which one would you have liked to be?

LKL: I’m going to assume you mean the non-fictional characters. I’m divided. Hands down, it would have to be Elvis! The raw energy and animal magnetism he had, not to mention his singing ability and how he and his band altered music forever. Wow!

EL: Without giving anything away, the ending of the book surprised me a little, but it fit very well. Poignant. Did you always have this ending in mind or did you have to wrestle with it?

LKL: I always had that ending in mind, but I had to wrestle with it very hard. After the first draft, I wrote a version with an alternate ending because I knew the original ending was taking a big risk and it might turn off publishers. After much contemplation, I decided I’m writing for myself, not the publishers, and I’m going with my gut. I went with my original ending, and I haven’t regretted it since.

EL: When did you start writing stories and why do you write?

LKL: I’ll answer the second part first because I think that’s the most important. I write because I love it. It’s a constant struggle to come up with good ideas and proper words, but there’s not anything else I’d choose to exhaust myself for. Really good fiction explores truths, and while I don’t consciously think about that when I’m writing sometimes I can look back, and go, oh yeah, that’s what this story is about. It’s an amazing feeling to go into a room and create worlds you wish you were a part of, and characters who are the you that you never were, but wish you could be. There’s no bigger thrill or sense of accomplishment for me.

Now the first part, when did I start writing stories. I’ve always loved literature and had a knack for writing, though I didn’t write stories too much. I play the bass guitar and have spent a major portion of my life in original bands. Nearly always, I was the lyricist for the various groups, so I was always writing, but as I said, not prose. About four years ago I started drifting away from bands. The beauty of bands, and also the bane, is that it’s a collaborative effort. In really good groups the creative vision is elevated by the chemistry and in not so good groups the vision is encumbered. I felt it was time for me to do things on my own and either rise or fall on my face. I took a few writing classes and eventually was accepted into the MFA Creative Writing program atFloridaInternationalUniversity. Writing has become my life.

EL: How do you get your story ideas? How did you get the one for Die Laughing?

LKL: Story ideas come from everywhere, but honestly there is no magic well. A lot of times a good movie or book will spark something. An article on writing might spark something, as will an overheard comment from a waitress. The trick is always to be on the alert, walk around with open senses and be receptive. A discarded store receipt may be a potential story.

The idea for Die Laughing came about thanks to three Japanese girls and a story generator I was given one time in a writing class. The generator is a sheet of paper with three columns, each with twenty-nine rows. In the first column, there are different characters listed, in the second column there are different goals, and in the third, there are different actions. The idea is to pick three random numbers, look on the sheet and see what comes up and then write about them. I was fiddling around for a new story, and I asked the Japanese girls, foreign exchange students visiting with my son, to pick three numbers with the idea that I’d try the generator. They each said seven. On the character column, seven was a stand-up comic. I didn’t like what the other two columns said, so I ignored them. That’s how Sam was born. The rest, as I said, was all about my love of 1950’s sci-fi movies and my fascination with that era.

EL: In the story, the aliens are after our planet’s oil supply. Was there a message you wanted to convey through the story?

LKL: I was aware of the dual relevance, that’s for sure, but at the same time it was about conveying the 1950’s sense ofAmericaon the move and our growing love for cars, and in turn the oil that required them to keep running. During that period people were moving from the cities to the suburbs. Drive-in diners, shopping centers, and motels were springing up to accommodate the growing mobility. Oil was important, just as it is today.

EL: When you sit down to write what are the first three things you do? What kind of environment do you need for writing?

LKL: I’m very much a regimented writer. I write a minimum of two hours a day, six days of the week. The first thing I do is make a cup of hot tea or coffee to take with me to my office, which is really a playroom of sorts with my shelves of books and action figures, and my walls lined with movie posters. The second thing I do is note in my writing log the date and starting time. I don’t cheat on my two hours, if I leave for ten minutes, I add ten minutes to my time. The third thing I do is the hardest, I concentrate. It’s important that I think about my story and characters and try to get as much as I can of that (which may next to nothing) on the page during that particular session. The only way to do that is to concentrate, which can sometimes be difficult because your mind plays tricks. It’s easier to not concentrate, so if you’re not vigilante you’ll come up with a thousand distractions. That’s really it. The rest is just to keep at it.

EL: There are many people out there who want to become published but are never hit by that lightning bolt of acceptance. How did you finally succeed?

LKL: This is a simple one: commitment, perseverance, and a belief in you. If you have those things, you’ll work to keep improving your writing and to develop a game plan for getting it published.

EL: What are you working on now?

LKL: I’ve been very lucky. Of the ten pieces in my short story anthology, eight have been published. One of them has been sent to The Best American Mystery Stories for consideration. I’m trying to get my short story collection released as a book. I’m touching up my second novel, Pedal. It’s a complete turn around from Die Laughing. Pedal is the story of a forty-nine-year-old fired music teacher who’s struggling to get her life back through bike racing. Currently, I’m working on a third book. It’s a sci-fi story that flips between planets, characters, and time. The working title is J-5.