Dellani Oakes: Lone Wolf is set in the year 3032 when humans have conquered long range space flight and have settled into many parts of this and other galaxies. Hovering in space far from civilization, members of the Mining Guild, Marc Slatterly & Matilda Dulac, wait for their miners to return from the planet they’ve been working. Unbeknownst to them, one of their miners has harvested Trimagnite, a toxic and volatile liquid ore. Exposure to Trimagnite causes madness and death. Their ship isn’t prepared to handle this load.

Enter Wilhelm VanLipsig, the Lone Wolf. He is assigned by the Mining Guild Commandant, John Riley, to pick up the ore and carry it back to the Mining Guild home planet. He and Marc have a history, apparently one ending in violence. Despite this, the two men agree to work together with Matilda in order to track down the villainous Commandant Riley before he can wreak havoc on the galaxy.

Pat Bertram: How long had the idea of your book been developing before you began to write the story? 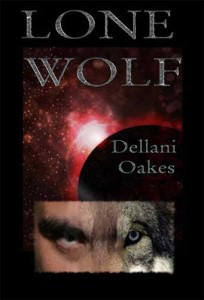 Dellani Oakes:The characters were in my mind many years ago. The idea for the three main characters of Marc, Wil and Matilda came from a role playing game my husband and I played. I had originally set out with the idea of recording their adventures in game, but that changed almost immediately. The characters took on a life of their own and insisted on telling a different story. What they came up with is far better than what I had initially had in mind.

Pat Bertram: What inspired you to write this particular story?

Dellani Oakes: As I mentioned above, the idea came from a “Traveler” game we played back in 1982. However, the characters apparently thought that scenario rather lame and came at me with other ideas. I like theirs better.

Pat Bertram: How much of yourself is hidden in the characters in the book?

Dellani Oakes: Matilda is a lot like me in some respects. Her fierce devotion and the way she takes up for those she loves is totally me. Oddly enough, some of the aspects of Wil’s personality come from me as well. Mostly, he and Marc mirror aspects of my husband’s personality.

Pat Bertram: Tell us a little about your main characters. Who was your favorite? Why?

Dellani Oakes: Of the three main characters in “Lone Wolf”, I love Wil the most. I’m very fond of Marc and Matilda, but Wil stole my heart the minute he walked through the airlock. He’s smart, sexy, handsome, wicked and not scared of anything. He always has a contingency plan and he’s easily the most paranoid character I’ve ever created. His paranoia keeps him alive and one step ahead of his enemies. As long as he’s lived, that’s quite a feat.

Pat Bertram: Who is your most unusual/most likeable character?

Dellani Oakes: I think that Caprilla Mayeese, the enormous Fellician warrior is the most unusual and likeable. Fellicians are giant cat people who speak and walk upright. They are almost all mercenaries and fight like no others in the galaxy. Caprilla is the leader of a small group of mercenaries, all Fellicians. He’s about eight feet tall, with sleek black fur and penetrating blue eyes. He’s got a quick wit and a wonderful sense of humor. He’s also loyal to the death and will gladly kill anyone who gets in his way or threatens his friends.

Pat Bertram: How long did it take you to write your book?

Dellani Oakes: “Lone Wolf” took a few months to write, but far longer to edit and perfect. It was one of my earliest novels and it took me awhile to get my style down. I didn’t really figure out what I was doing until about the fourth book in the series, so each of them requires a lot of perfecting. Now, I can sit down and write a book that’s close to finished with the first draft.

Pat Bertram: How much of a story do you have in mind before you start writing it?

Dellani Oakes: I had quite a lot in mind when I started to write, but the characters took me in a totally different direction. I can honestly say that absolutely nothing in “Lone Wolf” was in my mind except for the three main characters. What’s on the page came from Wil, Matilda, Marc and the others telling their story in their own way.

Pat Bertram: Did you do any research for the book? If so, how did you do it? (searching Internet, magazines, other books, etc.)

Dellani Oakes: It’s hard to research something set so far in the future. Since I created my own worlds and locations, I didn’t have to study maps or anything like that. However, in order to get the Mining Guild and Galactic Marine ranks correct, I had to do some research into military rank. Most of my research is done on-line as it’s the most easily available. Thank got for the Internet!

Pat Bertram: How do you develop and differentiate your characters?

Dellani Oakes: The characters delineate themselves. I come up with a body for the slot, give it a name and it develops its own personality and characteristics. Even minor characters speak loudly wanting a name and an occupation. Some of these seemingly unimportant people later become major players in the series. One character in particular that comes to mind is introduced in book two, “Shakazhan”. I thought Dr. Stanley Savolopis was unimportant, merely a cog in the corporate wheel. By book three, “The Maker”, he’s a main mover and shaker.

Dellani Oakes: Writing comes very easily for me. The ideas come faster than I can get them down, which is why I have so many unfinished stories. I’ve learned to work on one until the ‘muse’ grows silent, and move on. I come back and work on each story a little at a time until it’s done.

Other stories come to me all at once and I write until I’m finished. One in particular I think of—I’d finished my NaNoWriMo (National Novel Writing Month) project early and got the idea for an entirely different book. I started it Thanksgiving afternoon and finished four days later.

Pat Bertram: Have you ever had difficulty “killing off” a character in your story because she or he was so intriguing and full of possibility for you, his or her creator?

Dellani Oakes: I greatly dislike killing a character and avoid it if I can. However, there are times when a character must die to advance the plot. The one who upset me the most was a guy named Murdock Pickford. He’s in a prequel to my sci-fi series. Murdock is a nice guy. He’s kind, capable, loving and forgiving. He’s engaged to a woman who’s pregnant with another man’s baby & he agrees to raise her as his own. He’s thrilled about the baby, excited about getting married—and he has to die, horribly, brutally, for the book to move forward. I’m not ashamed to admit that I cried when I had to kill him off.

Pat Bertram: Do you have mental list or a computer file or a spiral notebook with the ideas for or outlines of stories that you have not written but intend to one day?

Dellani Oakes: I’ve got a list in the back of one of my notebooks with story ideas that one day I might get to. Let me finish the 54 novels and short stories I’ve got pending before I take them on. (Gosh, didn’t realize it was so many. Kinda sorry I counted them up.)

Pat Bertram: How many stories do you currently have swirling around in your head?

Apparently 54, cause that’s how many are unfinished.

Pat Bertram: Have you written any other books?

Dellani Oakes: I have one other published novel, “Indian Summer”, also available from Second Wind. “The Lone Wolf” is the first in my sci-fi series. I’ve written six books in the series so far & am working on a 7th. Finished books not in the series—27 and probably 20 short stories.

Pat Bertram: Where can people learn more about your books?

Dellani Oakes: My novels are available through my publisher, Second Wind Publishing at www.secondwindpublishing.com “Indian Summer” and “Lone Wolf” are also available at Amazon.com where it can be purchased in paperback or Kindle format. The books are on Smashwords and a variety of other websites.