This week, Vitabu Books spoke to Benin-born writer Eberekpe Ogho Anthony Whyte. In his introduction on his website, he describes his mother as being “difficultly religious. “

As a child, Eberekpe says he often wondered whether she was a “miserable angel from wretch heaven…fooled by the Cherubim and Seraphim Sect with a poor white flowing robe, and an elongated square cap with a cross tailored above it.” 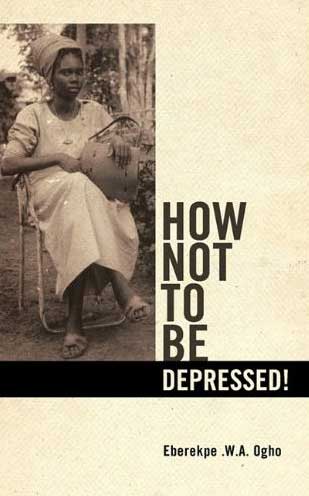 Whyte saw his father as more pragmatic: “an artist who enjoyed life to the fullest and never a time forgot his ancestral heritage.” EW thinks he inherited his creative flame from both parents: One who believed God is everything and the other in the everything called God.

Vitabu Books: You also describe yourself as a writer with an edge. Why?

Eberekpe Whyte: The person who made that statement is Bunmi Fasehun. She’s a poet and the publisher of Le Chics. She also happens to be the designer of Eberekpe Whyte dot com, having gone through some of my works. I did not use her conclusion as a tag; I just thought it was a compliment from a fellow writer worth keying into.

Would I really want to consider myself as a writer with an edge?

With all humility, yes! Simply because I write from the heart and I want readers to feel the words and experiences, not from the writer’s perspective, but from their own experiences and aspirations. In a way, rather than write, I allow my works to speak to the souls of the readers.

Vitabu Books: What inspires you to write books?

EW: Generally, I think the inspiration for my works—written and yet to be written—comes from my day-to-day life, society, the environment and behaviors of human beings. I love politics and religions; I think they are the two most controversial subjects in the world. Somebody might say ‘ philosophy’, but I think it is the philosophies in both subjects that make both to be controversial in attempting to define truth as it should relate to human existence. Perhaps it is my search for that truth that forms, sometimes, the inspiration for my works and the need to see how the discovery of that truth can address the battered human condition.

Do I really get different inspiration for each of my works?

I think inspiration has no facet; it all depends on the kind of mood I find myself at that particular moment and the prompt available for me to write. As for Number Tense Dawning Strict, I wanted a laugh and I needed something that would spark off that laughter. I realized at that point in time that political fit Britain was in was a good reason for a good and long laugh. Number Tense Dawning Strict is a satire that mirrors the British political system and in a way the entire western political class. It shows that irrespective of where we come from, we all are political animals. I also wanted to show that there is no difference between the politician in the western world and that on other continents—each suffers the same fate of animalism and desperation in other to achieve power and the electorates are no less different. While one is a product of diplomatic and hypocritical violence, the other is a robust show of physical violence.

I remember when I was researching for the book, I went onto the streets to ask some ordinary British citizens why they would want the then prime minister, Gordon Brown, and his Labour Party ousted from office. Some of the answers I got were as ridiculous and stupid as the ethnic divides that define the politics of Africa.

My other work, Abule Oje—-also a political satire, but this time a play—was born out of my concern for the continent of Africa, using my country [Nigeria] as a yardstick; as a directionless situation where anything goes and nobody is held responsible or accountable for whatever wrongs that are committed. Especially when the late attorney-general, Chief Bola Ige, of Nigeria, was assassinated. To this day the killer[s] are still hiding somewhere amongst us. Abule Oje was actually inspired by the oratory of Wole Soyinka at the funeral of the attorney-general.

Other of my works have been inspired by my deep love for a subject or, my dislike for it; to see that the issue is resolved for the benefit of all. For example, my play, Baby Ps, came about as a result of my love for children. When, in Britain, a 17-month old baby, Peter, was tortured and eventually murdered by his mother and her boyfriend, and it became an international issue, I felt then was the time for me to address an issue that has always been worrisome in my heart. Baby Ps is a blend of children being tortured and abused in the western world and the Africa continent.

Songs of Hearts is a collection of poems that addresses human failings and the hope of victory over these failings. Sacred is poetic prose, a biographical work on T.B. Joshua of Synagogue church, Black Britain is about the journeys of immigrants outside their native countries; The Ink, My Pen was my first attempt at publishing. I think it suffered a terrible editorial fate, but it was nevertheless a play like Evwri El-Rustic in their attempt to address societal ills.

Vitabu Books: A “terrible editorial fate” sounds pretty ominous. What do you mean? How can a writer avoid it?

EW: You have written your work, you are satisfied with what you have done and you forward it to a publisher. The work is eventually published and you have it in your hands. [Then] you suddenly realize there are some creations which ought not to be there and words that should never have been used, but there is nothing you can do about it. So, avoiding these errors will depend on the publisher.

Is there is a willingness on the part of the publisher to go through the work with a professional eye to arrest these errors or is he just there for his money?

There is the need to go through the work as much as possible or be prepared to pay hugely for the errors to be attended to. But again, no work of art is perfect. While creativity is good in itself, it is a strive towards artistic perfection, which is why revisions are always an open option.