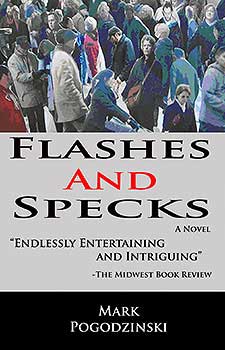 A novel unlike any other I have ever read. This truly unique and intriguing book tells the story of Henry Kent, a math teacher who has a kid with strange hobbies, a wife who can’t stay at home, and fellow teachers with issues. But that is not what the book is about at all. These characters are just placeholders. Similar to the photographed cutouts of people that Henry’s son Arthur makes for his city created of milk cartons and tape, down in the basement.

This book is about much bigger issues than the people who create or participate in them. It is about school bullies, religious cults, relationships, death, the end of the world -all the things that tend to keep us up at night. In fact, this book disturbed me just enough that I knew better than to read it at night. I would only pick it up in the mornings, when my mind was fresh and ready for the emotional battle. I consider this high praise for a book to be able to set fear in me, without resorting to horror or gore. “Flashes and Specks”is written in 35 episodes. Each one is a cliff hanger to make you want to read the next one. There are definite references to comic books and superheroes and villains. So that could be it. Or could it be like episodes of insanity? Short bursts that ebb and flow when someone has not taken their medicine or when the world becomes too much to bear. This is very likely too, as madness was settling in on many of the characters.

All I can say is that “Flashes and Specks”made me think, and made me want to read it again
─ April Sullivan for Reader Views

It all started at the funeral breakfast. He was aware of it in the corner of the restaurant among the whispers and the clinking of coffee cups. He knew that he was fated to do something to help the world, combat evil, right wrongs, a childhood dream that never left his mind. It never died as so many of childhood’s visions do. It clawed and scraped to remain alive, convinced of its own truth and justice.
Henry’s cousin had killed himself. His family called it a tragedy and for the best in the end. Carter was different, but Henry liked him because he was honest when he was alive. Carter was the wild one, the artist without art. To Henry he was humorous, making fun of the adults, talking back, swearing at them. He told people what he thought, what he believed the plain facts of life, the right and wrong of the world.

Henry was only thirteen when Carter slit his wrists and walked about his house, dripping blood on the carpet. His mother found him in his bed, his body white and pale in the evening gloom. Henry thinks of the scene from time to time, the horror of it. The image haunted him for months as a child, and even after his own son was born. It creeps in now and then, and is still horrible.

Henry knew Carter had attempted suicide once before. Carter had told him the story and was even proud of the scars, the white marks along his arms. He told Henry that when he first saw the blood he was terrified. Henry was sure that he wouldn’t try again. It wasn’t good to kill yourself. They talked about it, Carter confiding in his younger cousin, explaining the pain and the reasons why, the daily anguishes of his life. The cousins talked over comic books, both collecting and sorting after weekly trips to the local store. Carter often related his experiences to the characters in the colorful pages. Henry was happy to know that his cousin had decided to live.
And then he was gone. Henry tried to put the pieces together and solve the mystery of the sudden change. He was immensely and profoundly sad.
The funeral breakfast seemed to drag on, time slowing down for the family to gossip and mourn. Henry had just finished a piece of toast when it happened. He wasn’t hungry, but his mother told him the food was paid for and he should eat, so he did. His mother was sitting next to him, speaking with a distant relation who also sat at their table. Carter was the subject of the conversation.
“He was too emotional,” Aunt Barbara stated.
“Well, I’m not sure it was that,” Henry’s mom responded.
“Oh, it was. His parents should’ve watched him,” Aunt Barbara continued.
“I think they did the best they could,” answered Henry’s mom frankly.
“I told his mother he was dangerous,” Aunt Barbara said pointing her fork at Henry’s mother.
“No mother wants to believe that about her child,” Henry’s mom said.
“I told her,” said Aunt Barbara as she shook her head.
“In the end he only hurt himself,” said Henry’s mom… 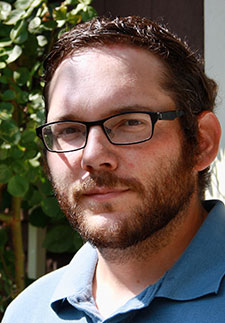 Mr. Pogodzinski is also the author of several novels including Flashes and Specks, The Ceremony of Innocence, and the upcoming The Valley of Ashes.

He was awarded The Master Teacher Designation by New York State and is a member of the Western New York Writer Fellows.

Mark holds a MS in English Education and teaches high school in a suburb of Buffalo New York.

He lives in Buffalo, New York with his wife and their two dogs.  He and his wife will be welcoming their first child in December of 2013.