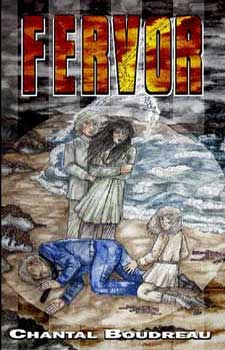 By Ursula K. Raphael
I first came across Chantal Boudreau when I read her short story, Palliative, in the anthology, “Vampires, Zombies and Ghost – Oh My!” I was very impressed, so when she asked me if I would review her novel, Fervor, I agreed without hesitation…but when I received the book in the mail, and I read the jacket description, I regretted saying yes before learning more about the storyline. Even as I write this, I am not sure if Fervor is YA fiction, or not.

I think this tale about children with bizarre talents, abandoned on an island with no adults, would appeal to fantasy readers of any age, from grade school and up. The plot centers around one “house-family” in particular, consisting of a Teller, a Fixer, a Keeper, a Watcher, a Finder, and a Control, and the story is told from the POV of the Fixer, Sam. Francis, the Teller, explains to Sam that the children, Bigs and Littles, can now communicate with their minds through “the connection.”

As Sam meets the rest of their assigned group, several of them begin to question the secrecy surrounding their new psychic abilities, as well as the loss of some of their other senses.

As much sci-fi and fantasy as I read, I am always reluctant to read a novel that mixes the two genres. Sometimes the author blends the two together well, and other times an author creates an abomination that makes me want to claw my eyes out. Fortunately, Boudreau tempered the mix with a good dose of mystery. Each chapter led me further down the rabbit hole – the scholars’ experiment on the island of Fervor. I was so desperate to find out what was behind “the Directives” given to all the house-families that I blew off my daily schedule in an attempt to read Boudreau’s novel in one setting.

What really stood out about the author’s writing style is Boudreau’s talent for fleshing out her characters with incredible detail. I immediately began forming opinions about all of them…and, more often than not, I had misjudged them. It’s a nice change to be surprised by the characters, rather than have them be predictable.

The depths of their relationships were amazing, but believable, as Sam mentions the months and years that pass throughout his narration, so their unique situation was not hard to imagine.

Abandoned and scared, but less alone than he could have ever imagined, Sam awakens to the screams of the other children on the island of Fervor, and the absence of all adults. To make matters worse, despite hearing this chaos in his head, he finds himself deaf to the normal sounds around him.

His only answers are now being provided by a strangely charismatic boy named Francis who is about to lead Sam to a gathering that will alter his life. Why have things changed so drastically on the island, who is responsible for these changes, and what does this mean to the remaining inhabitants of Fervor?

“Why are you here, Francis? Why are you taking me there? What is a Teller?”

Sam wanted to keep it simple and ask only one question at a time, but he found that the thoughts were all tied together, and he could not separate them. It was not as straightforward as talking, this connection. It was difficult to limit what you were thinking at someone.

“That’s going to take a lot more explaining than you might imagine. Let’s get you ready to go, and I can give you some of the details along the way. We have someone else that we have to stop for who will be coming with us to the Hub. She’s a Little like you. She’s not that far away. I can introduce you now, if you like,” Francis suggested.

The older boy’s eyes went vacant, as if he were staring off into the distance, but that distance lay beyond the confining and bare walls of Sam’s room. “Sarah? Sarah, are you still there? I’m with Sam, just like I told you that I would be. We’ll be coming for you soon.”

“Francis?” Sam could barely make out the girl’s thoughts, like he was eavesdropping on a private conversation, and only because the older boy was allowing him the privilege. Her thoughts were even more tremulous than Sam’s. “I’m scared. It’s so dark, and I can’t move without bumping into things. Are you sure Sasha won’t be back?”

“She won’t be back, Sarah. She’s not on Fervor anymore. Stay where you are. Sam and I can’t be your eyes for you until we get there. We’ll be leaving here soon. Sam just has to gather his things.” Francis’s thoughts always seemed so self-assured, like he had done this before, like he didn’t have the same kind of questions that Sam and Sarah had. That in itself bothered Sam.

He felt the mental tendril extending towards him from the girl, hesitantly. There was something softer and more fragile to the touch of her thoughts that was not there when Francis spoke to him via the connection.

“You’re going to help Francis to be my eyes? You can see like he can?”

Answering Sarah was much different from answering Francis. Francis was right there, and the older boy kept his mind wide open to him. To reply to the girl, Sam had to push his thoughts through a tunnel of sorts, a flimsy tunnel that kept out some of the commotion so that they could hear each other specifically. Her own fear made Sam’s feel insignificant. He wanted to make her more comfortable.

“I can see, but I can’t hear anymore, except through the connection. Don’t worry. I’ll help Francis to find you, Sarah. You’ll be safe soon.”

Sam was not sure why, but he honestly meant that. He was fairly sure he knew exactly where she was, and that he would be able to take Francis to her… 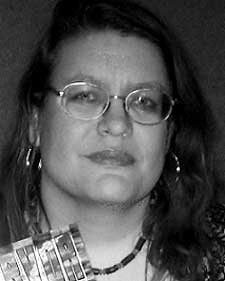 Chantal Boudreau is an accountant by day and an author/illustrator during evenings and weekends, who lives by the ocean in beautiful Nova Scotia, Canada with her husband and two children.

A member of the Horror Writers Association, she writes and illustrates predominantly horror, dark fantasy and fantasy and has had several of her stories published in a variety of horror anthologies.

Fervor, her debut novel, a dystopian science fantasy tale, was released in March of 2011 by May December Publications, followed by its sequel, Elevation, in December of 2011.

Magic University, the first in her fantasy series, Masters & Renegade, made its appearance in September of 2011 and its sequel, Casualties of War in 2012.

Casualties of War
(published by May December Publications, June 2012)

Pieces of Magic Part 1 of 2:
Union of Defiance

Pieces of Magic Part 2 of 2:
Chasing the Node