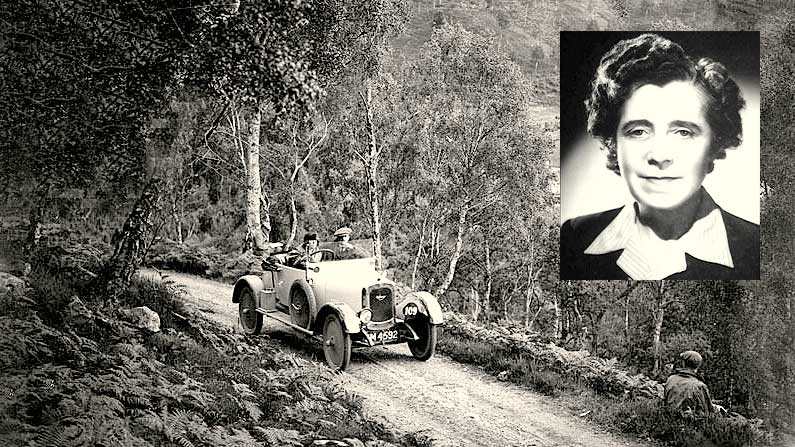 Despite revolutionary scientific discoveries by women, over the ages, the world of science remains institutionally sexist. High grades in university seem hardly to influence the loss of talented women in science.

Promotions of women scientists occur less frequently, while they are structurally paid less than their male colleagues, and win fewer grants. The first part in this series is dedicated to pioneering automobile engineer and businesswoman Dorothée Aurélie Marianne Pullinger, MBE (1894 – 1986)

As the men return from the front after the end of The Great War, women leave the factories and laboratories to return to their households and former positions. Dorothée Pullinger, daughter of an automobile designer, had been in charge of seven thousand women in an aircraft and ammunition factory close to Glasgow.

She managed to convince her superiors that, as large numbers of women had learned to drive a car, the time was right to build a women-car.

The Galloway 10/20 HP was the first car with a standard mounted retro visor and lacked protruding handles and pedals that could ruin a woman’s skirt. But, above all, the first car where women, averagely smaller than men, could look, instead of through, over the steering wheel to see the road. A car for women, designed by a woman, and made by women that, for this special project were dragged out of their kitchens again.

Dorothée trained under her father at the Arrol-Johnston car works in Paisley. During WWI, Vickers employed her as their Lady Superintendent in charge of 7,000 female war workers at Barrow, where she set up their apprenticeship scheme. After WWI, she became a director and manager of the Galloway Engineering Ltd company in Tongland, Kirkcudbright, staffed by women.

During WWI the factory had been supporting the war effort, as had the Heathhall factory in Dumfries. Renamed Galloway Motors Ltd, the factory produced the car she had remodeled for women – the Galloway (10/20 CV, 4 cylinders, capacity 1528 cc.) based on the Fiat 501.

This was the first-ever car designed specifically for women and it is still the only one to go into general production on that basis. It remained in production in a variety of versions until 1925, and then as a ‘badge-engineered Arrol-Johnston from 1926 to 1929.

She relocated to England with her family and worked as a sales representative for Galloway. Around the time Arrol-Johnston ceased production of cars, she set up a large, technically innovative steam laundry in Croydon, with imported American machinery and its own power station and arterial well.

In WWII she set up the women’s industrial war work program for Lord Nuffield and ran 13 factories. She was the only woman on a post-war government committee formed to recruit women into factories.
~ Source: Scottish Engineering Hall of Fame