What is your Name?

That simple question came to me as I went to visit a friend of mine and as custom demanded I had to go in to see the grandmother. As I knelt traditionally to greet she placed a hand on my shoulder and asked my name. I gave it to her.

She smiled and peered at me, saying the name sits well on me and hoped that my surname will be fulfilled in material particular. A third friend who came with us was a bit nervous as she had English names and she hesitated before giving it. We knew the reason why she was reluctant to give her name to the old lady.

The Yoruba like most other tribes in my country are particular about the name you bear. It is a long process and carefully thought out. The parents would have been watching and observing events around them while the child was in the womb.
Names sometimes describe events, like a child that is the cause of a reconciliation between two warring families or even internal wrangling would be called amongst other names ‘Omolaja’ (Child has settled the rift’) 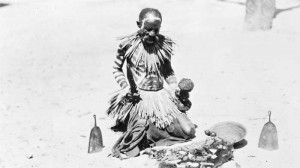 You do not attend a naming ceremony empty- handed. You must come with a small gift for the child. On the table will be the following amongst other items:
Kola nut which signifies that the prayer for the child to be wise and strong as kolanut is used only in important events involving royalty.
Honey: we say honey is sweet and the child’s life is going to be sweet, In essence may all the good things of life fall ripe into the destiny of the child.
Salt never goes bad we say and so the child’s life will never go bad.
A diviner is usually called in early, about dawn on the eight day to determine the path of the child and the name the child has brought from heaven.
Some children have names that they have brought from heaven so those names are seen as automatic names. These are names for twins, (Taiwo & Kehinde) the one that comes after the twin (Idowu) and the one that comes even after that!(Alaba).

We have love names, (Aduke) that is names signifying affection and then the real name, which the diviner would be asked to do at dawn before guest start to arrive. The father has already a list submitted to him by his father, his grandmother, and then his own names and the mother is also asked to bring her own name for the child. All guest invited who want to name the child must be ready to dip their hand in water, pray and then give a name.

Parents in the old days adhered strictly to these format and today they feel strongly that we have eaten unripe fruits and so our teeth is on edge with all the foreign names we have taken on to show how civilized we had become!
What is in a name? Plenty! Our names tell stories of the family fortunes, trials and more. A name can be a prayer, a supplication, a profession or class caste identity. Some names indicate what happened during birth. I breech birth is automatically called “Ige’ and such children are regarded with some awe and it is assumed that such children are tough. Then we have a child who comes into the world with the placenta wrapped round its tiny fist, such children are called ‘Aina’
We are a highly spiritual tribe and believe strongly in reincarnation and so you find names signifying the return of loved grandfather, father, or some such relation indicated in the names as Babatunde, Iyabo, or Yejide the list in by no means endless.
There are also names given to children of the supernatural world who have come to torment their parents by repeated births, Such names as ‘Durojaiye’(which is a plea to the child to please wait to enjoy the world) and more.

A child was thus usually asked to remember his name and the home he comes from.
It is only an illegitimate child that will point to his father’s house with is left fingers also meant you have not answered to your name.

My name is ABIOLA, which means I have brought honour, I come from a family that produces the prime minister in my town so any member of my family is thus expected to act with restrained dignity and integrity as my family lineage is the OLISA. My mother thus salutes me as ‘omo olisa, oteru oba ode.. and the panaegyric goes on until I show appreciation by touching her clasped hands. The essential lesson in this we are conscious of the value of our name and this value system helped us in the past to answer truly to our names. Commerce, hunger and a suspect civilization has changed all that now.

Excerpt: A Dream of Death Forgotten