What Constitutes Humour These Days?

In the United Kingdom back in the previous mid century, humour was a mix of slapstick and double entendre, raw humour unfettered by politically correct constraints, unlike today.

In my childhood I looked forward to the weekly Goon Show on radio, starring the brilliantly surreal Spike Milligan, Harry Secombe, and the absolute master and my personal favourite – Peter Sellars.

Then when television took over, we all laughed out loud at shows by British comedians like Dick Emery, Franky Howard and Spike Milligan once more with his ‘Q’ series, Benny Hill, Eric Sykes and the Monty Python team, Les Dawson and Morecombe and Wise.

Then things changed as British humour went through a metamorphosis at the direction of po-faced individuals with absolutely no sense of humour whatsoever, shifting its direction towards cringe worthy television programmes like “The Office”, pathetically attempting to ape American humour, which is where British humour is still today. 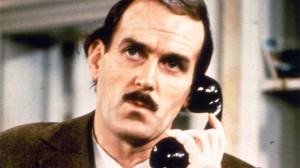 On the 19th of September 1975, the last example of a truly hilarious comedy series to come out of this country first aired on BBC2. I give you “Fawlty Towers.”

Co-written by John Cleese and his then wife Connie Booth, Basil Fawlty leapt onto our television screens alongside his wife Sybil, played by Prunella Scales, the only person Basil is truly terrified of.

In each episode Manuel was the target of Fawlty’s insanity and rage.

Who can ever forget the episode when Manuel kept a rat as a pet, only for it to escape and turn up inside a fresh tin of biscuits on offer to Basil’s guests at dinner – pure comedy genius?

There were only ever twelve episodes made, each one a priceless gem. If only it were possible to return to real humour like that again. These days I watch the various comedy shows in the vain hope that it may raise a titter.

For I am Troubled in my Sleep and Cannot Rest