In September 1995 I was in the part time film program at Ryerson University, where I learned how to shoot with the Bolex and Scoopic cameras, all antique cameras to this millennial generation.

By 1997, I then dropped out because the student loans from the banks came calling. In 1998, somewhere by chance, through an area chiropractor, I directed four thirty second spec commercials, one of which made it to Canadian Television. Yes, I passed the Triggerizer commercial around to the big boys/girls of Toronto commercial making world, but they wanted more.  Yes, only the wretched know the horrors of guerilla filmmaking! 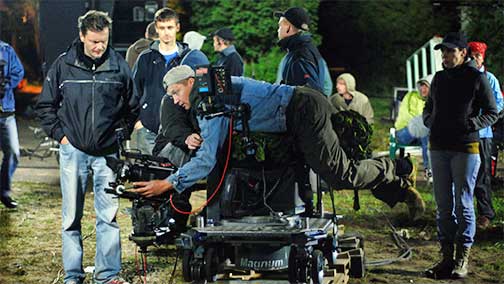 This success, however, led me to team up with a then friend and we had a weekly business radio show called the Enterprise Toronto Radio Show, which aimed at small business, medium business, or large ones.  Imagine going to multiple convention shows and pitching a radio show to every booth–that’s how you get advertisers on a mainstream radio station in Toronto.

This led us to have the who’s who on the show that ran from June 2000 to April 2001. We had the Irwin Toy Brothers, the late Sam Sniderman, who founded Sam the Record Man and former mayor Mel Lastman. We even went to media events, rubbing shoulders with William Shatner and Sir. Richard Branson.  Heck, I even wrote about the person who I had this experience with at this link.

All and all, this episode in my life was all good but I wanted to attract clients interested in hiring us to make TV commercials, or at least for myself to make a career out of such an endeavour.  After the radio show ended, I teamed up with a social worker friend and we filmed a 35 minute documentary on youth violence, calling it Just Talk. Its world premiere was at the Final Cut Short Film Screenings DJ & VJ Sets in the city of Brighton England.  Because I didn’t own the right camera, had to make tremendous amount of sacrifice to film, and lacked money, I left film making for good. From 2003 onwards I worked as a member of the film crew and on the side I wrote some sci-fi books and articles. And that was that.

Zap to 2012. I go to Sheridan College, west of Toronto, where I take a First Assistant and Second Assistant Camera Course which lasted for two weeks. At this juncture, I see the latest movie making systems and gizmo gadgets, including 3D cameras, all user-friendly too.  Eventually, I learned everyone shot on point and shoot cameras, transferred their footage on to a lap top, and edited their work on final cut pro.  When I directed the Triggerizer, I had a huge Betta electrical camera which came with a camera operator. It took 18 hours to film the Triggerizer and 8 hours to edit at a high tech editing suite.  How much did it cost to film a TV commercial in 1998? 8,000 to film it on one day, 2,000 to edit it in 8 hours. Another $2000 went to pay for a two week rotation on CP24, a major Canadian network.

Zap to 2013.  I use a $150.00 point and shoot Panasonic SZ 30 MB camera. I film for three hours a sketch in Toronto Central Library, where I did get permission to film. I film the ending in a North Toronto store. I then take the same camera and spend 3 three hours shooting another sketch in another location. On another day, I get access to an area business and use a Sony full HD 1080 Handycam and film for 3 hours and come up with footage for a No More Deportations to Iran PSA.

After the filming, we go and edit the work on an Apple computer which is equipped with Final Cut Pro software.  Then we have three spec commercials to add to my demo reel.  Ten years ago this would be unthinkable, because it would be cost prohibited, and the technology was not then user friendly, as it is now. This proves that past successes are no longer flashes of regret but today’s possibility. Oh, that was deep!  By the way, I am taking this latest success to the big boys/girls of Toronto commercial world next week.  Wish me luck!