Reading the words, “The State of the Union,” tends to seal our knowledge, knowing how difficult it has been, and will be, to heal America.  “We will fix this,” when the House only showed slight agreement concerning two points, standing twice during the speech.

Not to take you off track, but one especially rude gesture came when the leader of the House never acknowledged the woman, who waited in line for six hours to vote, who was 102 years old.  Everyone stood, while stern-faced, he remained seated.  This is exactly what is wrong within our Government.  We have far too many egos walking the streets of D.C. 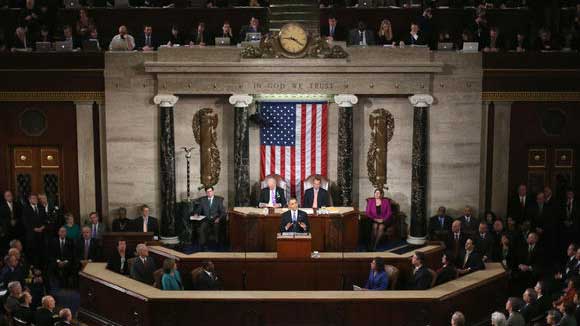 The speech was filled with familiar topics as the President went over his agenda.  President Obama

was relaxed and comfortable with his plans for America.

Some responders, following the speech, thought it was more like a speech given by someone running for election.  Perhaps they were right, since the House has not budged, and they are the ones to support the bills, to get America moving.  If their egos come first if their people behind the scenes take precedence over the people of America, nothing is accomplished, and this has been the stand of the GOP in prior administrations.

The room did become louder when the issue of Gun Control was mentioned, and again when the topic of immigration reform took the stage.  The President invited families of those who were killed by the use of guns, he promised them a vote.

CNN has a wonderful way of reviewing the words of the President with their focus groups from different areas of the country.  The first group was asked, “Do Americans feel he is taking us in the right direction?”

The poll numbers before the speech were 53% positive and 22% negative.  The poll numbers after the speech, 71% positive.  They believed the President gave a bi-partisan speech, and Gov. Rubio was thrown off topic with his prepared speech, commenting for the GOP.

Several past Presidents, because of different circumstances, stayed focus on the issues of the day and pulled toward the middle with the understanding both sides have to work together.  Unfortunately, the other side of the room showed little if any enthusiasm, as they played the old boys club game, over, and over, again.

Obama mentioned the families of gun violence need a simple vote on a key issue involving guns.  The head of the NRA

, following the speech, did not agree with background checks.  The reporter asked him why he changed his mind, when background checks in prior talks, he approved, now he was taking another stand on the identical subject.  He had no reason.  Why would the NRA oppose a national gun record?  I began to think about how our health records, more personal than the issue of being a gun owner, are open and free for others to investigate.  The President of the NRA said, “What about the amendments, shouldn’t they be upheld?”  I often thought the amendments’ written in 1775, and this country has changed.  We update everything, as a country without looking back on the constitution, perhaps we need to update the constitution, although this would be impossible with two parties who never get along, only behind the scenes.

The numbers from CNN Focus group were as follows:

CNN reported last year 32,000 gun-related deaths in America.  CNN also showed a variety of guns to explain the difference, and what gun has been used more often concerning a homicide, a handgun.  72% of the deaths came to be by using a handgun.

The Assault Weapon I would consider the weapon that works quickly and can kill more people, and the weapon used in massive killings.  When someone wants to do harm, use the fastest, and the gun that will do more damage in a short amount of time.

I had mentioned months ago, anyone who is mentally ill should never own a gun, and without records, there is no way of knowing.

I guess I have to say, to make a long story short, the President wins this one, we all know the country is divided, and his numbers nearly reached ¾ of Americans were on his side.

Creation is the Key for Locked Doors

chastitybush May 3, 2018 2
Rambling: Have you ever picked up a book that you were so excited about reading only to find once you opened,…
Writing