The Revenge of The Chicago Bears…

…or The Illinois Wisconsin Border War.
What is going on with the protests in Wisconsin is serious. I could not resist my silly side here though. For those who have read the writer Ogden Nash, consider this Ogden Nash on steroids and part of a warped imagination.

No offense to anyone is meant. If you expect political correctness, stop here. If you want to read a silly take on this, read on. 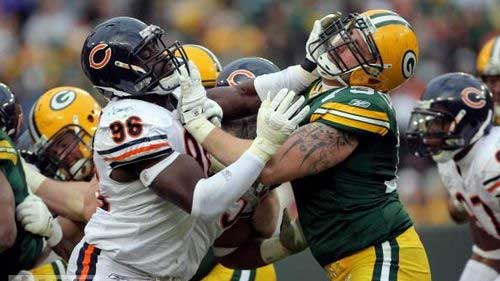 The Green Bay Packers-Chicago Bears playoff game was the biggest in seventy years. It is already the harshest rivalry in professional football. The Green Bay Packers went into the Bears home Soldier Field on won. The only thing at stake was something called the Super Bowl.

Chicagoland wanted revenge. Then the protests in Wisconsin began. Chicagoans stopped complaining briefly about Jay Cutler being a coward and that Coach Lovie Smith should be fired. Do them Cheeseheads want whine with their cheese, they said loudly in taverns and family get-togethers all over Chicagoland.

Then the Wisconsin legislators showed up at the Best Western in Rockford. They were running away from Wisconsin, just over the state line. They thought they were safe.

They might have been safe from the Wisconsin State Police, but not from a vengeful sullen Bears fan base.

When word got out about the fugitive legislators, now known as the “Dodger Badgers,” Bear fandom got to work.

The 911 operator tried to process what she just heard. “Mike Ditka, is missing?”

“No Ditka the Bear,” the heavy Eastern European accent said.

This is going to be a long day, the 911 operator thought to herself. “Yes, Mike Ditka is a Bear.”

“No, not the human Mike Ditka.”

I’m glad this nutter is staying on the line, let me trace the call. The cell towers revealed the call was coming from the Lincoln Park Zoo. Too bad they can’t put this lunatic in the zoo cages. Professionalism must be followed. “Where are you calling from.”

“Lincoln Park Zoo, that is what I am trying to tell you, stupid woman, Ditka, the grizzly bear is not in his cage!”

One would think a seven hundred pound grizzly bear would be hard to miss. “How long has he been missing?”

“I don’t know, I am Eva, one of the zookeepers here. I came to his cage and found him gone.”

This is serious. The call went out to look for Ditka the Bear, but he was nowhere to be found.

The caravan of Bears fans drove the two hours to Rockford. The Dodger Badgers were suddenly greeted by catcalls and hundreds on people wearing Chicago Bears jerseys.

“Look at those guys. Jesus Christ! Break out the artillery!”

The Bears fans suddenly parted for a cage. “Stan! You’re the lunatic who stole Ditka! Stan went to open the cage.

Then the barrage came. Thousands of cheese curds came flying through the air. “Ewwww, cheese curds on my Walter Payton jersey!” “Mommy, I hate cheese curds!” “Shut up and eat what they shoot at you.”

“Just like cheeseheads, bringin’ a knife to a gunfight,” Stan shouted. “Stan, you already did somethin’ stupid in bringin’ that bear, don’t open the damn cage!”

Too late, Stan opened the cage. Luckily, the excitement made Ditka the bear rather sleepy. He went back into hibernation. “Damn bear, he ain’t Ditka, he’s Jay Cutler!”

The Bears fans proved to be more like the Bad News Bears or the Chicago Cubs and drifted away.

Or did they. Picture a Green Bay classroom on Monday. The kids are greeted by a new teacher wearing a Chicago Bears scarf, disrespectful of her surroundings.

I’m Miss Wozniak, and I’m your new teacher, the blonde with the nasal voice of Chicago’s South Side said. Any of ya have any questions?