Los Angeles is offering groceries in exchange for guns.  This is not the first time cities have tried to get guns off the street with gift certificates, etc. but gun owners, especially those with illegal weapons, have more opportunity when it comes to selling their gun, to make more money, and buy more groceries.

The chance of getting guns off the streets, and into the hands of the law, is a long – shot (The Washington Post.) 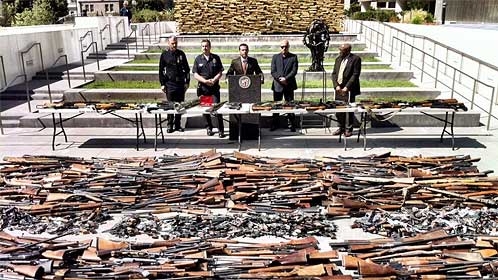 What we need to do is take drastic measures, and confiscate the machine guns, (not a gun lover so I have no idea the names) because to ban guns altogether is unfair to the hunters, or those who need to carry or keep a gun for protection.

What we need in this country is to beef up the care of the mentally ill, give them back the support of our healthcare system, and keep them as long-term care patients, in hopes that they will learn, control, and hopefully become adjusted to certain doses of meds, if this is their problem.

Many people who suffer from various diseases, one to use as an example, Manic Depressive Disorder, love those highs, and will not swallow a pill to ditch the best feeling in their life.  They pretend, like in the movies, to swallow the pill, only to spit it out when no one is looking.  The same thing goes for those who are living in their own Neverland – some feel drugs are poison and refuse treatment.  We are dealing with a variety of illnesses, and different treatments.

The only way we can improve on the lives of those suffering a disease, called mental illness, diseases of the brain – is to address them with long-term care, not a few pills in a bottle, and no supervision while they attempt to help themselves because more often then not, they fail.

I am not a lover of guns, but many people are sporting enthusiasts and their right to hunt should not be taken away.  Many people live or work in tough neighborhoods and need protection.  The neighborhoods will take years to clean up, change, etc., so why not take the people from the neighborhood who are known to be part of the trouble, and rehabilitate – through communication, medication, and long-term hands-on treatment.  This is why we must concentrate on the person with problems, so we never have to face their rage, and insist this country never sells a high powered gun to anyone, those guns are made for war.  Last – forget about a gun collection – go see one inside a locked case in a museum.

The President must address changes to Mental Health Care – and it should be done now, not next year.  We all tried in the 1990s to improve the system, including mental health, but who was it, Louise and her husbands on the news, who thought changing anything was simply not the process.  Now, look at America – what has the GOP congress done to help the people who suffer – to help the small business, and to give a chance to every American, like it was once known – anyone can be President.  Today – anyone with a number – which means, a number that was reached while they were to run the government, they were raising funds.  Put the cap on money-hungry politicians and start thinking of the desperate people with real problems.   We once had our own gun sale as a country.  It is time to wise up, and it is time the people have a say